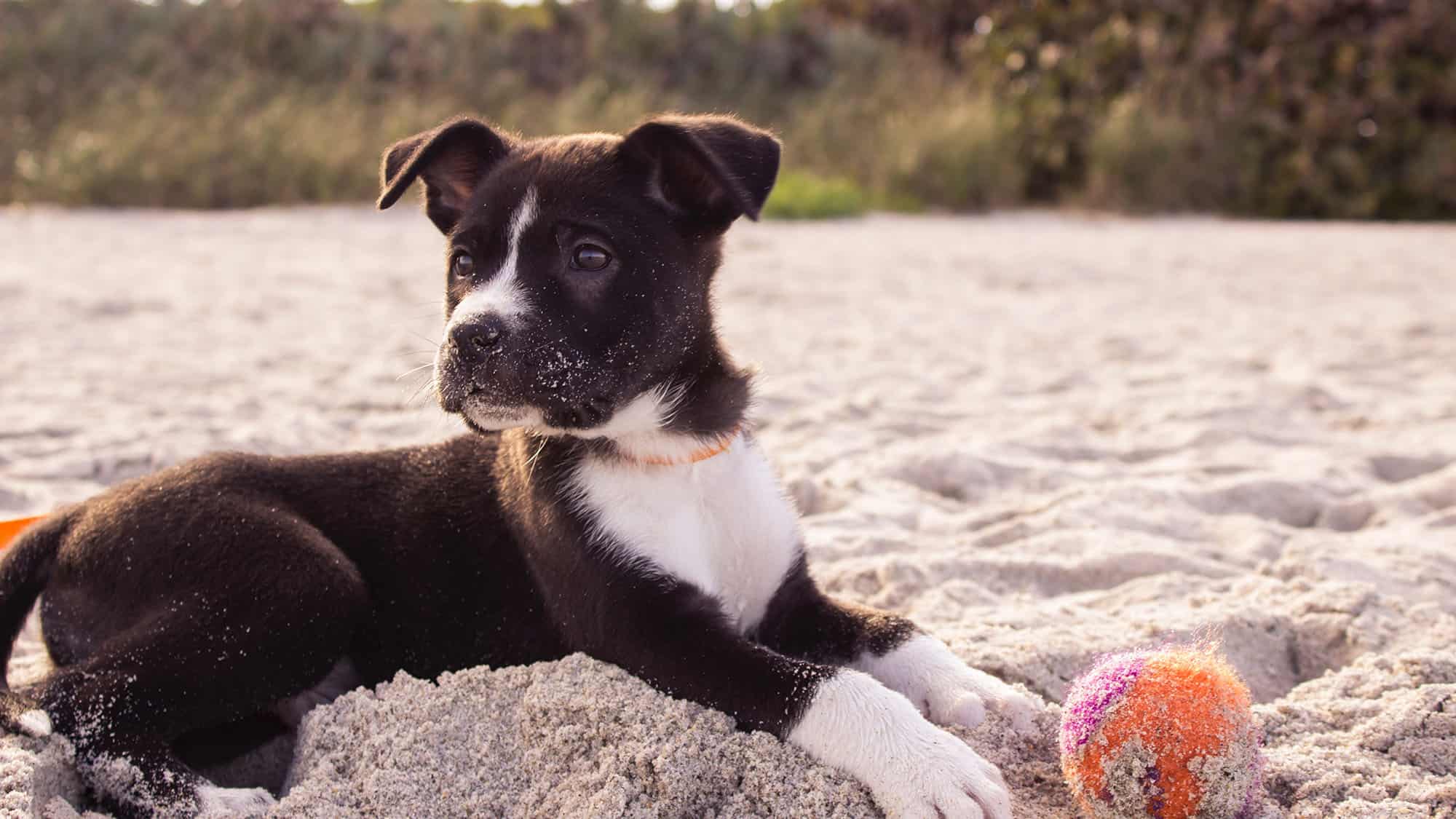 Have you ever wondered what the smartest dog breed in the world is? Or how your dog stacks up?

In this article, we’ll take a look at the top 100 smartest dog breeds and how doggy intelligence is measured. Don’t worry if your pup’s breed doesn’t make the list, having a smart dog may not be as much fun as you’d think.

Copy this code to share the infographic on your site

How is Dog IQ Measured?

Some dogs are particularly adept at solving puzzles but aren’t so great at listening to commands. Some breeds are known for their obedience skills, but also easily fall into the category of “dumb jock.”

So how is dog intelligence ranking done? Most doggy IQ rankings are done using a combination of three separate intelligence measures:

Breeds who show high ability in all three of these categories are ranked higher than others.

A. THE TOP 10 SMARTEST DOGS 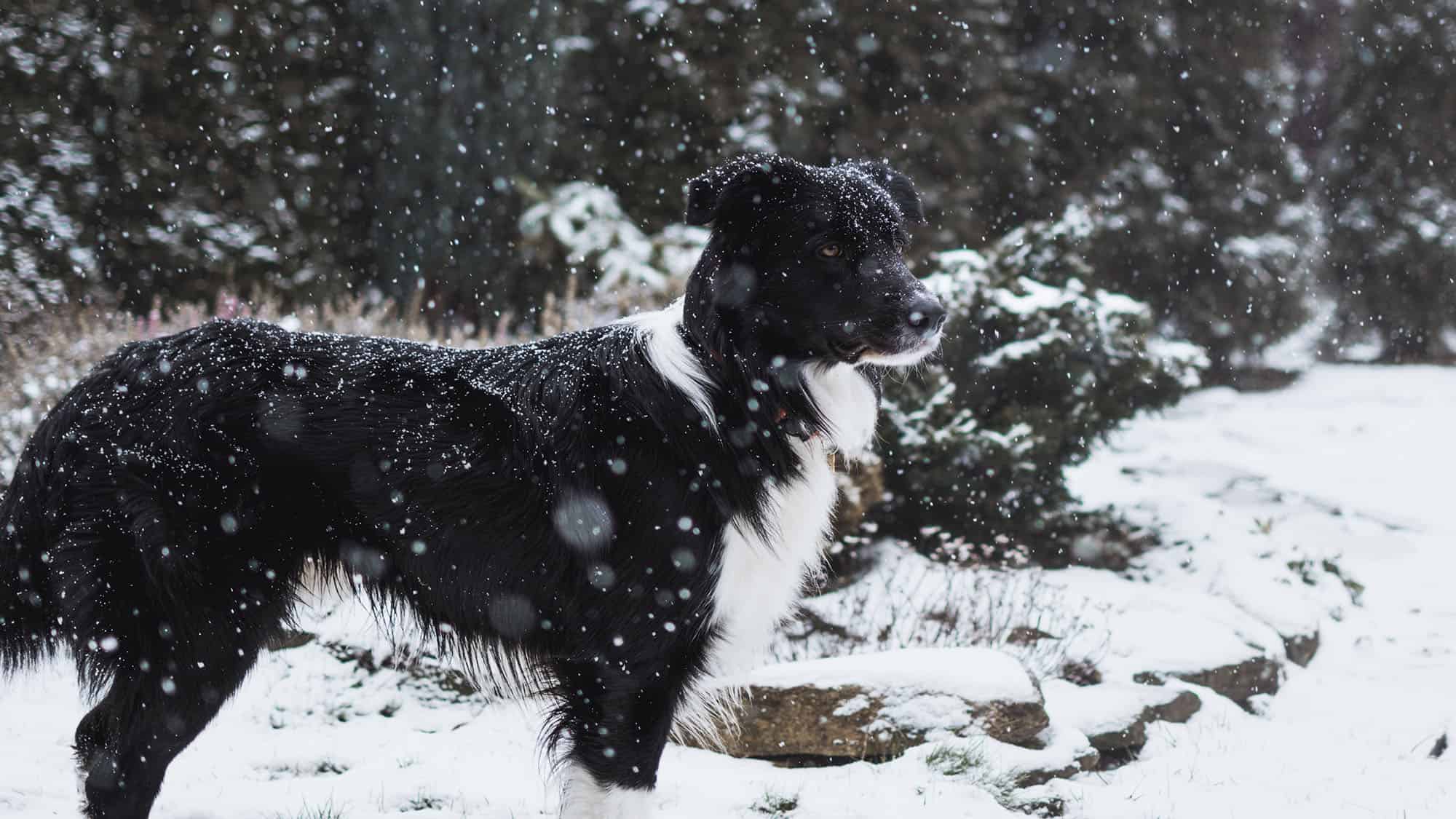 These graceful, medium-sized dogs were bred to listen to complex commands, navigate difficult terrain, and think critically about problems that might arise while herding sheep out in the field.

Thanks in large part to hundreds of years of selective breeding, border collies almost always top the list of smartest dogs no matter the criteria. 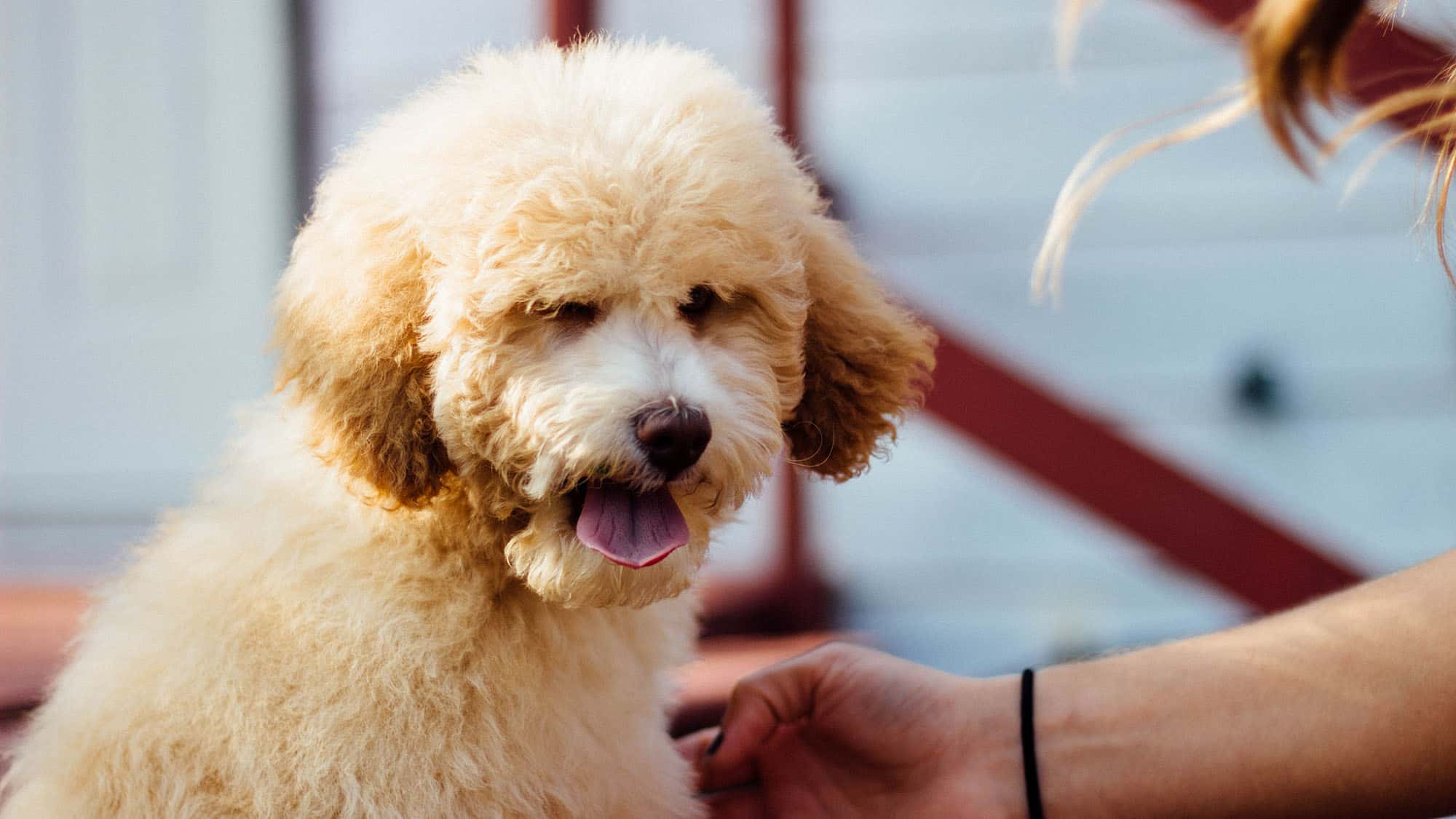 Poodles weren’t bred for complex tasks like the border collie. But what they lack in instinct, they more than make up for in problem-solving skills and obedience.

Poodles are highly trainable and quickly learn and perform new commands with fewer repetitions than the average dog. They’re also a wiz at puzzle games. 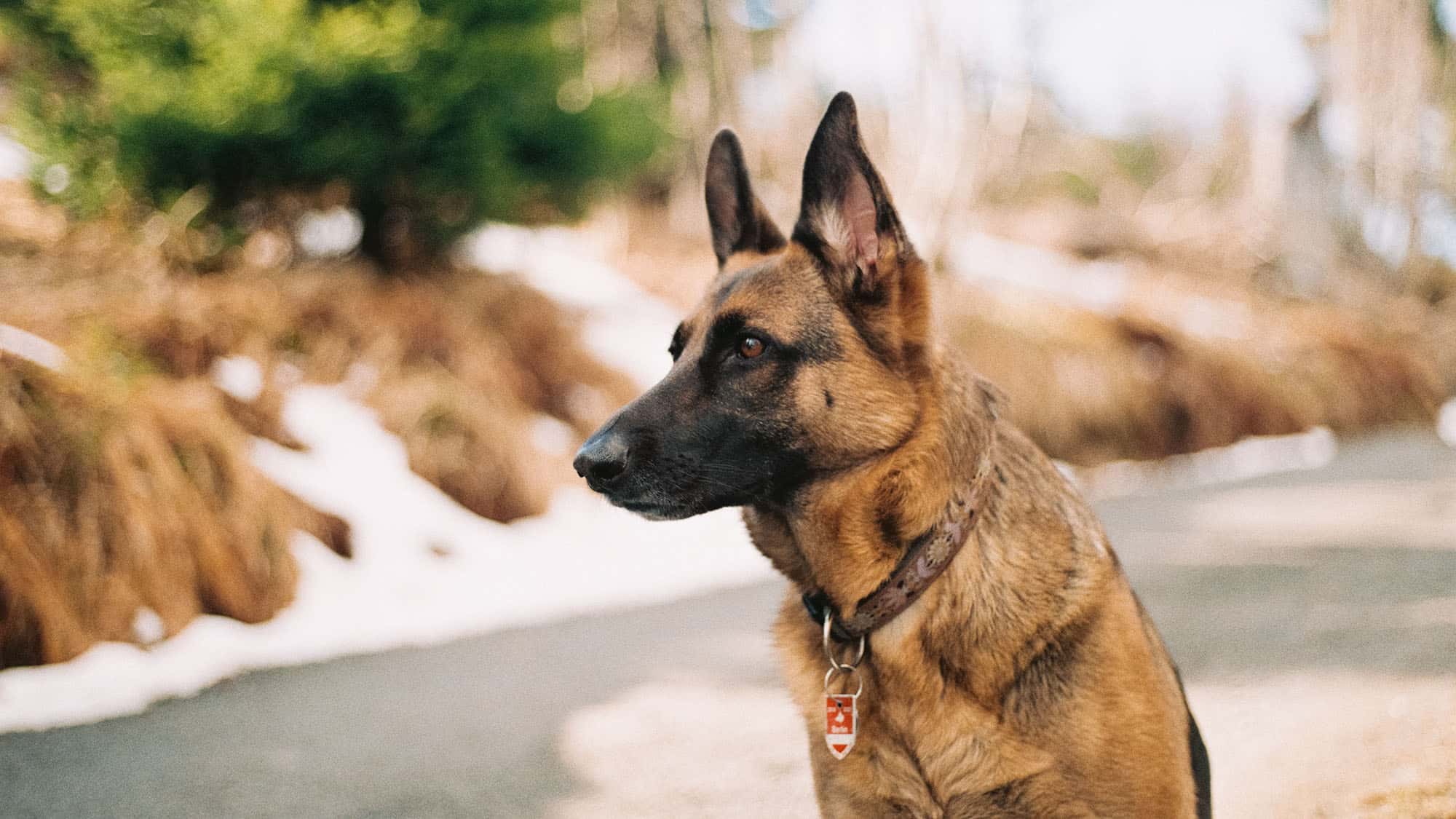 These stoic pups are well known for their use as police dogs and as guard dogs. They were originally bred as herding dogs, and that adaptability is no doubt one reason they land so high on this list.

Germann shepherds learn quickly and demonstrate a unique ability to think critically in new situations without their handler’s help.

Looking for the right food for your shepherd? Our article on the best dog food for german shepherds can help. 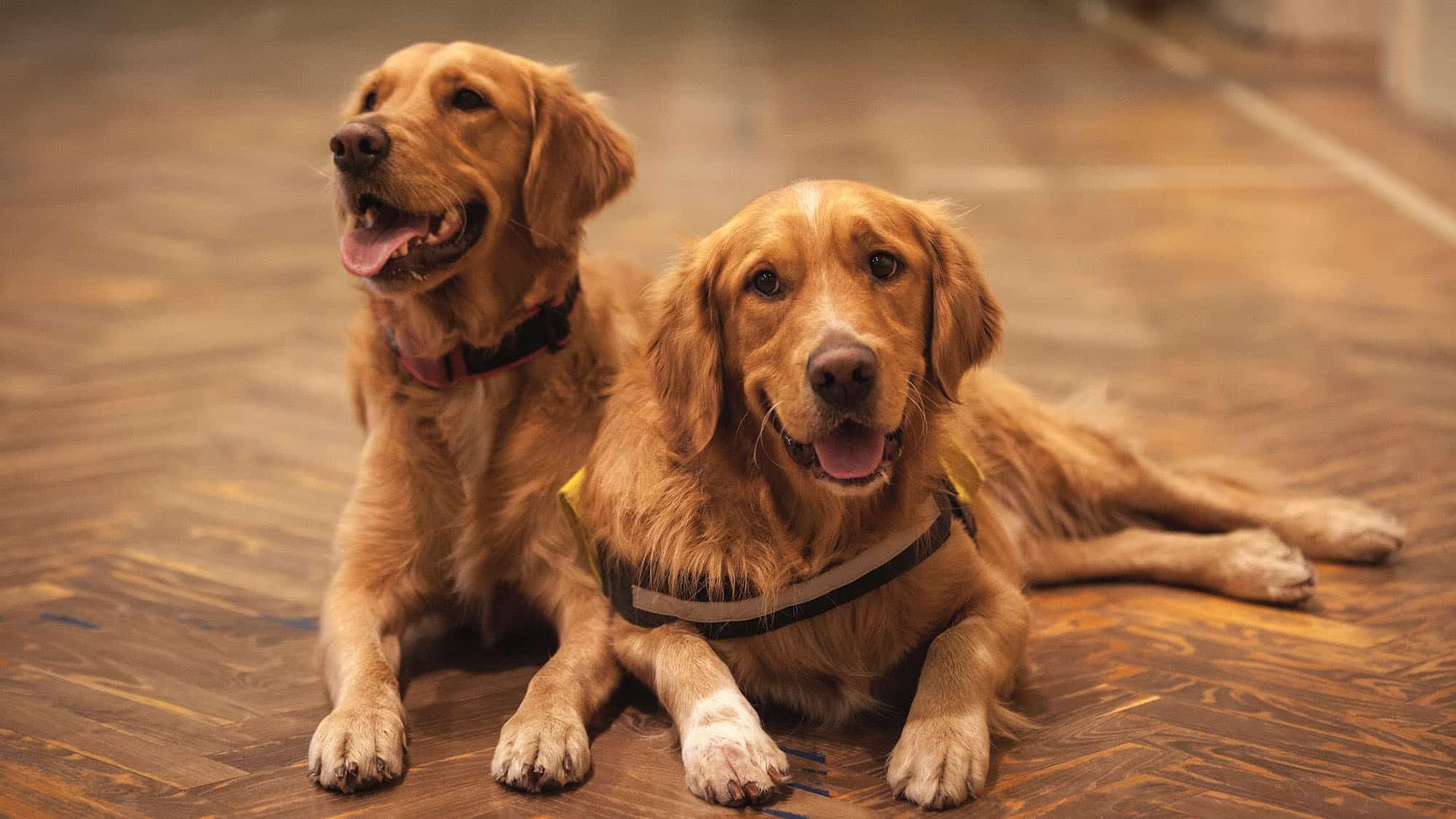 These popular pets are obedient, smart, and have a great personality that makes them perfect for family life.

Goldens were bred to retrieve downed fowl, a task that requires both great listening and obedience skills and a fair amount of independent thought and problem-solving ability. While this breed ranks high in smarts, they do suffer from many health problems and a good diet and frequent check-ups are important. 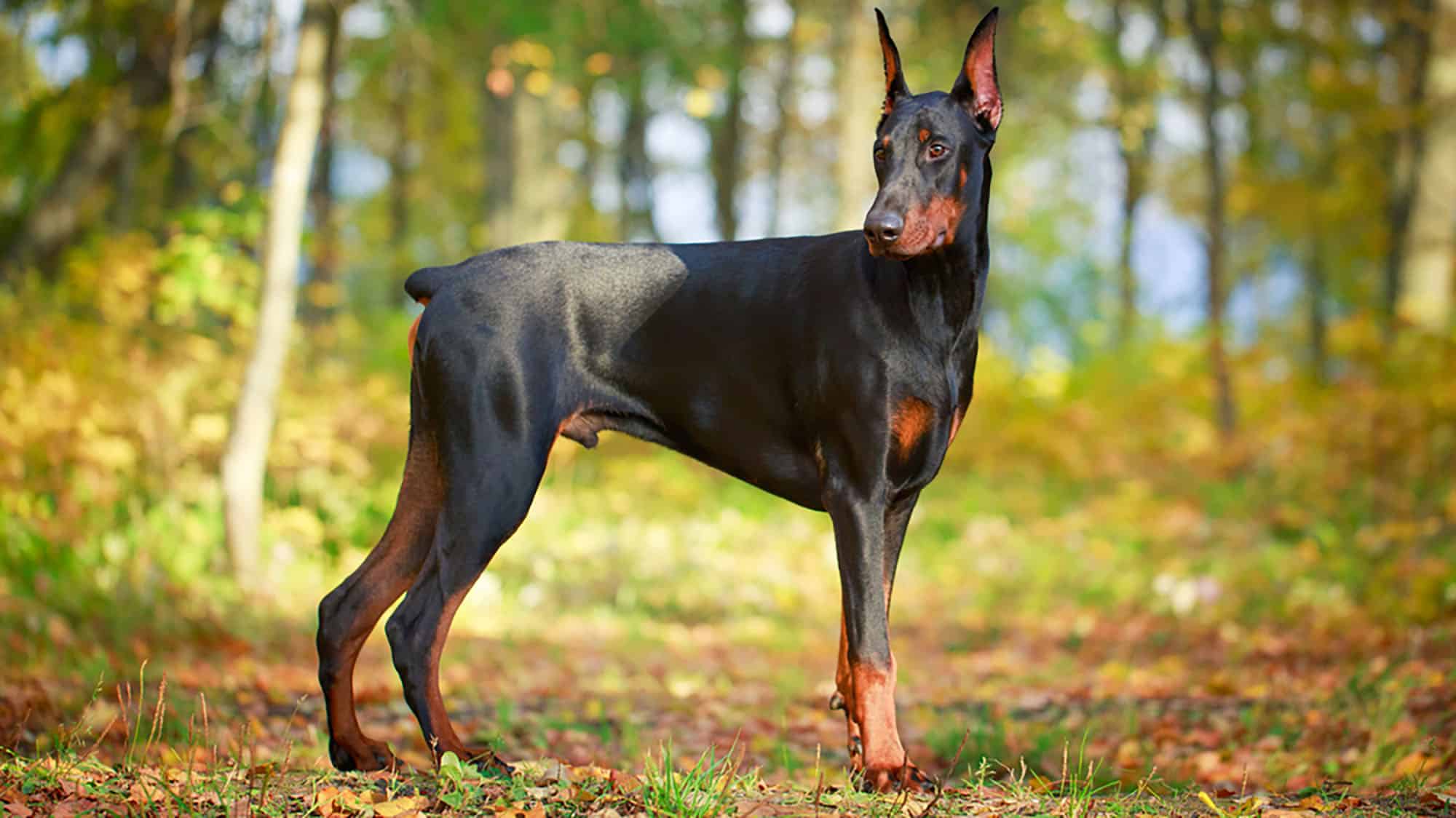 While these dogs are less popular today, they used to be a common sight as both a loyal housepet and fierce guardian. Ironically, their intelligence may be part of the reason their popularity has dropped off.

Dobbies need a lot of stimulation and an outlet for all those smarts. Without that, they can easily become destructive. 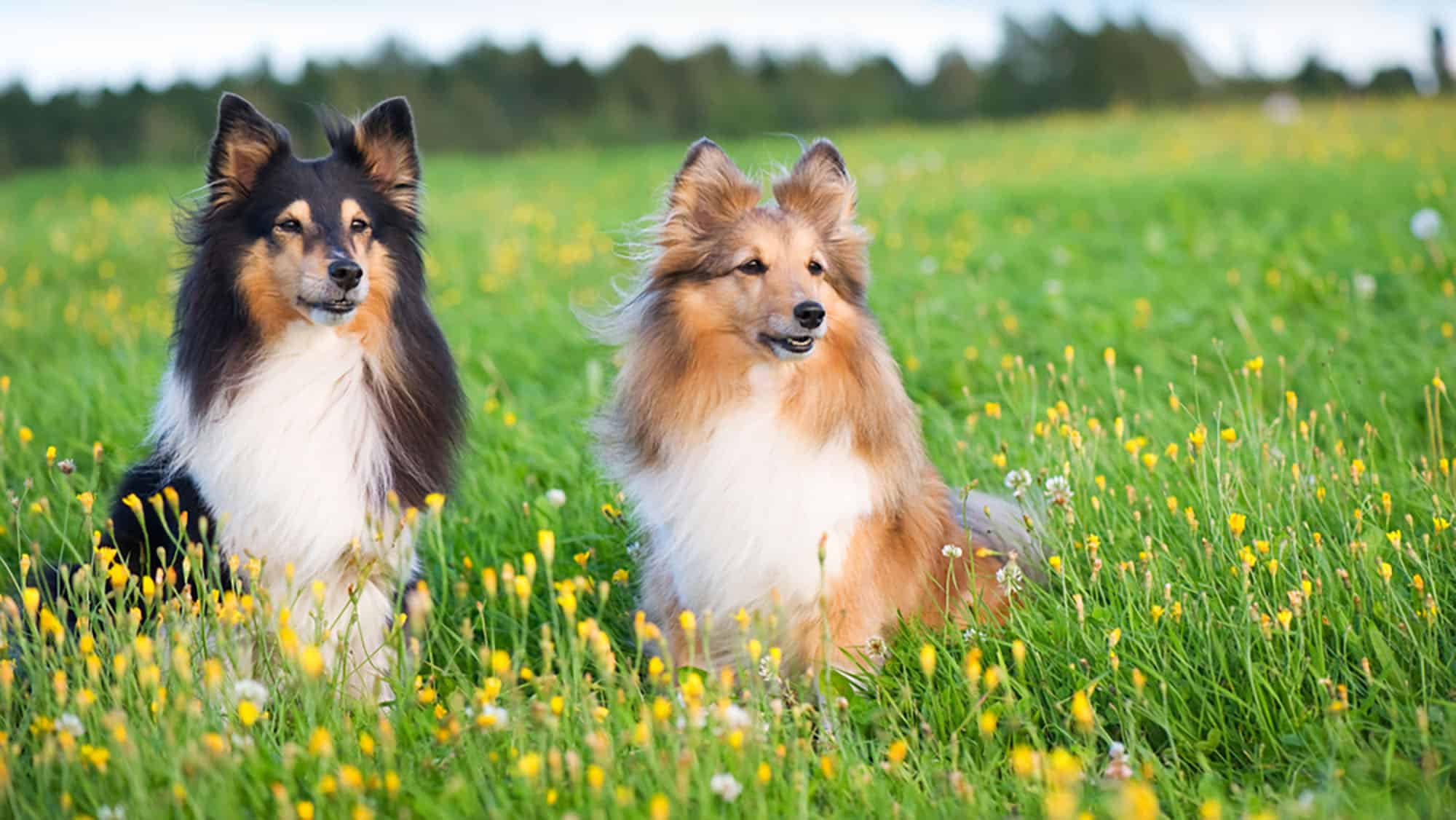 There’s a reason shepherds appear so frequently on this list, and the Sheltie is no exception. These little herders were bred to listen to commands but also work independently to keep rabbits and grazers out of the garden.

Today, the Sheltie is just as smart, and often, just as independent. 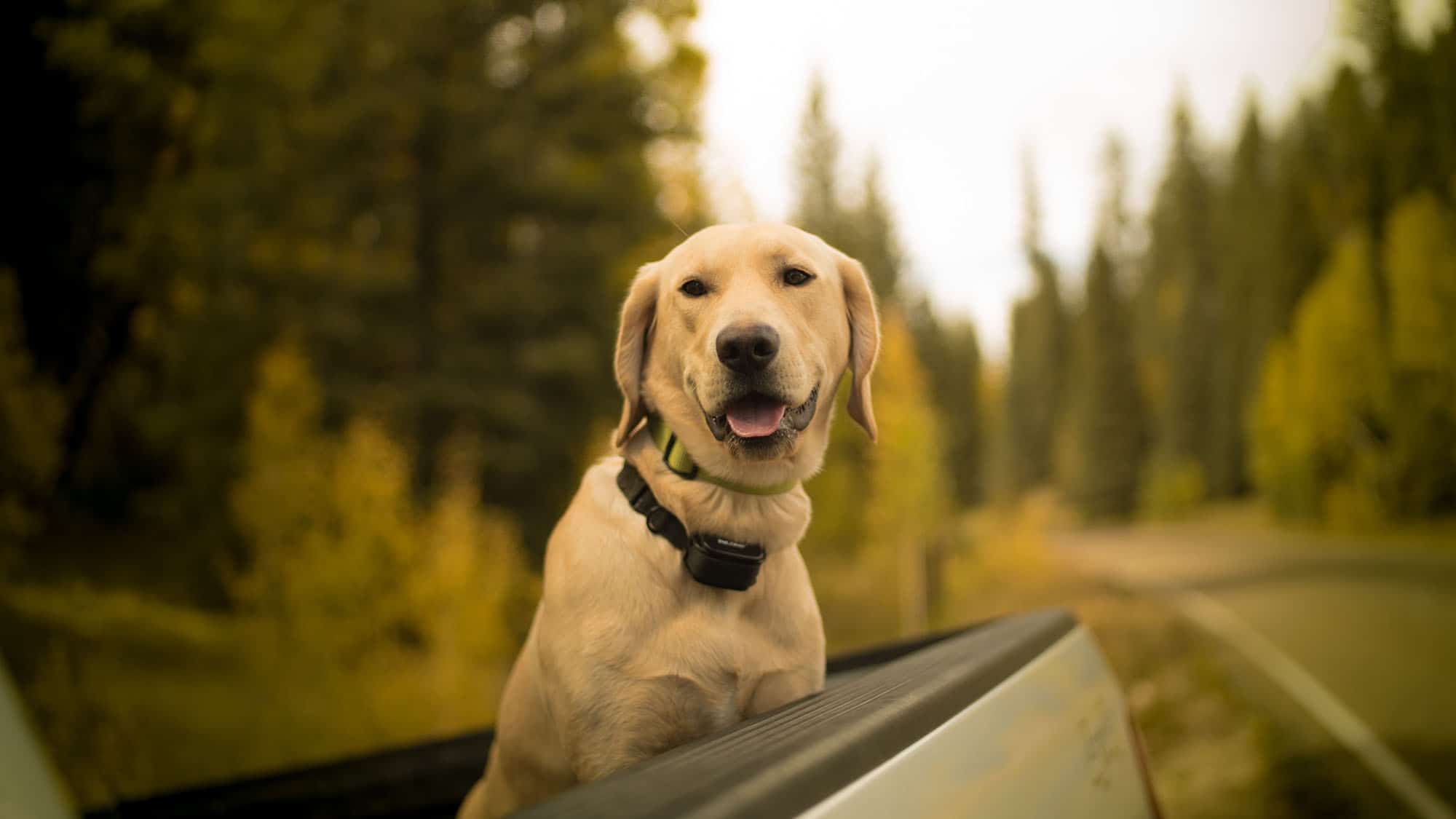 When it comes to trainable dogs and popular breeds, nothing beats the Lab. These happy clowns often hide their intelligence behind a goofy exterior but make no mistake, they are smart.

Like goldens, Labs were bred to retrieve and were required to both listen and problem solve as part of their jobs. While they will eat just about anything, it’s important to choose the right diet to keep these voracious dogs trim and healthy. 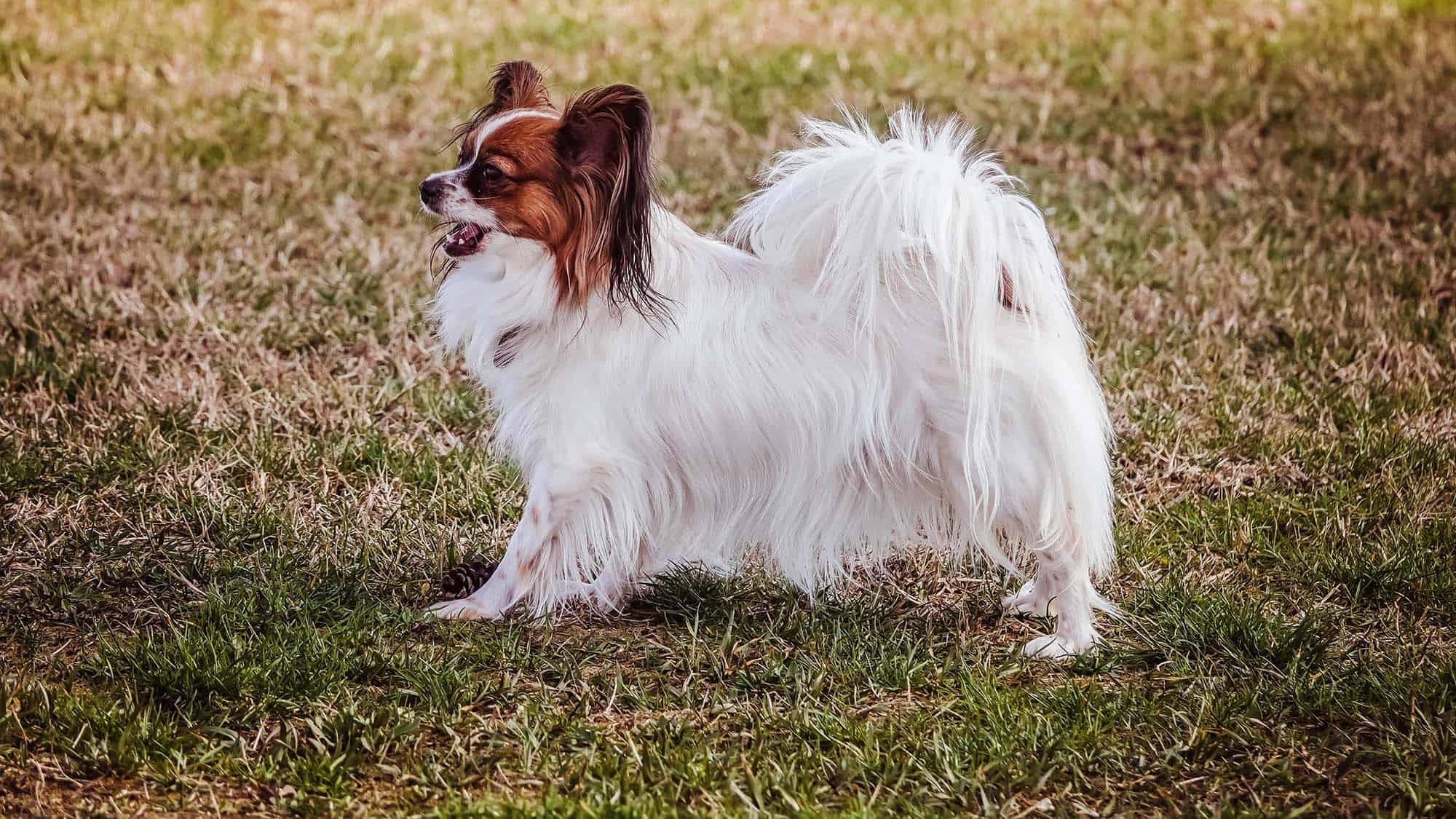 While this little dog may look like a lapdog, they are actually tiny athletes just waiting to be given a command.

Papillons weren’t bred for any specific job other than to entertain French royalty. Maybe that’s why they are so good at learning and performing tricks.

Before you start tapping into your papillon’s athletic potential, make sure you are feeding them the best small breed dog food to keep them healthy. 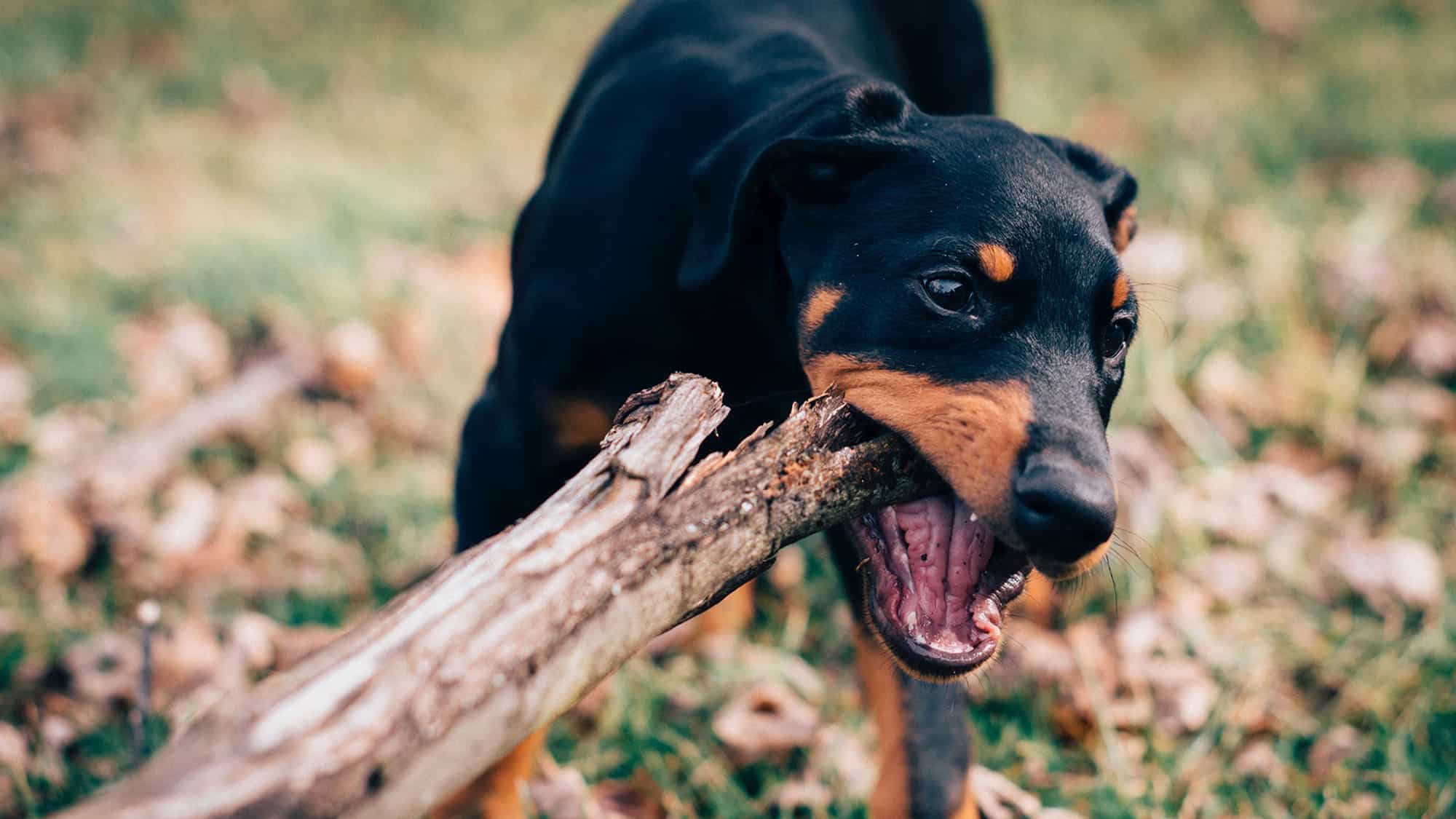 Like many guard breeds, Rotties are incredibly loyal to their people. They learn quickly and have a unique ability to perform their jobs independent of their owner’s presence.

Like many large dog breeds, these big dogs need plenty of exercise and consistent boundaries. 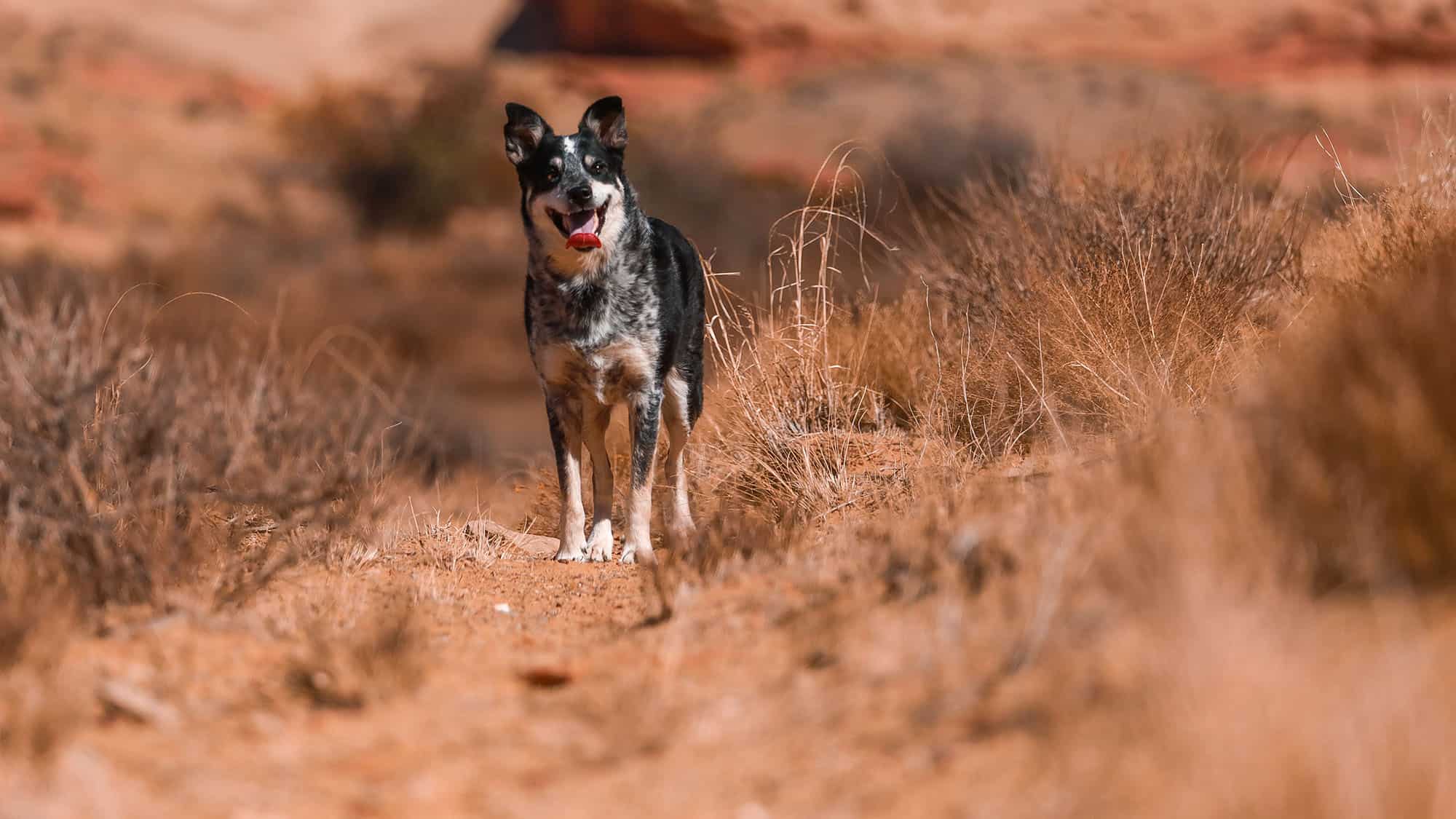 Another herder in the top 10 is the Aussie. These dogs combine a shepherd’s intelligence with courage you’ll only see in a heeler.

These dogs had to outsmart animals much larger than themselves while working the arid ranches of Australia, and those smarts are very much still intact today.

The Different Components of Dog Intelligence

While the three categories of intelligence provide a helpful tool to measure dog IQ, there is more than one way to break down doggy intelligence.

Memory – A dog’s ability to remember things, whether commands or locations, plays a huge part in their overall intelligence.

Troubleshooting Ability – Being able to solve problems like puzzle toys are another commonly tested area of a dog’s IQ.

Social Intelligence – Just like with humans, how intelligently a dog is able to socialize and communicate with other dogs plays into their overall IQ.

Ability to Understand Humans – In order to learn commands and new behaviors, a dog must be able to understand their human.

Ability to Communicate with Humans – Of course, being able to express their needs back to their humans is also an important aspect of intelligence, especially if a dog can express more complex concepts like motioning to where a treat is stuck.

Impulse Control – Without the ability to control one’s impulses, even the smartest dog would not be able to act on the thoughts they had without getting in their own way.

How Smart is Your Dog? 3 Easy Ways to Test Doggy Intelligence

Don’t believe your dog’s breed should have been left off the list (or included?). Luckily there are some easy games you can do at home to test your dog’s intelligence.

Let your dog watch you hide a treat in a room, then leave the room without letting them get it. Come back five or ten minutes later and see if your dog remembers where you hid the treat.

The longer they can go and still remember where the treat is, the better their memory.

Build a puzzle toy out of an old milk carton by cutting a small hole in the center of one side. Put a handful of kibble in the carton, give it to your dog and watch them.

Kibble meant for large breed dogs work especially well for this game. Check out this article to find the best brand.

Pick a random word like “flower” or “unicorn” and grab a large handful of tasty treats. Say your word then treat your dog over and over.

The average dog will build a connection between the word and impending treat after about 40 repetitions. If your dog looks at you expectantly after you say the word earlier than that, they are smarter than the average pup!

How did your dog do with the above tests? If they didn’t perform like a champ, don’t worry, having a super-smart dog may be more trouble than it’s worth.

In his book The Intelligence of Dogs, Stanley Coren talks at length about the difficulties that come with owning a dog with a higher than average IQ.

While an intelligent pup is a must if you need a working dog (think search and rescue, police force, bomb sniffer) or plan on competing with your pooch in agility or field trials, a dog with average intelligence is probably the best dog to own for the average person.

Highly intelligent dogs require a lot of mental stimulation. While the average dog is happy to wait eight hours for you to get home, a smart dog will get bored and is likely to entertain themselves by chewing up a pair of shoes or finding their way out of the yard.

Even when they do receive enough mental stimulation, hyper-smart dogs still tend to get themselves into trouble.

One of the smartest dogs I ever knew was a great Pyrenese named Cody who came to the kennel I worked at in high school. Cody was especially adept at opening kennels and was observant enough to know when he wasn’t locked in.

One day my coworker arrived at the kennel in the morning to find that someone had forgotten to clip Cody’s kennel shut the night before. Not only had the giant white dog let himself out of his kennel, but he had gone around to the 56 other kennels in the building and let every other dog out.

It was pandemonium. All at the paws of an exceptionally smart pooch.

I can only imagine what it was like to live with that dog!

It’s common for intelligent dogs to outsmart their caretakers like this. They tend to be hyper-observant, have great memories, and make associations between different items that most dogs would never be able to.

The only way to cohabitate with an extra-smart dog is to give them a job. If they have something to keep them occupied, they’re less likely to use their brainpower for the wrong things.

Of course, the average owner will get a puppy because they want a companion, not a coworker.

If your goal is to get a dog because you want someone there to greet you at the end of the day (in a house that’s not destroyed), maybe consider any of the breeds listed in the last two categories of our list. Many of these are obedient dog breeds that can be easily trained but are less likely to outsmart their owners.

But, by all means, if you’re up for a challenge, the dog breeds in the top 20 are a great choice. But you probably want to load up on puzzle toys, training books, and look into doggy daycare before you bring one of these Einstein puppies home.