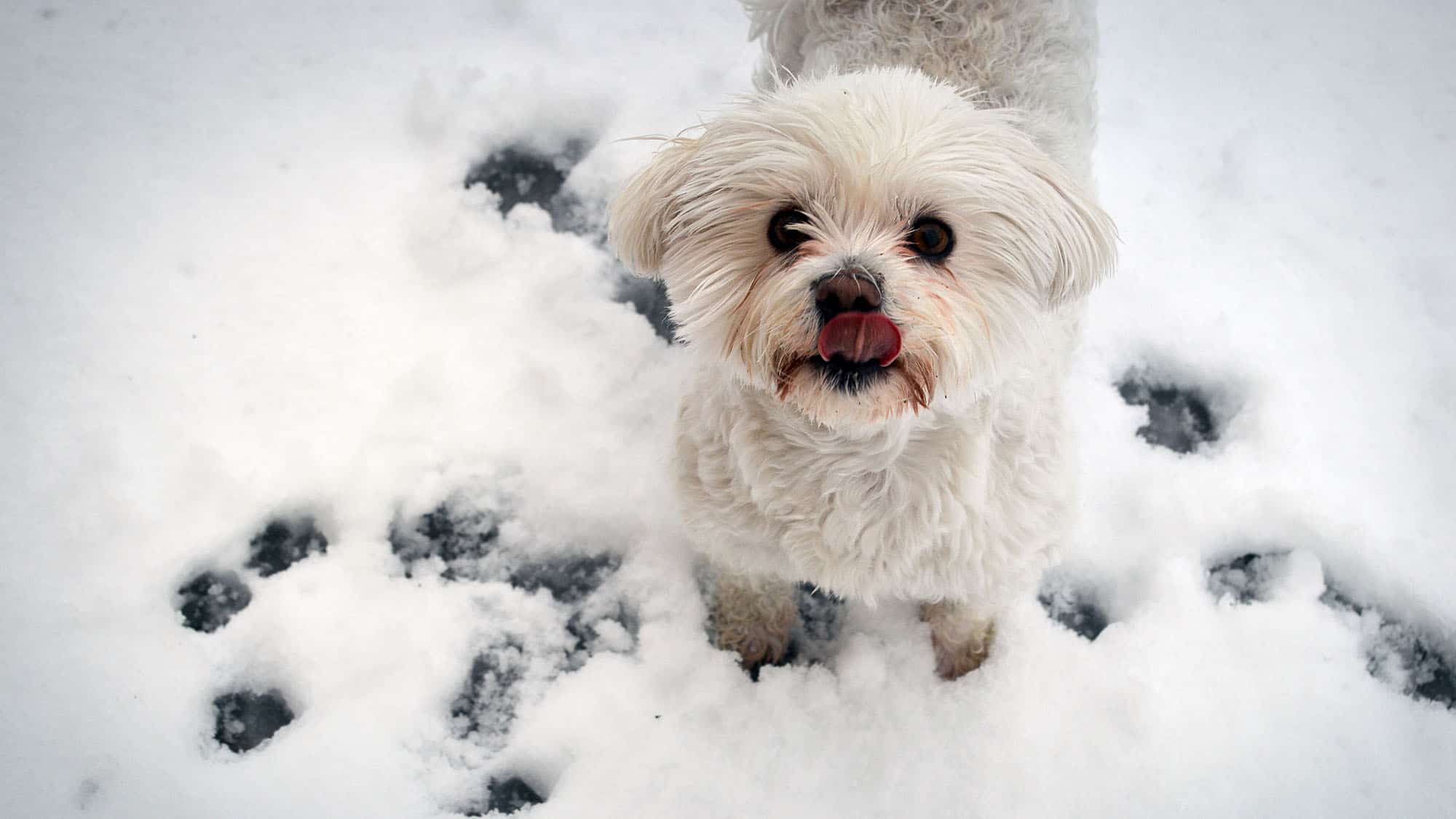 The Maltese, also known as the Mortise Dog, is a toy breed known for its white coat and small stature. The breed first came from the island of Malta. They love being pampered and prefer to cuddle up in their owner’s lap.

However, do not let their small size and cute demeanor fool you. Maltese are tough animals that act much larger than they are. They are not afraid of intruders and will actively seek out or bark at any unfamiliar noise.

That trait shows their inherent loyalty and strong protective nature. The dogs quickly bond with families and make a great addition to any home.

Though White Maltese are the only purebred Maltese out there, cross breeding can lead to interesting mixes like the Maltipoo Dog, Maltese American, teacup Maltese dogs, or the Black Maltese. Brown Maltese puppies exist as well. 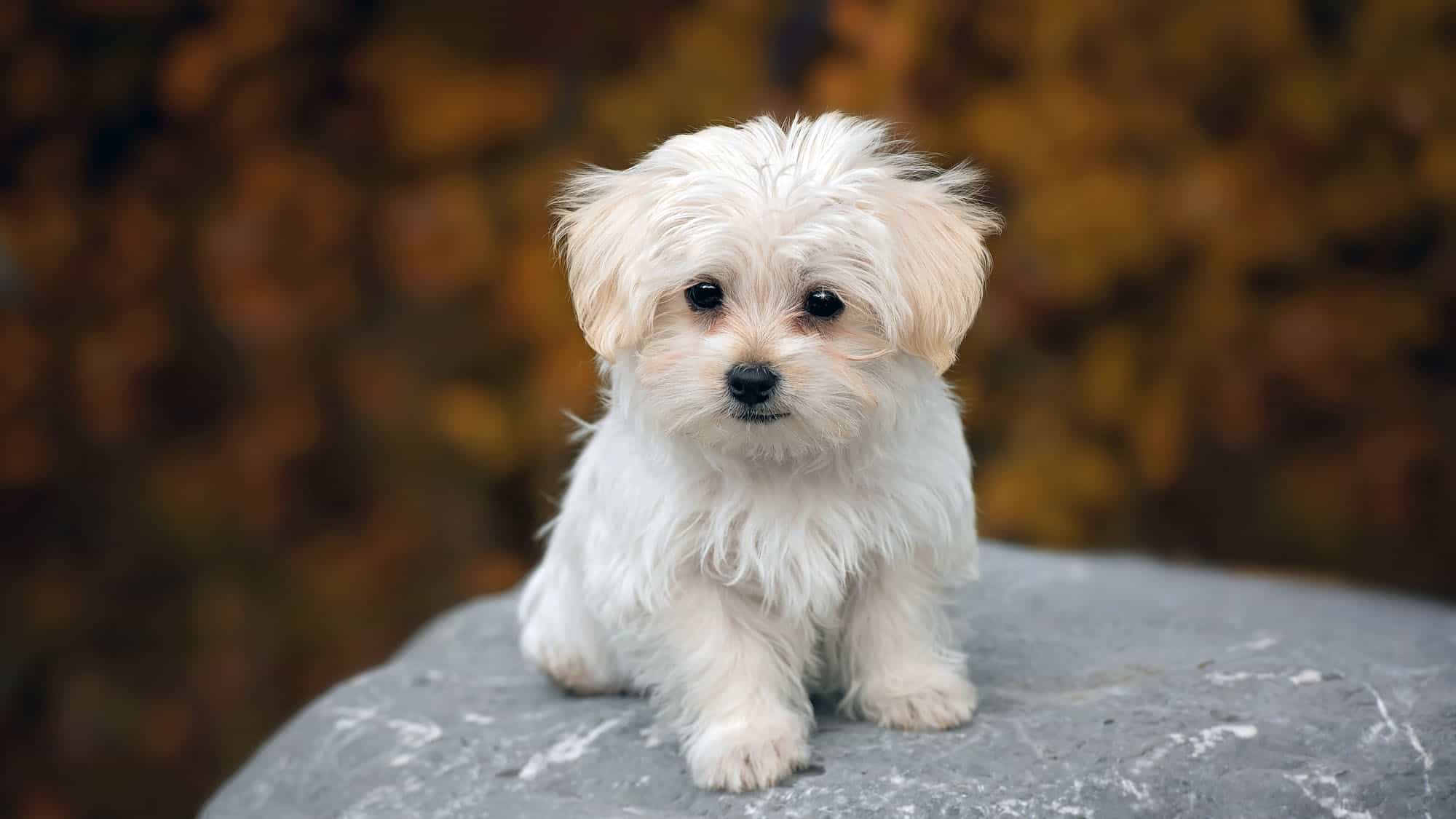 Toy Maltese are rambunctious dogs that act much like they look. The cute canines are loving animals that prefer to spend time with their family. They do well with most humans, especially if properly exposed while young.

That bond is so strong that the breed can experience separation anxiety if left alone for more than a few hours at a time. As such, make sure to get them a great small dog bed that you can place near where you hang out at home.

Though they are a small breed, the animals do not shy away from threats or danger. Maltese are incredibly loyal, and they will quickly investigate or bark at any strange noise or intrusion they do not recognize.

While that yapping makes them a bit louder than other toy breeds, the dogs are also quite easy to train. They love learning new tricks and respond well to firm but positive reinforcement.

2. How to Care for a Maltese

Many people ask, how big do Malteses get? The answer, not that big. The toy breed stays small their entire life, which is why they don’t need a lot of food.

It is best to feed your pup small portions of premium small dog food three times a day until they reach nine months of age. From there, you should cut it down to two for a Maltese full grown.

Free-feeding, where you leave out a small portion of food for your dog to snack on during the day, is recommended for newborn or extremely young Maltese puppies.

In terms of food, Maltese do well with high-end kibble. Dry food, such as the ones listed here, is great to keep their teeth healthy in a way that wet food doesn’t.

Do your research and understand the different ways you can get your dog the nutrients they need.

Ask anyone “what does a Maltese dog look like?,” and they will discuss the breed’s fluffy white coat. The Maltese dog hypoallergenic coat is the breed’s calling card, but it takes a lot of attention to properly maintain.

How often you groom your pup depends on the length of their fur. A short coat can be groomed once a week, while Maltese long hair can be groomed two or three times in that span.

It is also important to give your Maltese a bath roughly once every three weeks. Just be sure to comb them before the soak to stop any mats from building up.

You want to wipe down your Maltese’s face once a day and trim their nails every month and a half. Maltese tails should be properly groomed as well.

Maltese are small dogs that don’t mind being indoors. Even so, a brisk 30-minute walk each day will keep them lean and allow them to explore new areas without becoming too overwhelmed or nervous.

The breed, despite their small legs, can go for quite a while. Do not hold back in fear of overworking them. In fact, investing in a good backpack carrier can help you get them to new and exciting places.

A simple game of fetch, while not always a substitute for a walk, also goes a long way towards keeping your Maltese happy and healthy.

Maltese are small dogs that love being in charge. They are incredibly smart, which allows them to properly respond to all kinds of training.

The canines can be extremely territorial, but that can be alleviated with proper socialization early in life.

The breed is also quite sensitive. This is important to make note of because you never want to yell or harshly punish your Maltese. Rather, be patient and give them a safe space, such as a high-end crate, to go to. 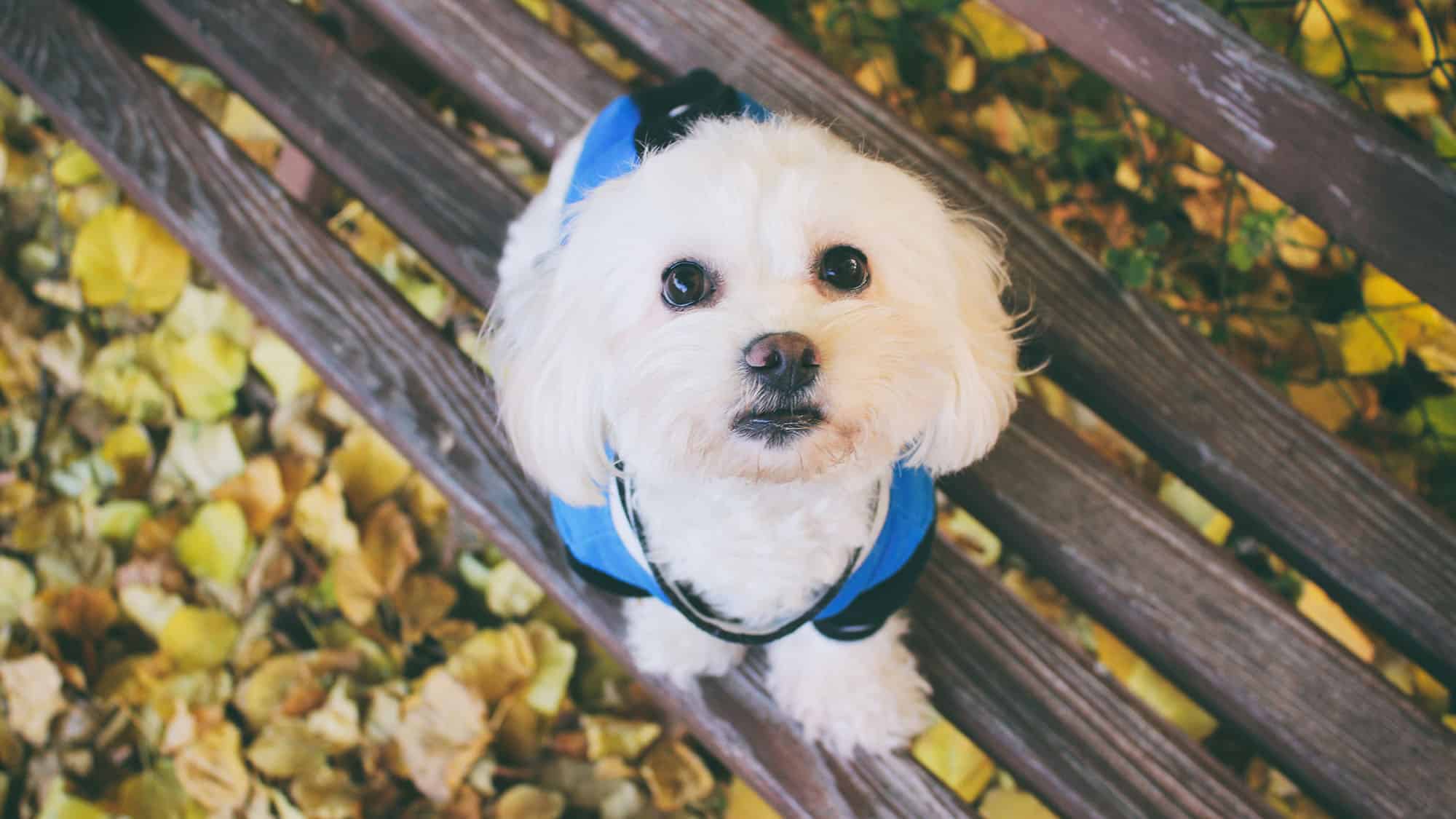 3. Common Health Issues of the Maltese

The Maltese lifespan ranges from 12 to 15 years. That extended time is a result of good genetics, but it does not mean the breed is completely free from harm.

Maltese, like many smaller dog breeds, can easily develop breathing problems over their lifetime. There are prone to quite a few conditions, but asthma is the most common.

It is not always easy to tell if your dog has a condition. Always monitor their breathing and see how easily they take in air. Any difficulty in that area requires an immediate trip to the vet.

Though treatment is not always an option, medication can be used to control different symptoms.

Collapsed trachea is one of the more severe Maltese health problems. It occurs when the cartilage around the windpipe weakens to the point where the walls collapse inward. That greatly restricts breathing and leads to coughing, wheezing, or an inability to exercise.

Though collapsed tracheas are hereditary, they can be treated. Medicine works for mild cases, while surgery is the answer if the condition becomes more severe.

Like many other toy breeds, Maltese are prone to liver shunts. This condition, also known as portosystemic shunts, restricts blood flow to the liver. That can then cause issues throughout the entire body.

Though milder cases typically come with no symptoms, Maltese with more advanced shunts can experience dizziness, extreme pacing, weakness, diarrhea, drooling, increased thirst, and constipation. If your dog shows a combination of such problems, take it to the vet as soon as you can. 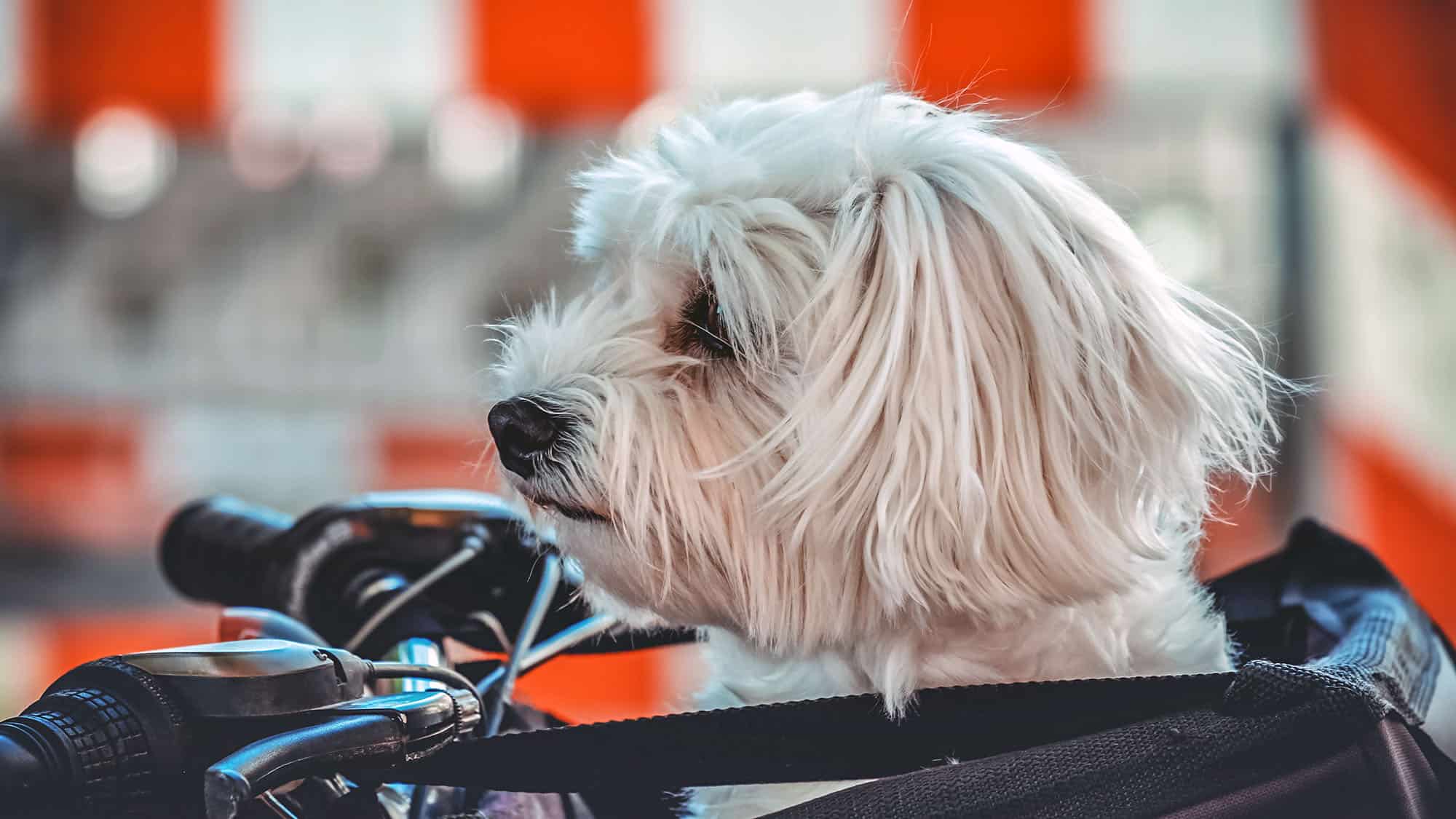 Maltese, despite their tough personality, make great companions for older children or kids that know how to handle themselves around small animals. The breed loves to cuddle and will spend a lot of time playing with a child they trust.

However, they are not the best dogs to have around young children. Not only can toddlers accidentally harm the fragile animals, but they may lash out when hurt or threatened.

Maltese, in line with their territorial nature, do not often tolerate other dogs in their space. They can get along with any they are raised with, but tend to challenge larger breeds. They do get along with cats, but not small mammals.

5. The History of the Maltese

The Maltese likely started out as a Splitz-type dog, possibly the Tibetan Terrier, somewhere in Asia. Though nobody knows their exact origin, evidence suggests they came to Europe via the Middle East.

The breed then developed on the island of Malta, which is how they get their name. At the time, they were used on ships and found great popularity among women, who took them in carriages or carried them in their sleeves.

While originally isolated, travelers soon brought the dog to many countries around the world. During the mid 19th century they became extremely popular show dogs in Britain and great home companions in the United States.

In both instances, the breed’s gentle nature and cute appearance made them fantastic family dogs.

6. The Regular Expenses of Owning a Maltese

Maltese from well-respected breeders cost between $1000 and $4000. However, adopted dogs can go for the mid hundreds.

Maltese dogs are cute and quick to find homes. Even so, a few key groups work hard to help connect the loving breed with equally loving owners.