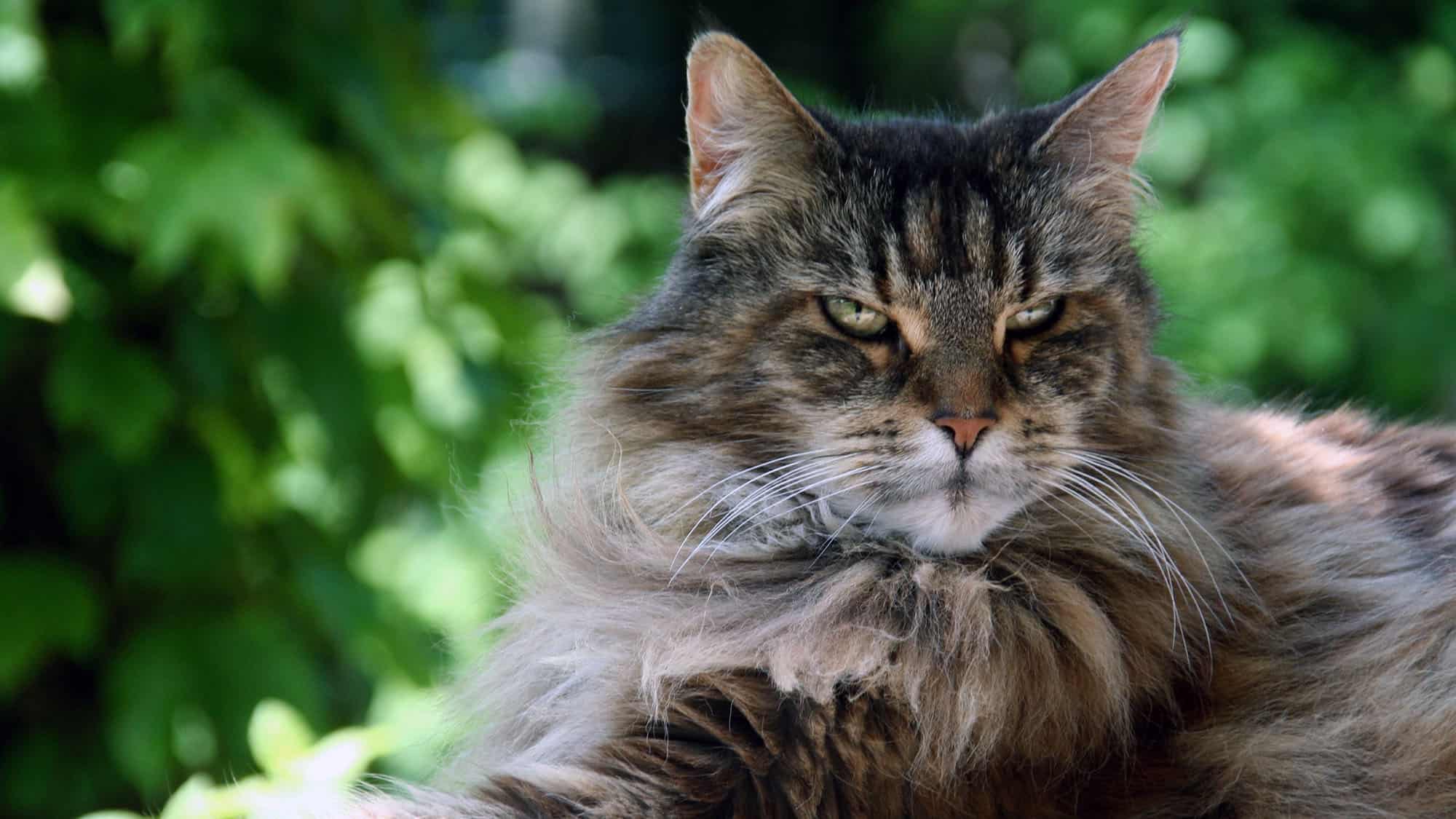 The largest domestic cat on Earth, Maine Coons are cherished for their affection and cuddly nature. They make wonderful family pets and quickly take to both children and adults.

They are extremely social animals. Though they do not have a lot of energy, which may surprise people based on their size, the Maine Coon Cat’s personality is a curious one. They like to relax, but are not afraid to wander off when given the chance.

Many breeders consider Maine Coons dogs of the cat world. That is a title they proudly wear. Not only do the felines form strong bonds with their owners, but they also love to play and can even fetch.

If you’re looking for a sturdy, intelligent cat that can be taught tricks, the Maine Coon is the way to go. 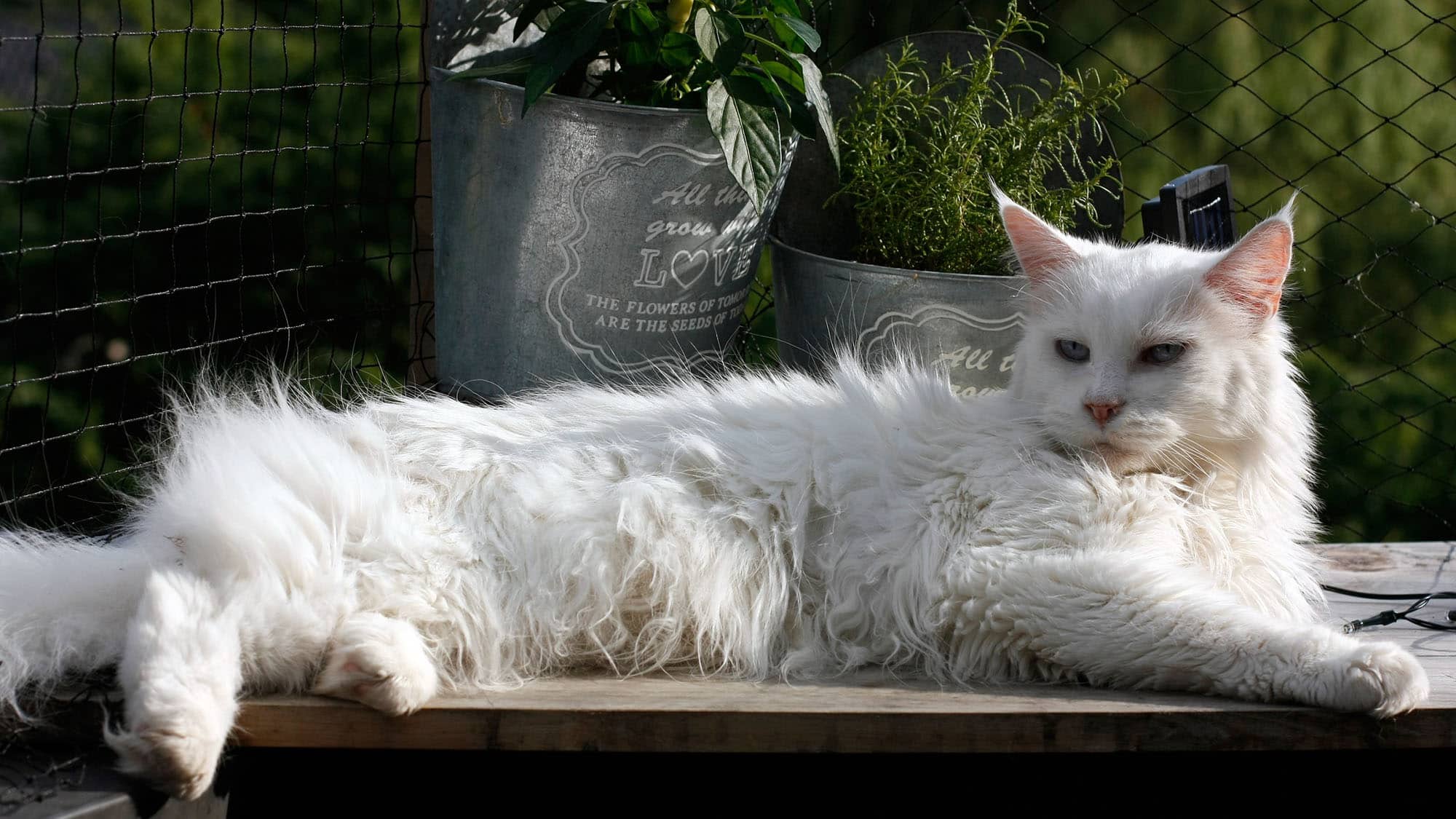 Maine Coons are sometimes referred to as “gentle giants,” and for good reason. The large felines are extremely friendly. So much so that they get along with everyone in the household.

The breed is marked by a general curiosity. They love to explore, love to adventure, and will travel off on their own when given the chance.

However, they also like to socialize with other people and pets. In fact, that is one of the key Maine Coon traits. The felines are so affectionate that many consider them to be the dogs of the cat world.

2. How to Care for a Maine Coon

Maine Coons do not need special food to thrive. The cats do well on raw, wet, and dry diets, with dry being the best because it actively cleans their teeth.

Just be sure to pick a premium, protein forward brand. The large felines need quite a bit of energy to move around and you want to make sure your Maine Coon full grown gets its fill.

When it comes to feeding, Maine Coon kittens should get special young cat food up until they reach nine months. From there, you can switch to more traditional options.

Maine Coons are large cats with a lot of fur. Daily brushings with a soft bristle brush will help keep their coats in check and prevent excess shedding. This works to prevent mats as well.

While most cats don’t need baths, a dip can help Maine Coons keep their shaggy coat in check. Wash your cat roughly once every two months, and don’t be afraid to do more if they get particularly dirty.

Clip their claws and trim back the fur on their paws. That will prevent them from tugging at their coat.

Unlike most animals, Maine Coons do not need a lot of exercise to live full, healthy lives. The cats, though large, are not built for long distance running. Rather, they do well in short bursts.

If you keep yours inside, try for twenty to thirty minutes of play each day. That typically means letting them play with a wand or similar toy. If you leash or harness train them, a quick walk around the block works as well.

Maine Coons are strong, intelligent cats. That means you can train them in a few different ways. Not only can they learn a few different tricks, but they respond well to both litter and harness training.

Positive reinforcement works with the cats, especially if that comes in the form of treats. Clickers or specific hand motions also work well because it helps the felines associate a specific sound or motion with rewards. 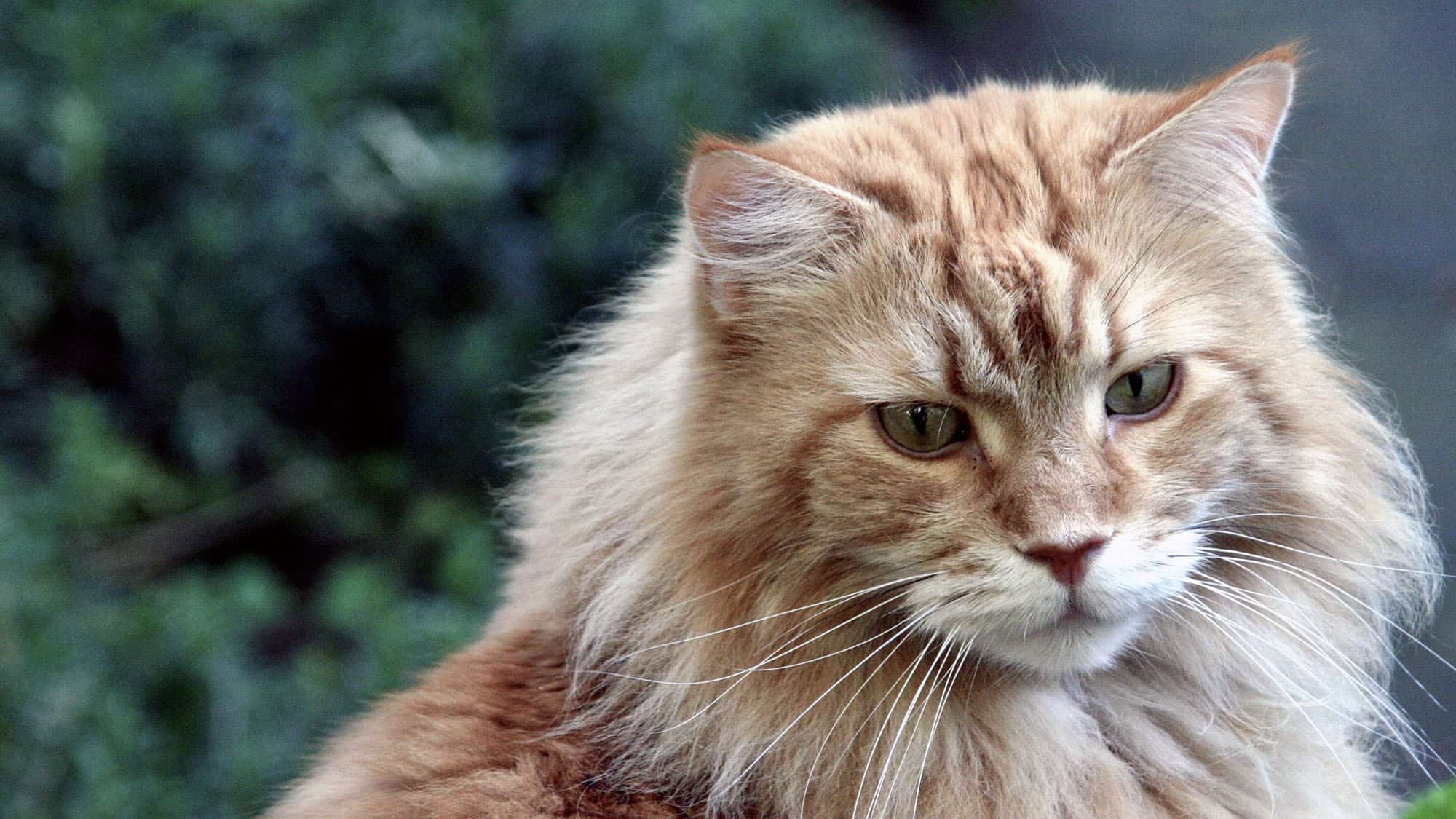 When breaking down Maine Coon health, many ask “how long do Maine Coons live?” The breed typically makes it 10 to 13 years, with a bit of wiggle room depending on their disease history. They tend to live long lives, but are prone to quite a few health issues.

Polycystic kidney disease is an inherent condition that, when left untreated, can lead to kidney failure. It shows up in a few different breeds, including the Maine Coon.

Unfortunately, polycystic kidney disease is extremely tough to detect. While early trips to the vet may catch it, most symptoms don’t show up until it’s much too late.

Trusted Maine Coon cat breeders will help you avoid owning a cat with the disease. However, if it is too late for that, dietary changes like adding high-quality protein supplements and reducing sodium intake can help curb some problems.

HCM is one of the most common health issues in cat breeds. The condition occurs when the walls of the heart slowly thicken in a way that reduces how well the heart can pump blood throughout the body.

Such strain makes it harder for your cat to breathe and may even lead to total oxygen deprivation throughout the heart. It can also manifest in fatigue.

The disease typically sets in during the later stages of life. Though not easy to detect, early screenings can catch it in a way that will provide your feline with a better quality of life.

Due to their wide frame, Maine Coons are susceptible to spinal muscular atrophy. This is yet another genetic disease that can be avoided through good breeding. It causes the motor neurons in the lower spinal cord to break down and weakens muscles in the hind limbs.

Both of those issues commonly lead to general instability in your cats hips and legs. Always watch how your cat walks and see if they move with any pain or discomfort. If they do, it is best to take them to your vet for tests. 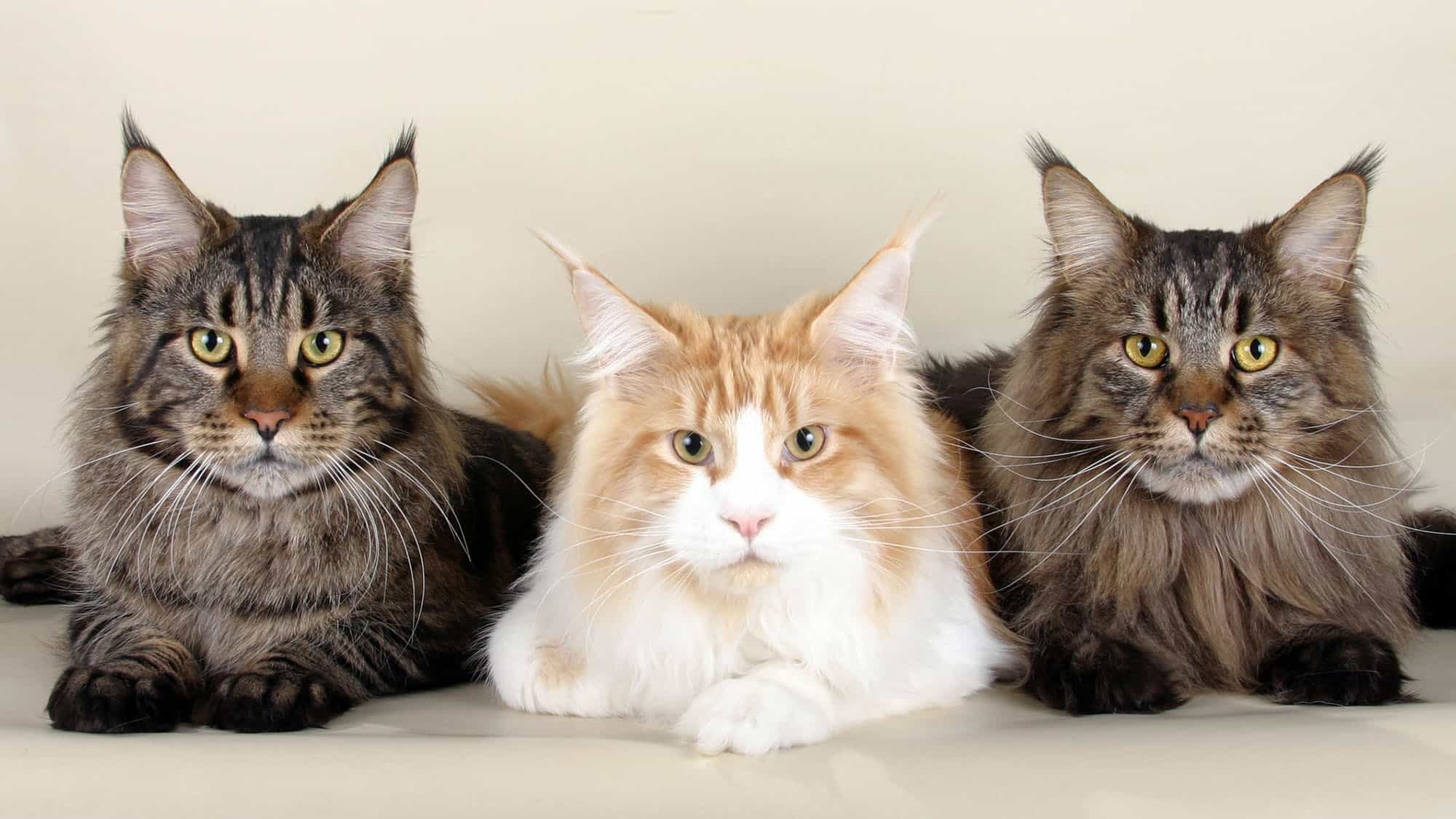 While many cats are quite standoffish with children, Maine Coons love to interact with kids of all ages. They are gentle with adults, but do just as well with teens and toddlers.

The felines not only love to snuggle up with children, but they will also play with them for long periods of time. The cats are quite social. Kids give them someone who also has a lot of energy and excitement.

The breed also does well with both cats and dogs. It can be intimidating to introduce other animals to your Maine Coon’s world, but it won’t take long for everyone to get along under the same roof.

If you’re really worried about such encounters, simply raise the Maine Coon alongside your other pets.

5. The History of the Maine Coon

Maine Coons, as you might imagine, first came from Maine. Though many believe their ancestors crossed to the New World on Viking ships, the modern breed as we know it did not come about until much later on.

From its first inception, the breed quickly gained popularity due to its impressive size. The felines were used as mousers, ship cats, and farm cats as far back as the 19th century.

From that point in time, they steadily began to spread out across the country. Their unique features earned them a reputation as show cats, and they were one of the first breeds registered with the Cat Fanciers’ Association when it formed in 1908.

Though they fell out of favor in the 1910’s, Maine Coons made a large comeback during the 1960’s. At the time, breeding efforts produced a wide amount of different colors, including the Maine Coon Black and the Orange Maine Coon Cat.

6. The Regular Expenses of Owning a Maine Coon

Purebred Maine Coon Cats are large in every aspect, including price. The breed commonly goes for around $1000 when coming from a known breeder.

There are a few Maine Coon Cat Rescue groups that help bring the large animals to loving owners. If you’re looking into Maine Coon adoption, these two groups are a good place to start.