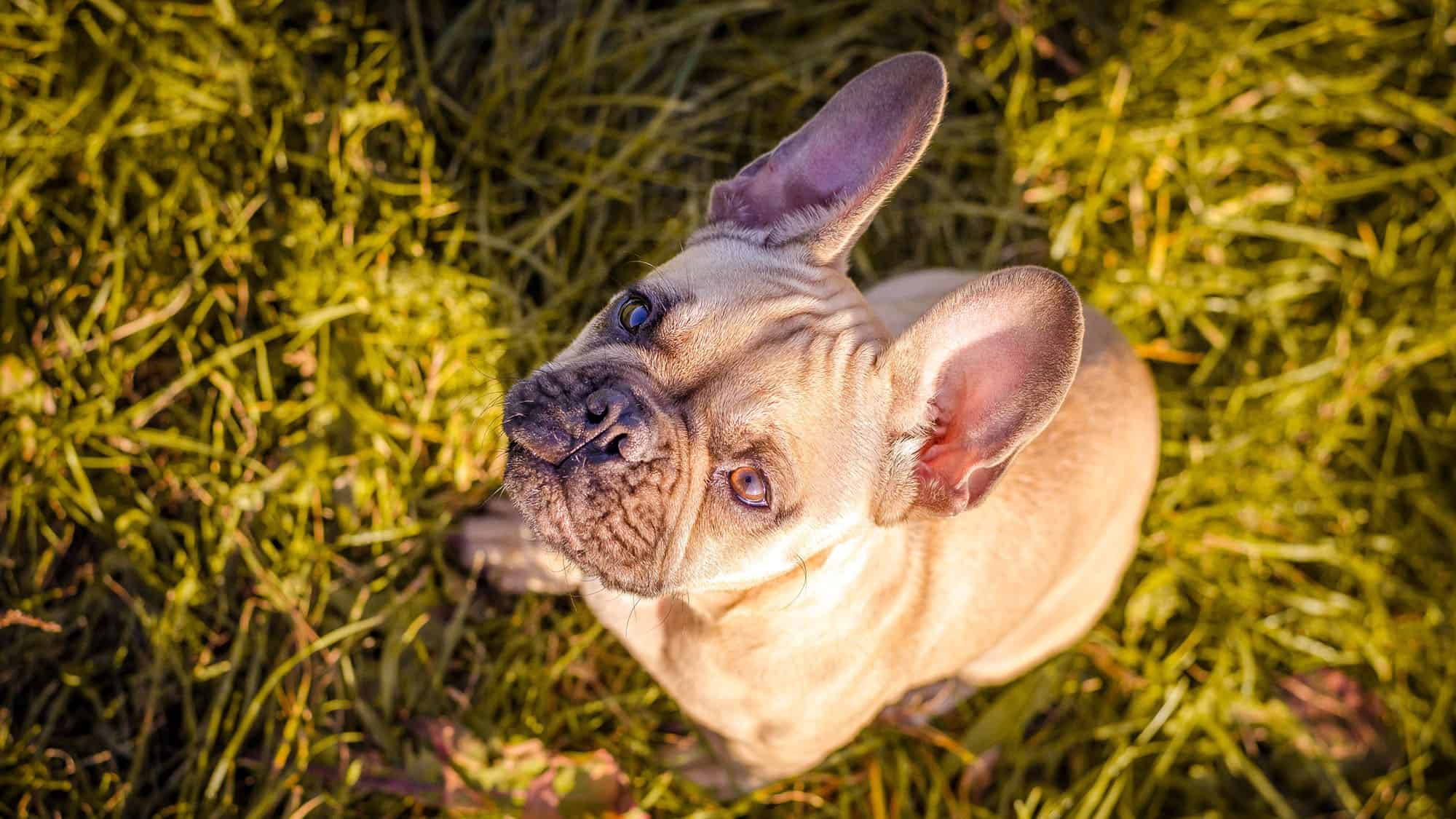 Cousins to their English counterparts, French Bulldogs are loyal, loving canines best known for their cute face, unique ears, and smushed body. Though not quite as hardy as the American Bulldog, the canines make excellent companions.

The adorable dogs have a caring personality. They quickly bond with their owners, enjoy being the center of attention, and get along with people. They are not aggressive, enjoy lounging around, and rarely bark or yip.

While not overly energetic, the dogs love to play games and will run around if given the chance. A French Bulldog adult might be a bit more lethargic than a puppy, but the breed never loses their inherent love of play. 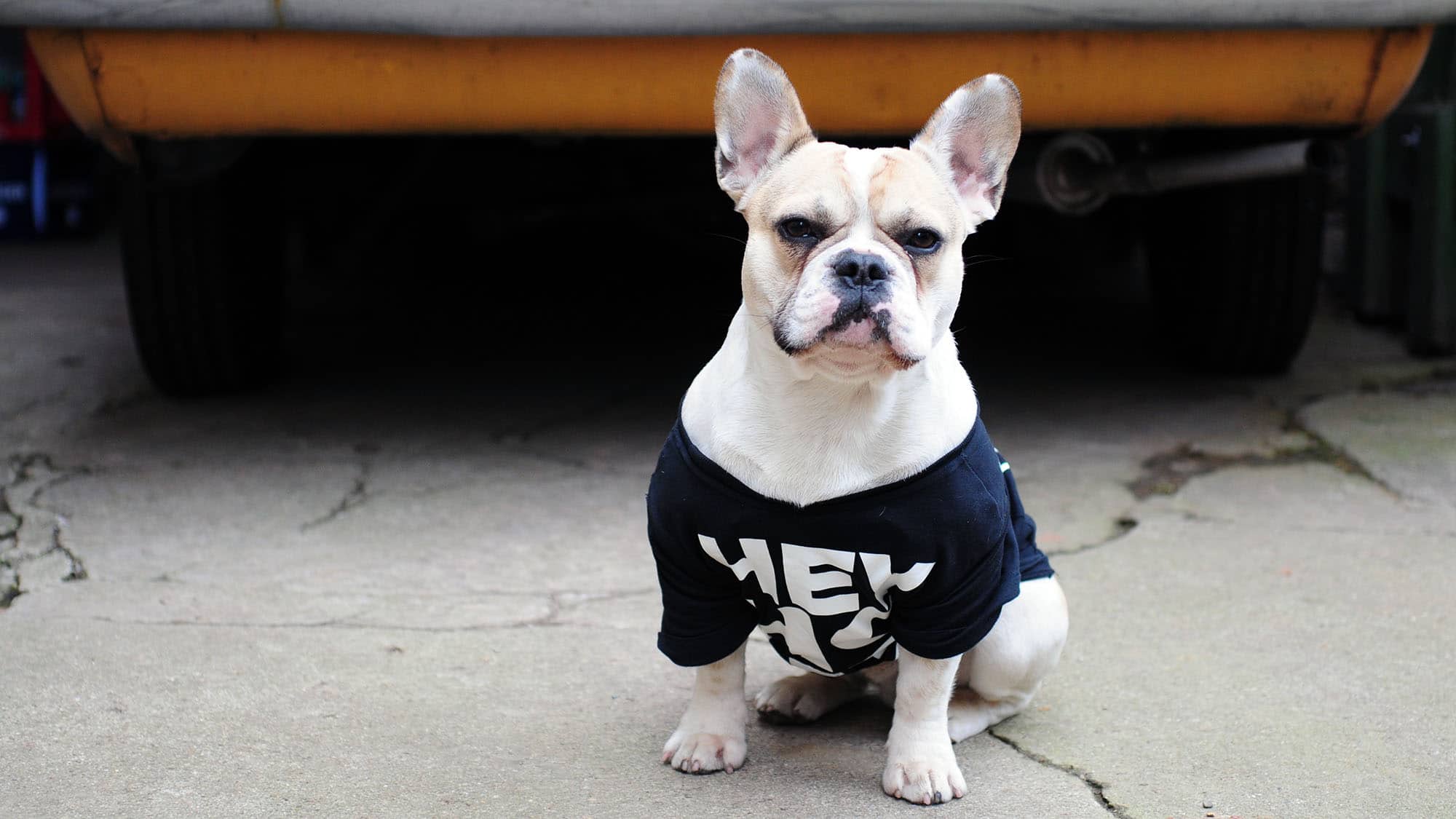 French Bulldogs are some of the most mild-mannered dogs out there. The breed is happy being with their owners and actively seek attention. They are quick to form bonds with humans, a trait that makes them great with large families.

In fact, that bond is so strong the canines can experience separation anxiety if left alone for too long. That can cause them to be quite loud or destructive. It is always important to make sure you pay attention to your bulldog, get them a crate for separation anxiety and keep them engaged every day.

A French Bulldog full grown tends to be more reserved than other toy breeds. However, they are extremely energetic while young and need a good amount of play during their early years.

Many people assume the dogs will spend all their time lounging, but they will be right at the door to greet you when you get home. They also love to cuddle.

However, despite their positive reputation, Frenchies can be stubborn from time to time. Early training is important with the breed, as is proper socialization. Such measures will prevent them from being too aggressive or loud later in life.

2. How to Care for a French Bulldog

Vegetables are great for the breed, as are foods like fish and beef. Always look for brands, such as the ones in this review, that have a little bit of everything. Unbalanced foods can be bad for your dog’s health and negatively affect their coat.

There are many options on the market, and they should all work for your Frenchie. As long as you get high quality ingredients, raw food, canned food, or kibble will be just fine.

Both the regular and long haired French Bulldog require decent grooming. That is important to consider when asking the question “do French Bulldogs shed?” and it is something to keep in mind when bringing the breed into your home.

The dogs have sensitive skin and require a good bath every two to six weeks. When doing so, be sure to use special shampoo that won’t irritate their coat. It is also a good idea to go over their fur with a hair dryer before bathing. That will knock off any dirt on their skin.

Beyond that, trim their nails when they get too long and always go over your Frenchie’s skin folds with a towel to make sure there is no bacteria build up.

As they are small and relaxed, French Bulldogs do not need as much exercise as similar breeds. They are mostly low energy, which means one short walk a day in addition to some inside playtime should be more than enough.

The dogs love games like fetch or tug-of-war. Giving them a bit of that at night can be a good way to tire them out before bed.

Just be aware that the breed does not do well in hot weather. Always try to take them out in the morning or evening to keep them cool while they run around.

French Bulldogs are easy to train as long as you start them when they’re young. They respond well to obedience, crate, and house training with a bit of determination.

Understand the importance of patience when training your Frenchie. Try different methods to discover which one your pup likes the best. If one method doesn’t work, another probably will. 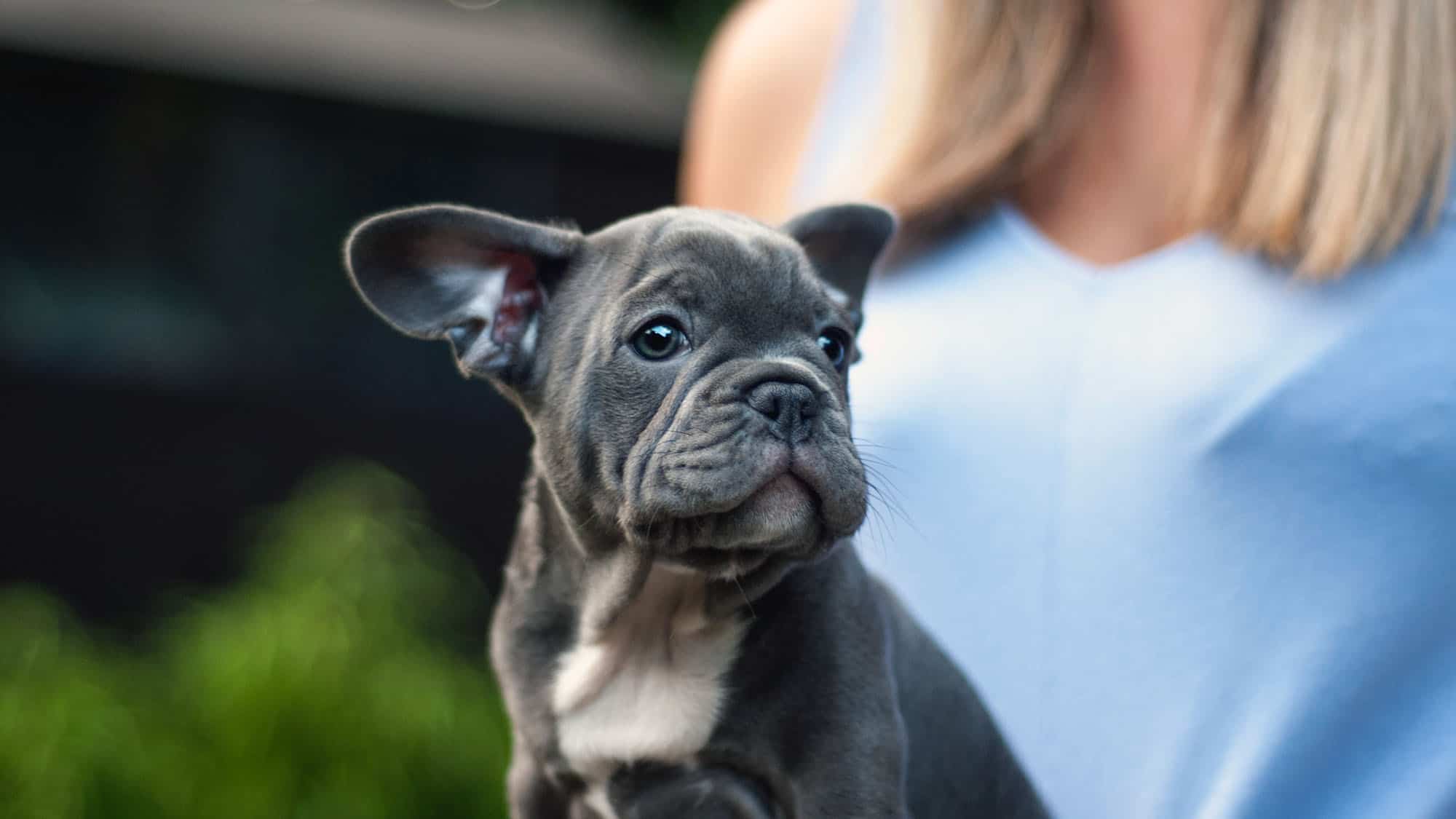 The French Bulldog life expectancy ranges from 10 to 14 years. However, there are many classic French Bulldog traits that lead to long term health issues.

The most common of the French Bulldog health issues, Brachycephalic Syndrome is a disorder common in dogs with squished faces. It occurs when the airways become obstructed, and it can lead to everything from labored breathing to a total collapse of the airway.

Though dangerous if unchecked, Brachycephalic Syndrome is quite easy to detect. Always listen to your dog’s breathing, especially after going on long walks or engaging in serious exercise. If caught early, your vet can handle it with treatments like oxygen therapy or targeted surgery.

French Bulldogs tend to have short, smushed bodies. While cute, that also makes them susceptible to Intervertebral Disc Disease (IVDD). Dogs with the condition have herniated disks that push out of the spinal cord and limit nerve transmissions. Such issues then lead to pain, weakness, or paralysis.

There are many issues that cause this condition, ranging from trauma, old age, or long jumps off the furniture or stairs.

If you see your pup in a lot of pain, it is best to take them to the vet. While IVDD can be serious, prompt treatment goes a long way. That includes special anti-inflammatory drugs, physical rehab, and surgery.

Von Willebrand Disease is one of the biggest threats to the French Bulldog lifespan. The condition is a disorder where the von Willebrand factor drops in the blood. That then causes bleeding in various places.

Frenchies with this disorder can bleed from the nose, gums, during heat cycles, or after surgery. Blood may be found in the stool as well.

Diagnosis of von Willebrand disease usually occurs between the ages of 3 and 5. Though it cannot be cured, your dog can still live a long, if not careful, life. 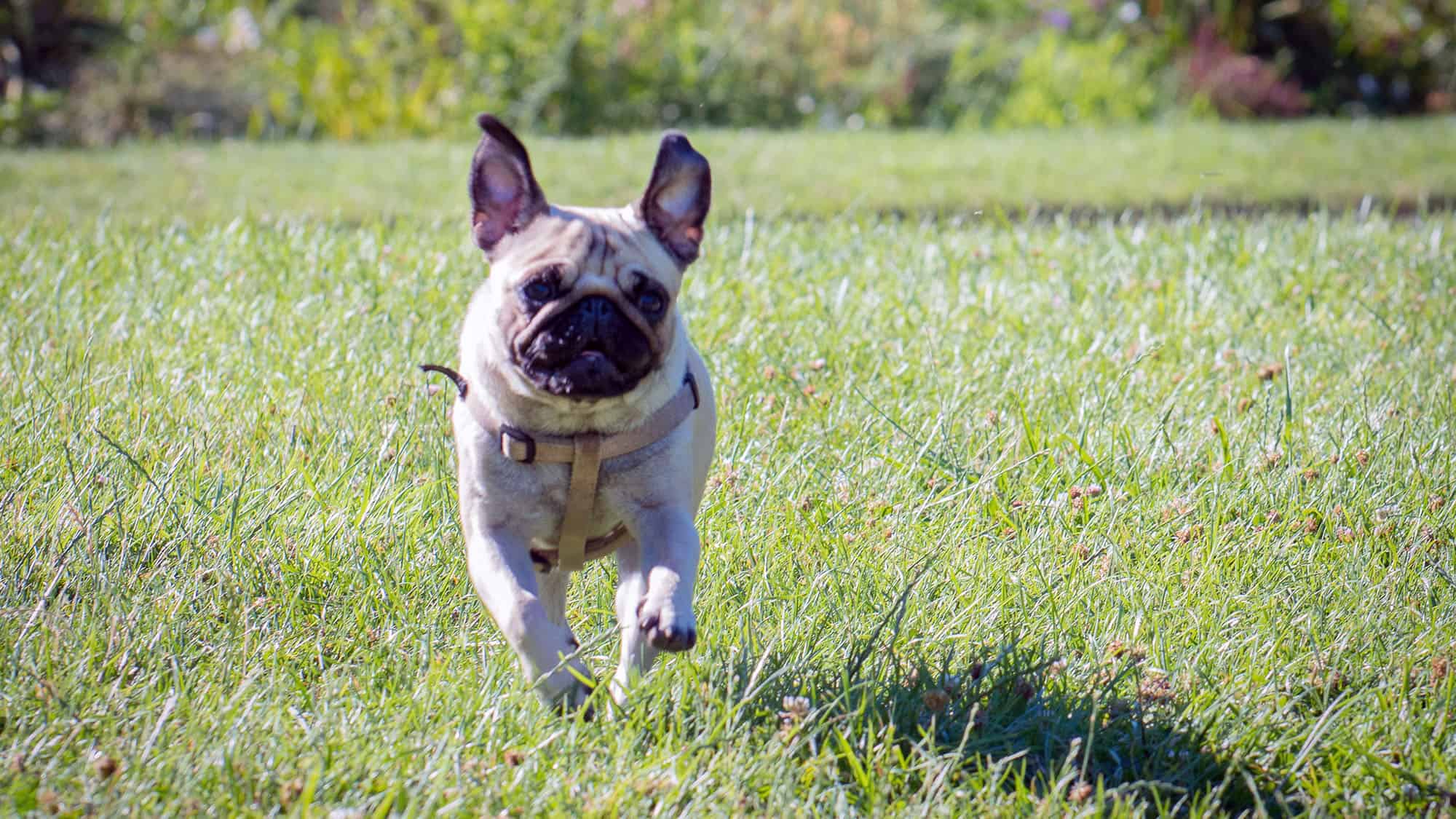 Though you should always monitor interactions between your dog and children, French Bulldogs are excellent with kids. The canines tend to be laid back, which makes them very unlikely to bite or nip, and they love to play. Children can have a lot of fun running or cuddling with the breed.

Frenchies also do well with other dogs and cats as long as they are properly socialized with them while growing up. Though they do need their space, the breed greatly enjoys having an extra friend around the house.

Just be aware that Frenchies may be aggressive towards animals they meet later in life. They are quite jealous, which means they do not like their owners showing a lot of attention to animals they don’t know.

5. The History of the French Bulldog

Despite their name, French Bulldogs first began in England. That is because the breed came from the more traditional bulldog, which originated on the island.

The stocky dogs were used for blood sports like bull-baiting. However, once such activities became illegal, breeders mixed the canines with terriers to get smaller toy bulldogs.

Those smaller breeds eventually found their way to France, where they became incredibly popular with the poor and rich alike. So much so that English breeders began to send all dogs they deemed too small to France.

The Frenchies’ unique look then caught the attention of Americans traveling abroad. Though the breed’s popularity rapidly dropped around World War One, they made a large comeback during the 1950’s thanks to their different color patterns.

Frenchies then officially took off in the states when the French Bulldog Club of America was formed during the late 1980’s.

You can get a more in-depth explanation of the breed’s history here.

6. The Regular Expenses of Owning a French Bulldog

A Frenchie puppy tends to be more expensive than similar breeds. You can expect to pay around $1500 to $3000 when getting one from a good breeder.

French Bulldogs, though cute and lovable, still need homes. To help with that cause, there are a few key organizations that work hard to get them into warm households.