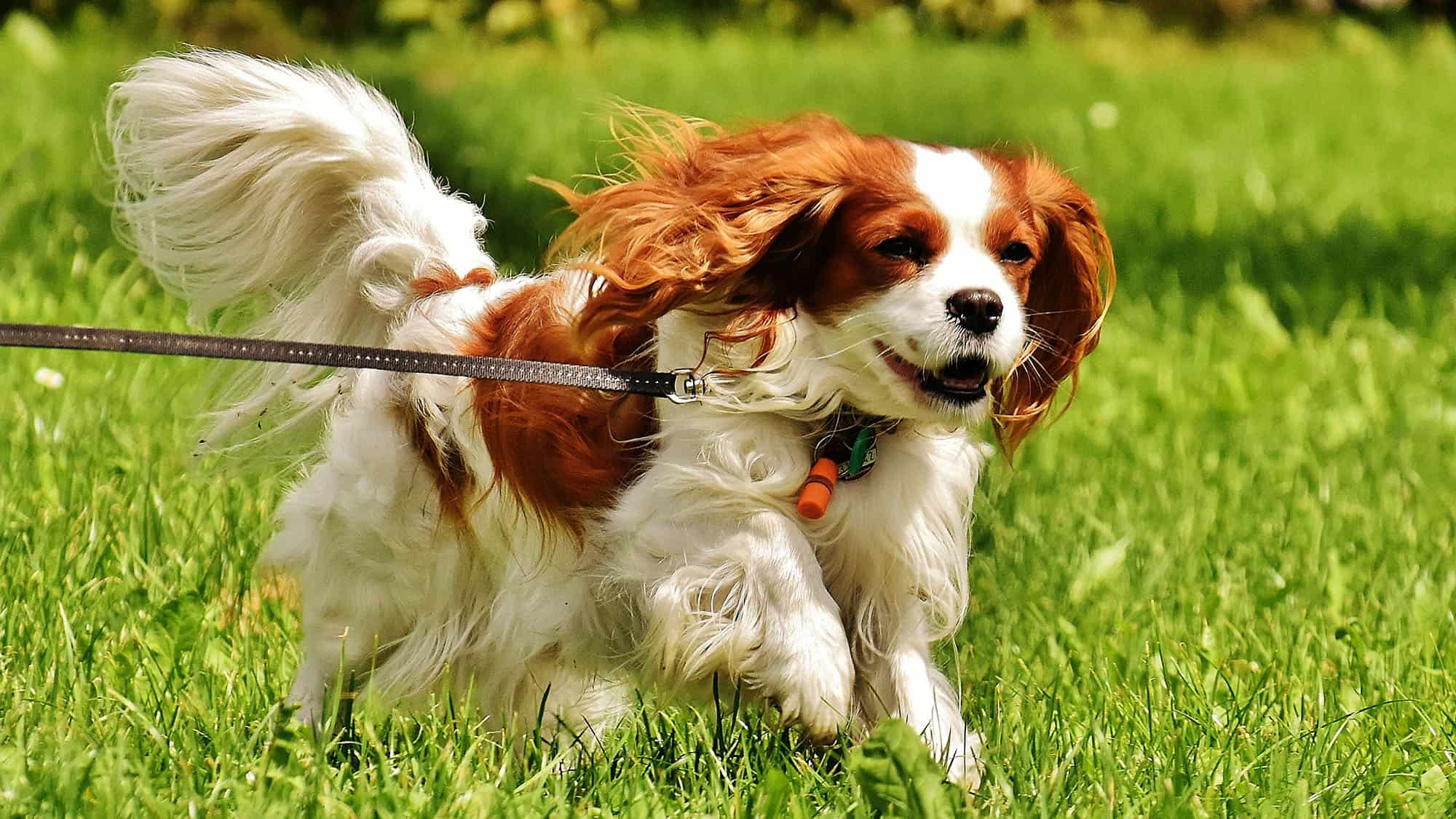 The dogs are an extremely popular toy breed due to their love of both relaxation and play. Though they can be hyper like other small dogs, they also enjoy lounging around the house whenever possible.

To go with that is the breed’s friendly nature. They are quite subdued in terms of aggression and tend to get along with both pets and children. That makes them a fantastic family dog that’s well suited for all homes.

Another bonus of Cavalier King Charles Spaniels is that they can be trained with positive reinforcement. As long as you start training when they are young, they will have no problem sharing their space with others.

Though the dogs can be prone to a few more serious diseases, regular health checkups on top of proper feeding and grooming practices should keep them in tip-top shape. 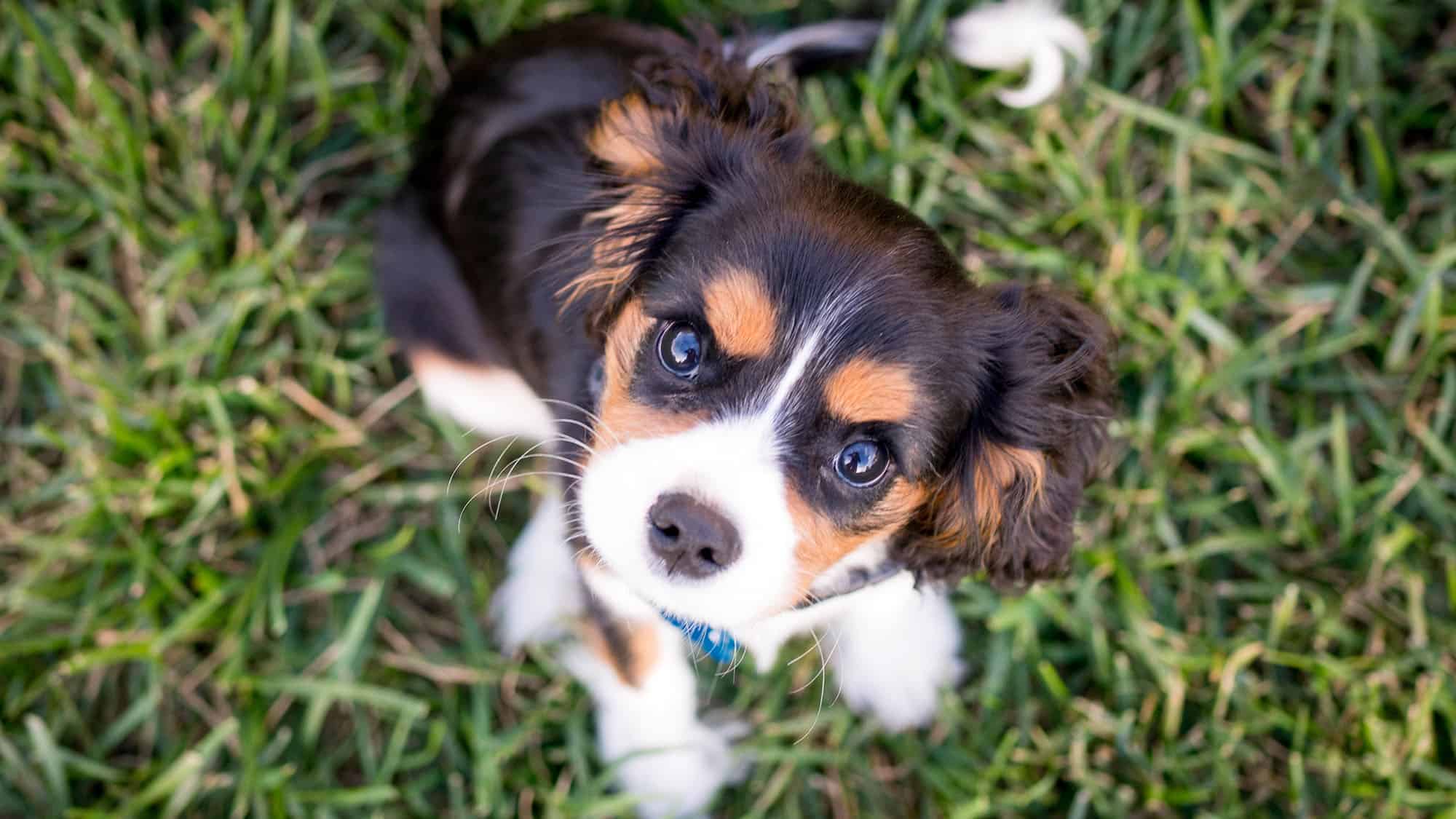 Cavalier King Charles Spaniels are quite energetic. The breed, in line with other toy dogs, loves to play, and does extremely well in an outdoor-friendly household where they have room to run.

They also love being outside. Though many people do not like taking smaller pets out into the world, King Charles Spaniels thoroughly enjoy every environment from the woods to the beach.

That being said, the canines also enjoy relaxation much more than similar small breeds. Owners of Cavalier King Charles Spaniels will often find their pups curled up on the couch or asleep in their favorite spot.

They also love to cuddle with humans, a sign of their inherent companionship. While many small dogs like to dart about the house, King Charles Spaniels will follow you around as much as they can.

It is important to foster that bond, which is why investing in items like separation anxiety crates goes a long way with the breed.

2. How to Care for a Cavalier King Charles Spaniel

King Charles Spaniels do not need a lot of food in order to keep a healthy weight. Typically, it is best to serve them one cup of food twice a day.

The breed enjoys many different meals, so be sure to understand the foods they can eat. A mix of meat and veggies goes a long way here, as it keeps them lean. Cavalier King Charles Spaniels are predisposed to obesity and that can lead to other health problems.

A balanced diet, which you can achieve with the best dog food for small dogs, is important to making sure your pup stays healthy.

The dog’s lush coats need to be brushed once a day in order to ensure the oils in their fur do not build up. A medium bristle brush should be enough for this task.

Just make sure to focus on the longer parts of the coat that tend to become tangled. That includes the ears, legs, and tail. If you’re having issues, check out this article on the best dog clippers for thick coats to see what might work better for your dog.

Though spaniels have a lot of furs, King Charles does not need to be bathed more than once a month. The dogs have a lot of natural oils under their coat. Giving them excess baths breaks down those oils and can dry out the skin.

Once your pup comes out of the bath, simply pat them down with a towel or top-of-the-line dog dryer. Be careful not to rub or scrub them too hard, as that can lead to tangles down the line.

King Charles Spaniels are small, but they are also full of energy. A medium to long walk, roughly between twenty and forty minutes, once a day is recommended for the breed.

It is also a good idea to get them into a larger area every now and then. Dog parks and hiking trails give your canine plenty of room to run.

If you cannot get out as often as you’d like, or if you only have a limited amount of time, the spaniels also love to play at home. Fetch and other similar games keep them engaged for extended periods of time.

Cavalier King Charles Spaniels tend to be relaxed, but they do benefit from early training and socialization. Obedience and toilet training should both start as soon as you bring your dog home.

The breed is quite intelligent and can be taught everything from traditional tricks to competition courses.

They also respond well to reward-based training programs. Simple treats or positive reinforcement go a long way toward helping them learn. Negative attention, such as yelling or reprimanding, will not get you results. 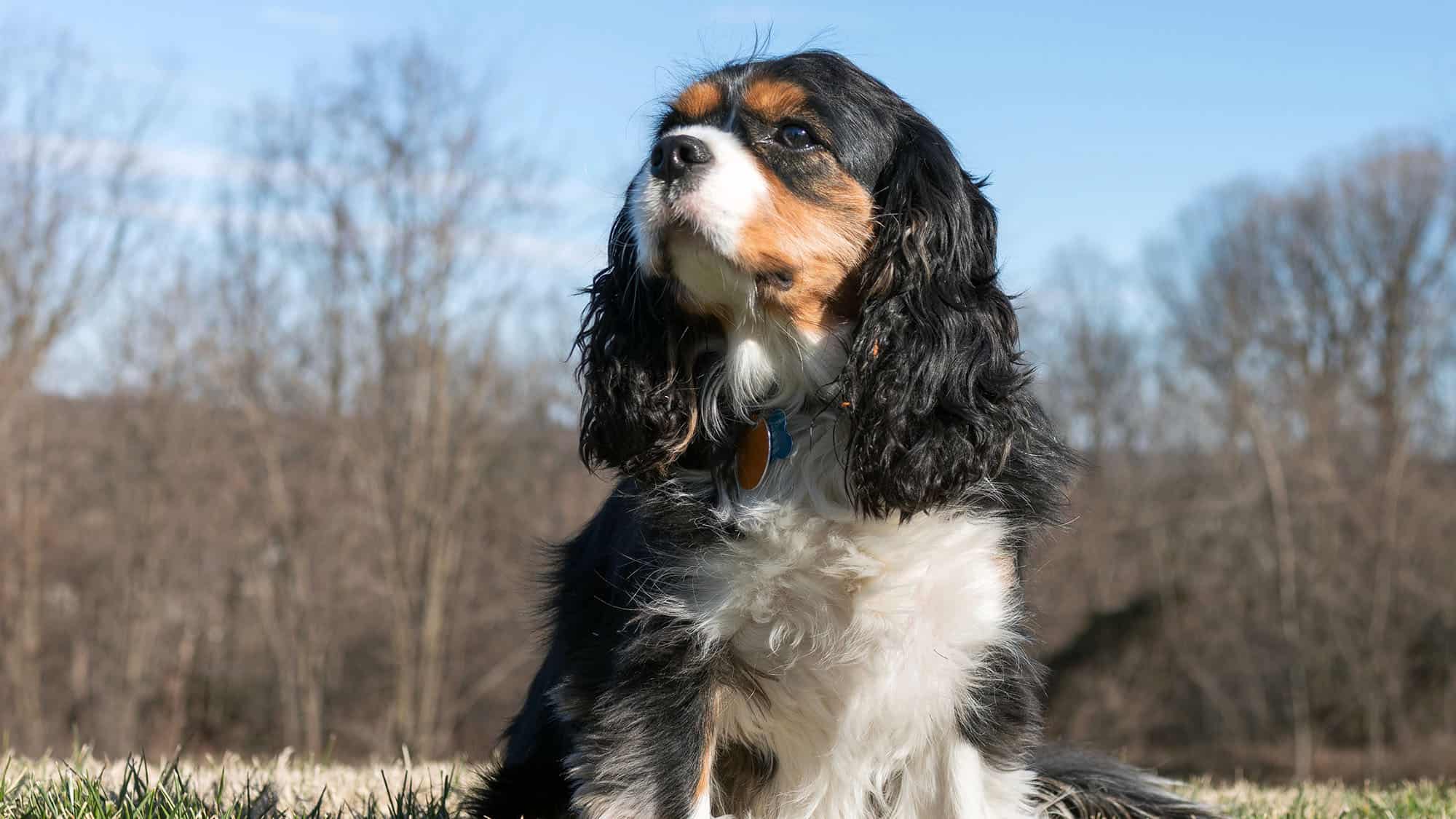 Like many dogs, Charles Spaniels can develop hip dysplasia as they age. The abnormal formation of the hip socket slows them down and will make it hard for them to move.

As dysplasia commonly affects larger breeds, it may not be present in your spaniel until they get much older. However, be aware of the issue as your dog grows and always pay attention to how they move around.

Entropion is one of the most common Cavalier King Charles Spaniel health problems. It comes about when the inner eyelid’s edges rolls inward and irritates the eye. That then leads to redness, light sensitivity, inflammation, and discharge.

The issue, which typically develops within the first few months of a spaniel’s life, can lead to permanent damage and blindness. As such, it is one of the most important health issues to watch out for in Cavalier King Charles Spaniel puppies.

Syringomyelia is another common issue in King Charles Spaniels. This issue occurs when the occipital bone at the back of the skull prevents brain fluid from moving as well as it should. That then drops it down into the spinal cord and creates a small cavity.

Dogs with this problem typically have sensitivity around their head and neck area. They may also hold their head up during sleeping or eating. If you see any such symptoms, take your pup in for an MRI. 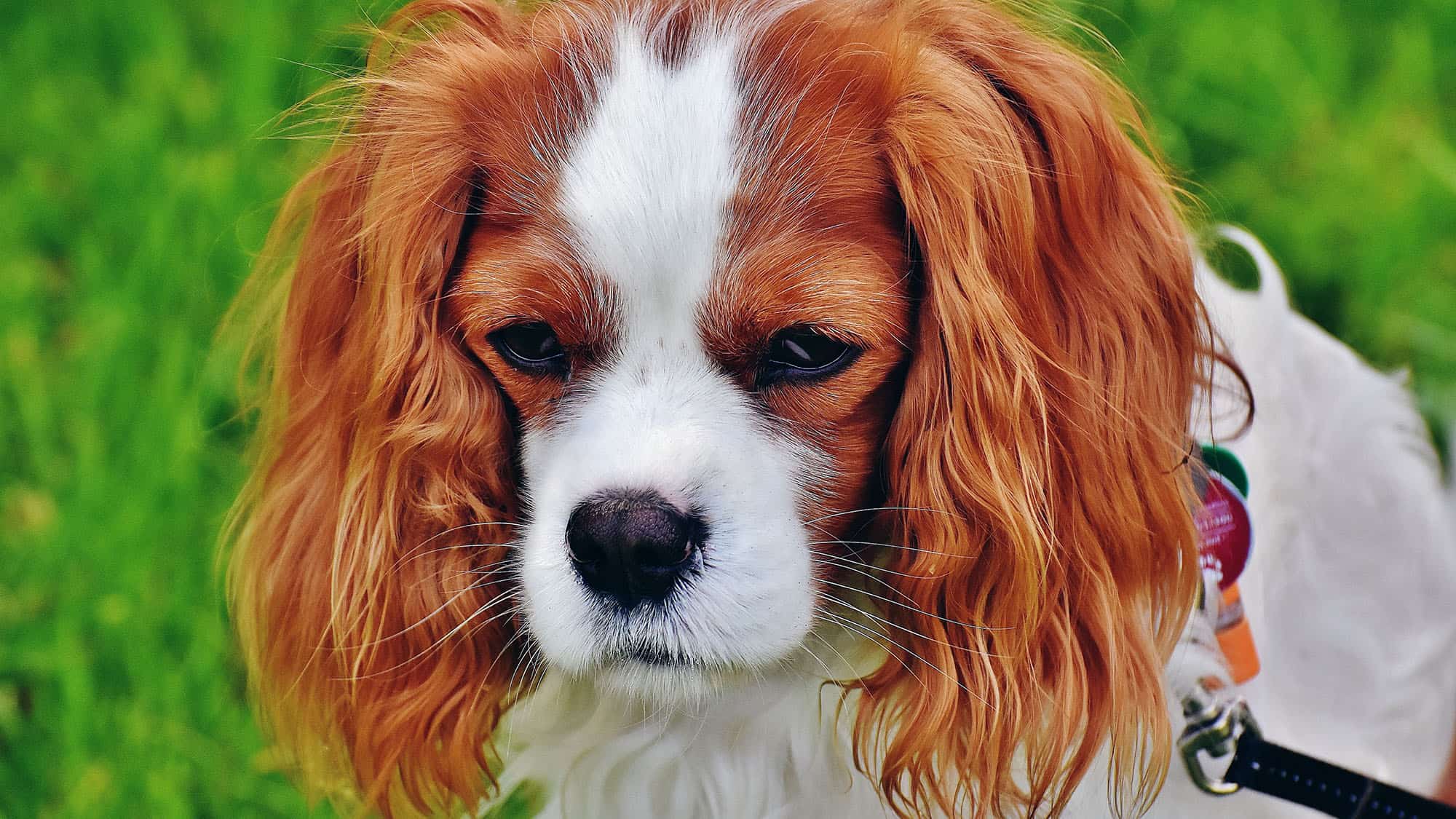 King Charles Spaniels are incredibly friendly dogs that, if properly socialized as puppies, will get along with just about anyone you have in the house.

Though most small dog breeds don’t get along well with kids, the King Charles Spaniels’ gentle nature makes them great companions for both toddlers and older children. Just be careful about toddlers being too rough with the dogs.

King Charles Spaniels also tend to well with all other dog breeds. They can also get along with cats, but only if introduced to the felines at a young age.

The breed may also chase smaller pets, including rodents and birds, due to their strong hunting instincts.

5. The History of the Cavalier King Charles Spaniel

King Charles Spaniels, named after King Charles II, trace their ancestry back to 16th. First known as the “comforter Spaniel,” the breed was a favorite of noble and aristocratic families throughout Europe.

Selective breeding throughout the early 20th century nearly brought the breed back to its original form. However, World War Two wiped out most of the population, and led to the dogs that all current cavalier spaniels come from.

In fact, the American Kennel Club only recognized the breed in 1945 after the fighting ended.

6. The Regular Expenses of Owning a Cavalier King Charles Spaniel

Cavalier King Charles Spaniel breeders typically charge between $1,500 and $3,000 for the sought-after breed. However, some can go above or below depending on the area and reputation.

There are many Cavalier King Charles Cavalier rescue organizations that aim to match up the loving dogs with caring homes.