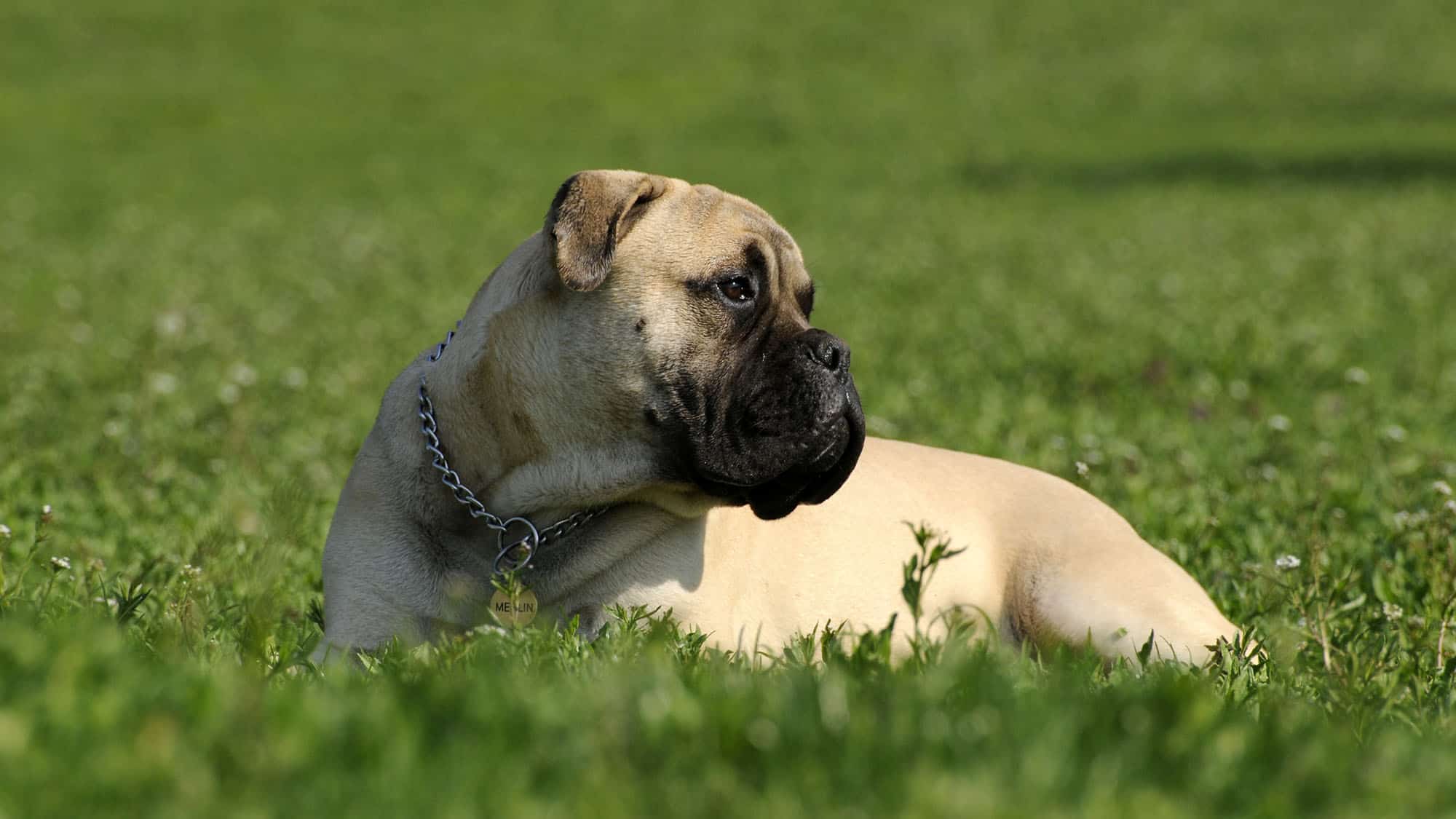 Bullmastiffs are large, friendly dogs characterized by their stocky build and short muzzle. They are also found in several striking colors, including the black bull mastiff and red bullmastiff. Bullmastiff brindle is also quite pleasant to look at.

The dogs are nothing if not loyal. First bred as a guardian dog, the breed is known for its intense protective instincts and love of their family. They love human companionship and are most comfortable in their owner’s presence.

As they are one of the watch dog breeds, they are generally suspicious of strangers. Even so, proper training of bullmastiff puppies can help make them much more comfortable with the outside world.

Strong and stocky, the breed also loves to run. They enjoy sprinting through wide open spaces, but delight in going out for simple walks as well. They do not mind lounging, but be sure to invest in an indestructible dog bed you won’t have to constantly replace.

That mix makes them a perfect fit for families who want a strong home dog that they can also take outside or on weekend camping trips. 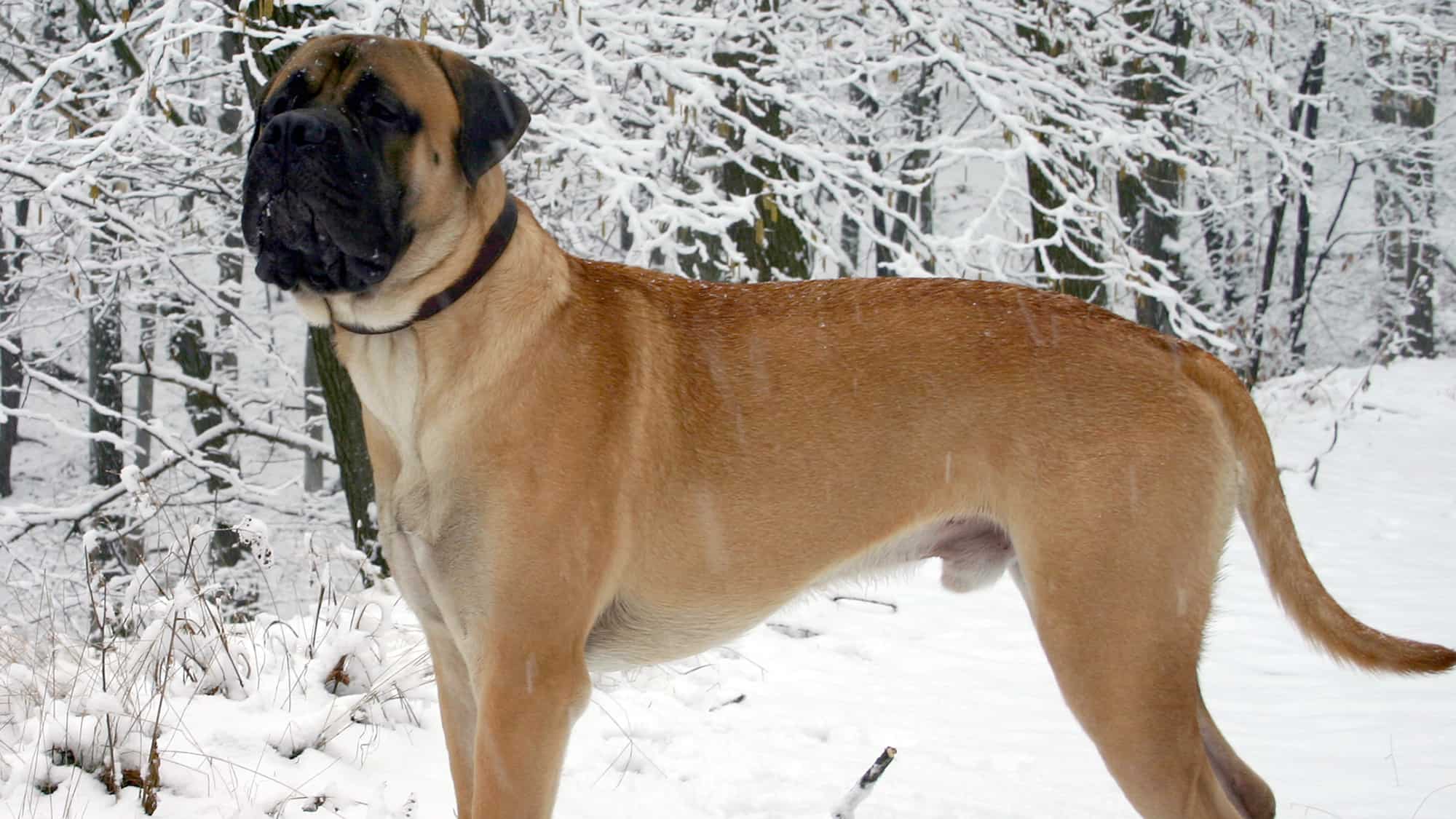 Despite their tough appearance, Bullmastiffs are kind, gentle dogs that get along extremely well with their owners and families. That trait makes them great watchdogs, even if they can be a bit headstrong at times.

The dogs simply love being around people they know. Though they do not favor the companionship of other animals, they actively seek out and need human attention.

For that reason, it is important to always spend quality time playing or interacting with your pup.

Intensely loyal, the breed can be a bit aggressive towards people they do not know. However, they can be trained to get along with anyone their owners trust. They also play well with humans they’re introduced to early in life.

To get over that headstrong demeanor, take your bullmastiff puppy on walks or trips to give them the early exposure they need to be much more trusting.

2. How to Care for a Bullmastiff

You may ask “how big do bullmastiffs get?” and the answer is, quite big. Like most larger dogs, they need a good amount of energy to make it through the day. The best large breed puppy food options will help with that by providing them a blend of essential nutrients they need to grow to full size.

Just be sure that meat is the main focus of your dog’s diet. The best dog foods stand on their own, but mix-ins like such as fish, beef, and egg yolks, on top of healthy kibble also works.

When feeding your dog be sure to give them a few smaller meals throughout the day rather than one large one. Slowing down their food intake will help prevent bloating, which can cause serious health issues if unchecked.

Bullmastiffs have a short, easy-to-maintain coat that only needs to be washed about once every six to eight weeks. If your dog runs around a lot, you want to wash closer to six. If they are more low-key, you can get away with waiting a bit longer.

The breed’s coat is short, but it is also dense. For that reason, you need to wash it to keep its healthy sheen. That will limit shedding as well.

Beyond bathing, it is also important to clip your mastiff’s nails, as well as run a cotton pad through the folds on their skin. Such practices limit dirt build up and significantly lower any long-term skin irritation your dog might feel.

Bullmastiffs are large, strong dogs. Like similar stocky breeds, they want to use their muscles by sprinting or going on long walks. Daily treks around your home or neighborhood will be enough to keep them stimulated.

However, as mastiffs are so strong, it is important to engage them in leash or crate training. You don’t want to get pulled off of your feet because they took off after another dog, human, or small animal. Investing in a heavy duty dog crate to make sure that you can control your bullmastiff when going outside. Our article about the best heavy duty dog crate might give you some options.

The dogs are also headstrong animals that, if not properly trained, can become quite unruly. For that reason, you want to always research how to train your bullmastiff before figuring out how to teach them.

Not only is obedience training important, but so is getting your bullmastiff puppy exposed to the outside world. The more places they go and people they interact with, the better they will be with strangers as they get older.

Unlike other breeds, bullmastiffs respond to both rewards and punishments. A light scolding can go a long way when they do something wrong. As can a tasty treat when they listen to your commands. 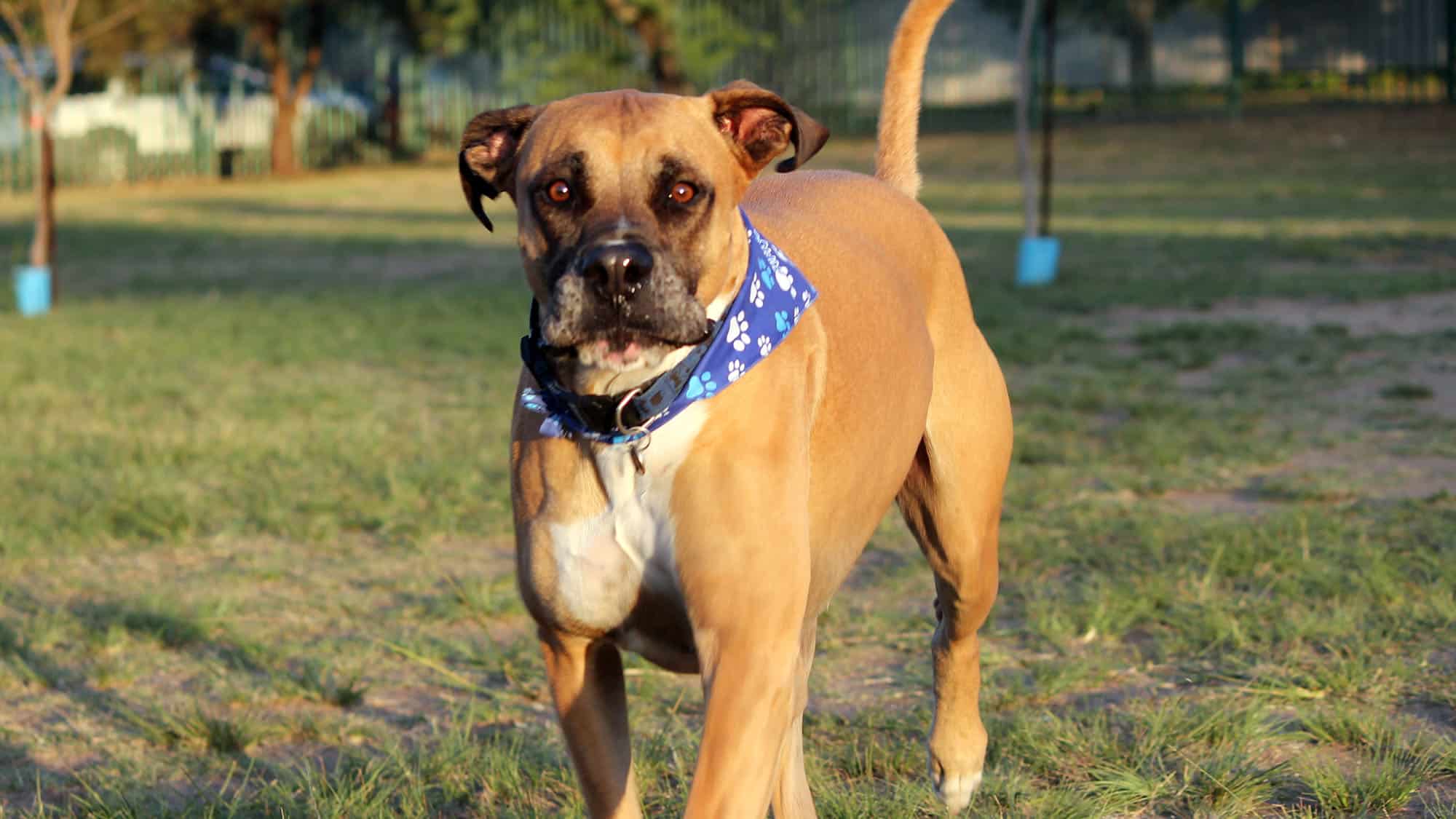 The bullmastiff lifespan is 8 to 10 years. They are strong dogs, but that does not mean they have perfect health. The breed tends to avoid most serious issues, but there are a few general health problems that are important to note.

Gastric Dilation, also known as GDV or bloat, is a stomach issue that can be fatal if left unchecked. It can occur when your dog eats one large meal or takes in a large amount of water right after eating.

The condition is marked by lethargy, restlessness, rapid pacing, and the inability to vomit or use the bathroom. If your bullmastiff shows any of these symptoms it is important to take them to the vet and have them looked at.

As this breed has so much strength packed into their sturdy frame, they are extremely prone to ligament tears. Certain ones, such as an anterior cruciate tear, can cause general pain, while more serious injuries can prevent the dog from putting any weight on their leg.

If your dog experiences an injury where they have clear leg pain, it is important to take them in right away.

Unfortunately, cancer is quite common within the breed as well. The disease manifests in a multitude of different ways, and it is one of the main reasons for the lower mastiff life expectancy.

Lymphoma, bone cancer, and hemangiosarcoma each affect the breed, and you have to be vigilant to catch them. Though sometimes you will notice and lump or mass, many cancers show no outward symptoms and can only be detected through check-ups. 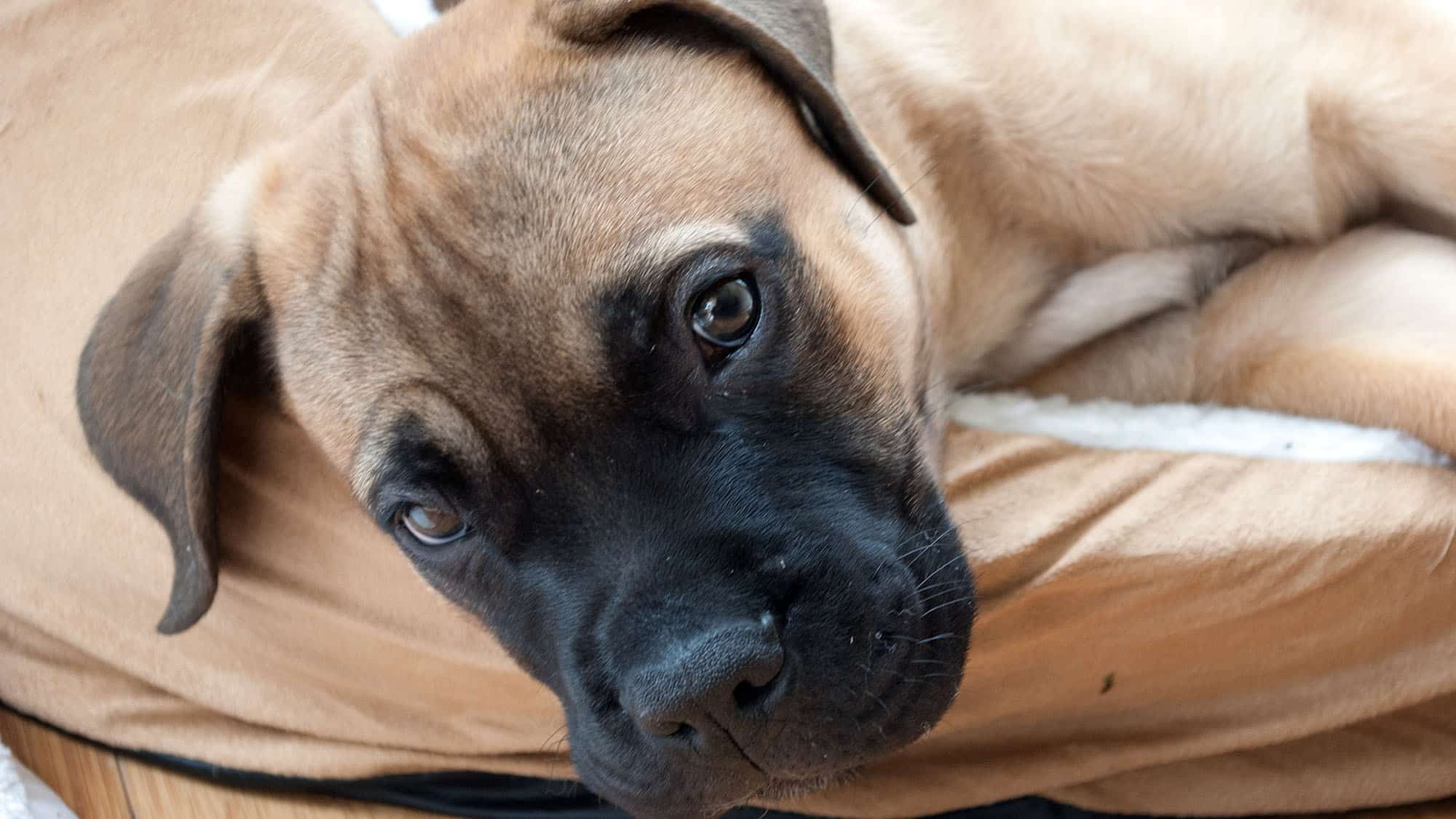 As protectors of the home, bullmastiffs are great with children. They will quickly bond with a family, and do everything they can to keep kids safe.

However, be aware that their protectiveness can get out of hand if your children like to play wrestle or undergo other similar activities. Do not leave your pup unsupervised around kids they do not know, and understand how to properly introduce bullmastiffs to your family.

Mastiffs are tolerant of other dogs, but they do not actively enjoy their company as much as similar large breeds. Though they can do well if they are raised alongside another puppy, for the most part they are too territorial to share a space.

They do get along with most other pets, especially if that pet is an animal they’ve known since they were first born.

5. The History of the Bullmastiff

The mastiffs first came about in the United Kingdom during the 1800’s where they were bred as a way to keep poachers out of game estates.

To get the mix, breeders mated a bulldog and an Old English mastiff. That combination gave the dogs important traits other breeds lacked. They were big enough to hold down a human, but were not so large that they would seriously injure them.

From there, the canines spread out to many places across the world. There is now the French Bullmastiff, American Bullmastiff, and English bull mastiff.

Those different breeds have been used as guard dogs in a range of countries. So much so that many consider them to be the best dog for protection purposes. It is that trait that makes them such cherished animals to this day.

6. The Regular Expenses of Owning a Bullmastiff

Bullmastiff breeders commonly charge between $1000 and $2000 for a puppy depending on their experience and reputation. However, if you shop around you can find one for a few hundred dollars below that range.

Bullmastiffs are loyal, gentle creatures, but that is not always how they are perceived. To help bridge that gap, a few organizations work hard to find the breed warm, loving homes.