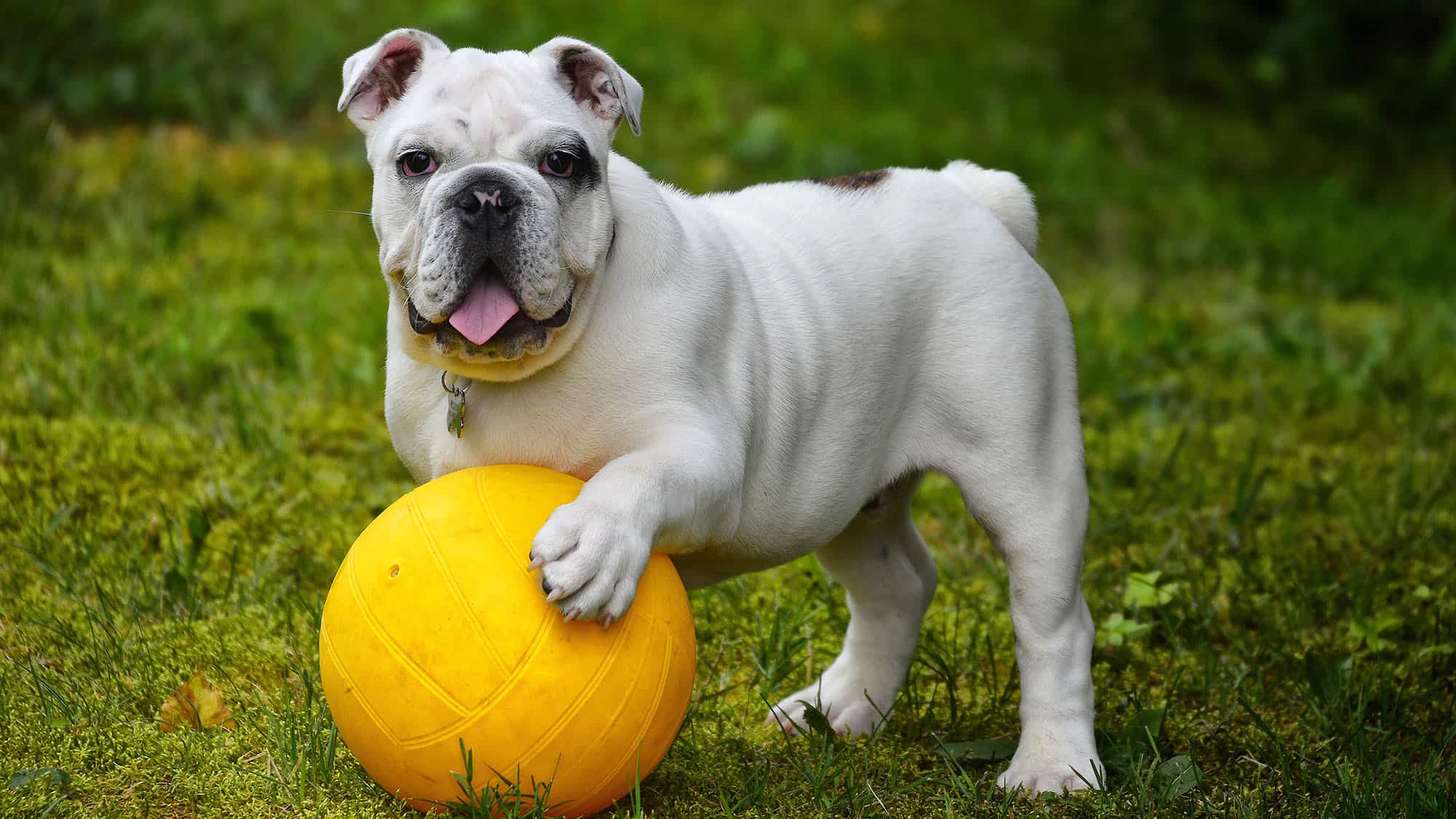 Bulldogs are one of the most common dog breeds on Earth. The tough, wrinkled animals are known for their playful nature, gentle personality, and relaxed demeanor. Those three traits combine to make a lapdog perfect for all different homes.

The breed is a caring family pet that does well with other pets as well as children. They rarely bark, and spend most of their time lounging around the house. That makes them a great pet for more laid-back owners.

The canines come in many colors. The Brindle Bulldog is extremely common, but you will often see tri colored English Bulldogs as well.

Bulldogs are loving animals that quickly take to their owners. The dogs are naturally friendly and enjoy cuddling or napping whenever they get the chance.

The canines are extremely relaxed compared to most other dogs. It takes quite a bit to rile them up, and even then, they aren’t the fastest animals around. Though they can be aggressive due to their fighting history, they are generally kind hearted.

The mild-mannered dogs spend most of their time lounging around or sleeping. That makes them a great option for owners who want a dog that isn’t going to be too hyper or too much to care for. In fact, they lay around so much that it is often your job to get them up and moving.

The aforementioned traits make bulldogs one of the most dependable breeds around. They have a sweet, gentle personality and are extremely friendly.

Though the general temperament can vary from dog to dog, it is rare to find a bulldog with a lot of energy or one that turns down a good nap.

2. How to Care for a Bulldog

When feeding your bulldog, it is important to lead with protein. The bulldog lifespan is much shorter than other breeds. A healthy, protein-filled diet of vegetables and low fat dog foods like the ones in this article can help mitigate such issues.

Stay away from grain. Corn, soy, and wheat are all harmful to bulldogs. Rather, the best dog food for bulldogs typically comes with quality ingredients they can easily ingest.

It is best to feed your bulldog either one large or two smaller meals per day. The way you feed your dog is up to personal preference, as well as how much exercise they get. You can always cut back if they put on some extra pounds.

Grooming bulldogs is a simple-but-important process in terms of keeping them as happy and healthy as possible. It is first important to brush them each day with a soft-bristled brush.

Though their short coat often leads people to ask “Do English Bulldogs shed?”, it still needs to be properly maintained in order to keep off dead hair.

Regularly clipping your dog’s nails and brushing their teeth go a long way as well. Both of those practices will stave off dental and bone diseases. Just be sure to only use special dog toothpaste. If you can’t afford it, feed your bulldog crunchy treats instead.

Bathing is also essential. Warm water and soap go a long way with the breed. Wash them roughly once a month, depending on how they look and smell, and be sure to clean between their folds to prevent the buildup of bacteria.

Though bulldogs like to lounge, they also enjoy getting outside. They are not the most active dogs, but a quick 20 to 40 minute walk each day will be enough to keep them satisfied.

Just be sure to never overwalk your pup, especially when they are young. Too much exertion can overwork them and lead to problems down the line. You just want to get their heart pumping.

The breed also greatly enjoys games like fetch. However, they do not like to run around as much as other dogs. If you want to play with your bulldog, it is best to do it in a small space or a short amount of time. You may want to throw the ball as far as you can, but they won’t like running that far.

Bulldogs are loving creatures, but that does not mean they’re easy to train. The breed can be quite stubborn if not treated properly.

To overcome that, it is best to start training your dog when you first bring them home. The breed responds well to reward-based training, but ignoring bad behavior is important as well. That regiment, when combined with early socialization with friends and family, will create a happy-go-lucky pup in no time at all. 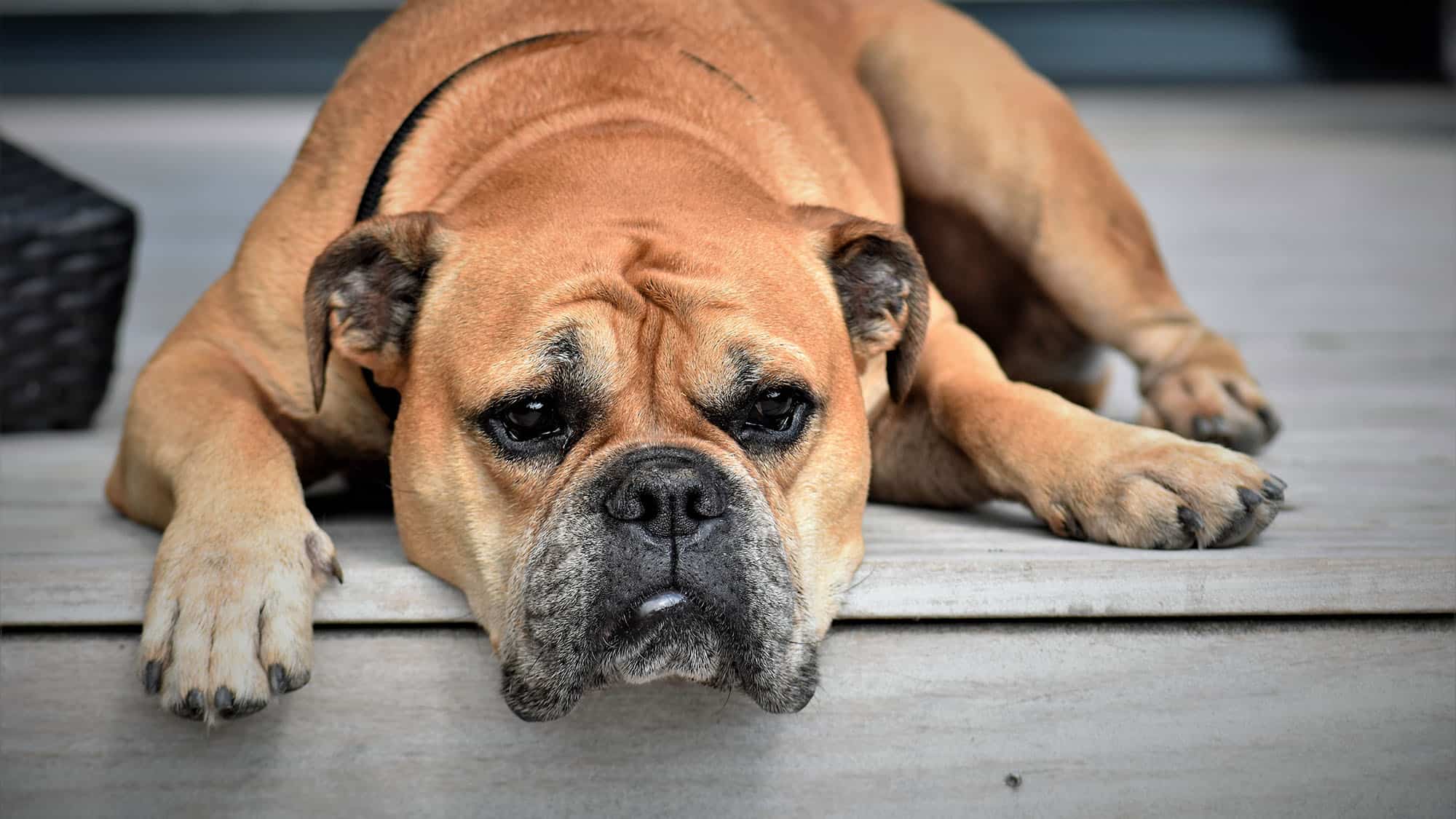 3. Common Health Issues of the Bulldog

The English Bulldog’s life expectancy is much shorter than other breeds. That is due to several health issues that come from years of specialized breeding practices.

Even so, you can always give your pet a good extended life by being able to recognize and combat their different issues.

The bulldog’s smushed face is adorable, but it also comes with several problems. One of the biggest is respiratory issues, which affects French Bulldogs as well.

In some rare cases, this condition can put a strain on the heart. It also tends to get worse during the warmer months of the year. Always monitor your dog and keep an eye on how easily they breathe.

The folds in the bulldog’s skin can cause a condition known as “skin fold dermatitis.” Here, the skin folds trap in moisture, which leads to rubbing and eventual inflammation.

While this issue is incredibly uncomfortable for your pup, it can be properly mitigated with daily cleanings. A quick wipe down of the skin folds should be enough to prevent your bulldog from suffering.

These dogs do not do well in hot weather. The breed’s body is built in such a way where they often overheat and can easily succumb to heat stroke. When the weather warms up, it is essential to keep your dog cool. A nice, air-conditioned room often does the trick, as does letting them lounge in the shade.

If neither of those are viable options, you can let them lie down in a cold, shallow pool or give them an ice bath. Anything to keep their internal temperature at a comfortable level. 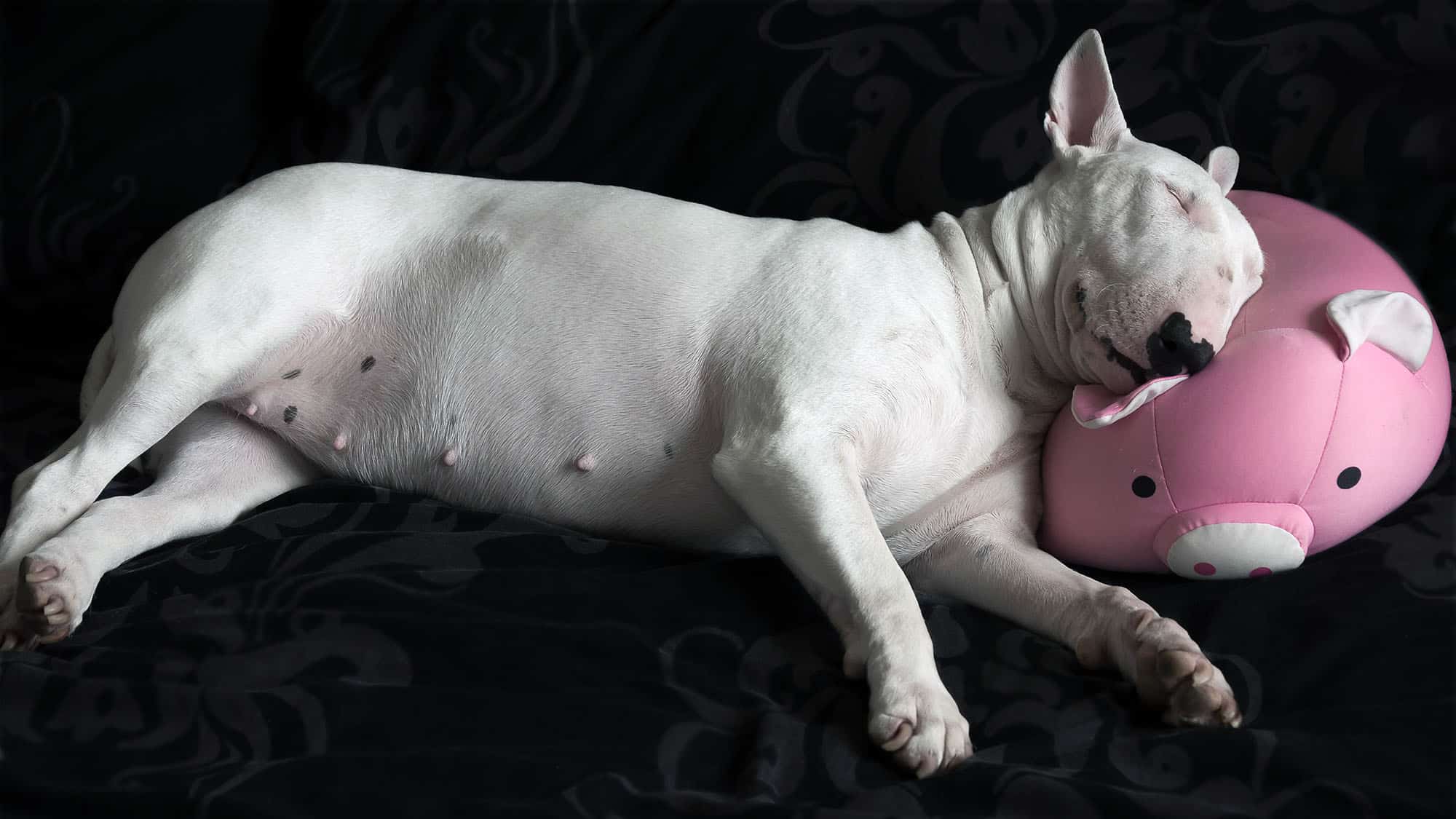 Few dogs are as relaxed as bulldogs. That not only makes the breed easy to handle, it also makes them excellent companions for small children. The canines actively enjoy big families and will often watch out for any smaller kids you might have around.

They also love to play with older children. Sturdy and tough, the breed doesn’t mind a bit of playful roughhousing. However, it is important to never leave your dog and child alone. As sweet as the dogs are, you never know what might happen.

For the most part, the breed gets along with other pets. However, older bulldogs may be aggressive towards dogs they do not know, and some do not get along with cats.

It is also important to never feed your bulldog around children or pets. They have extreme food possession and can lash out if they feel threatened while eating.

5. The History of the Bulldog

Purebred English bulldogs first came about during the seventeenth century, where they competed with the now-extinct Old English Bulldog. At the time they gained popularity in the brutal blood sport of bull baiting, which is how they got their name.

Once such events became illegal, people in England had little use for the dogs. Luckily, they became popular in the New World. Not only did they make great work dogs, their sturdy frame and kind nature made them solid household pets.

Even so, the breeds numbers remained low for quite a while. Selective breeding kept the breed going during the early parts of the 20th century. It was those efforts that led to the specific types we have today.

Such practices are also the reason the modern French and American Bulldog breeds.

Though first bred for aggression, bulldogs became gentle and loving over time. That demeanor is the reason for their popularity, and why they still make such great companions.

6. The Regular Expenses of Owning a Bulldog

Bulldog puppies cost anywhere between $1,500 to $4,000. Though they can go a bit lower, that is the best range for a reputable breeder.

There are quite a few prominent Bulldog rescue groups dedicated to finding the dogs forever homes.