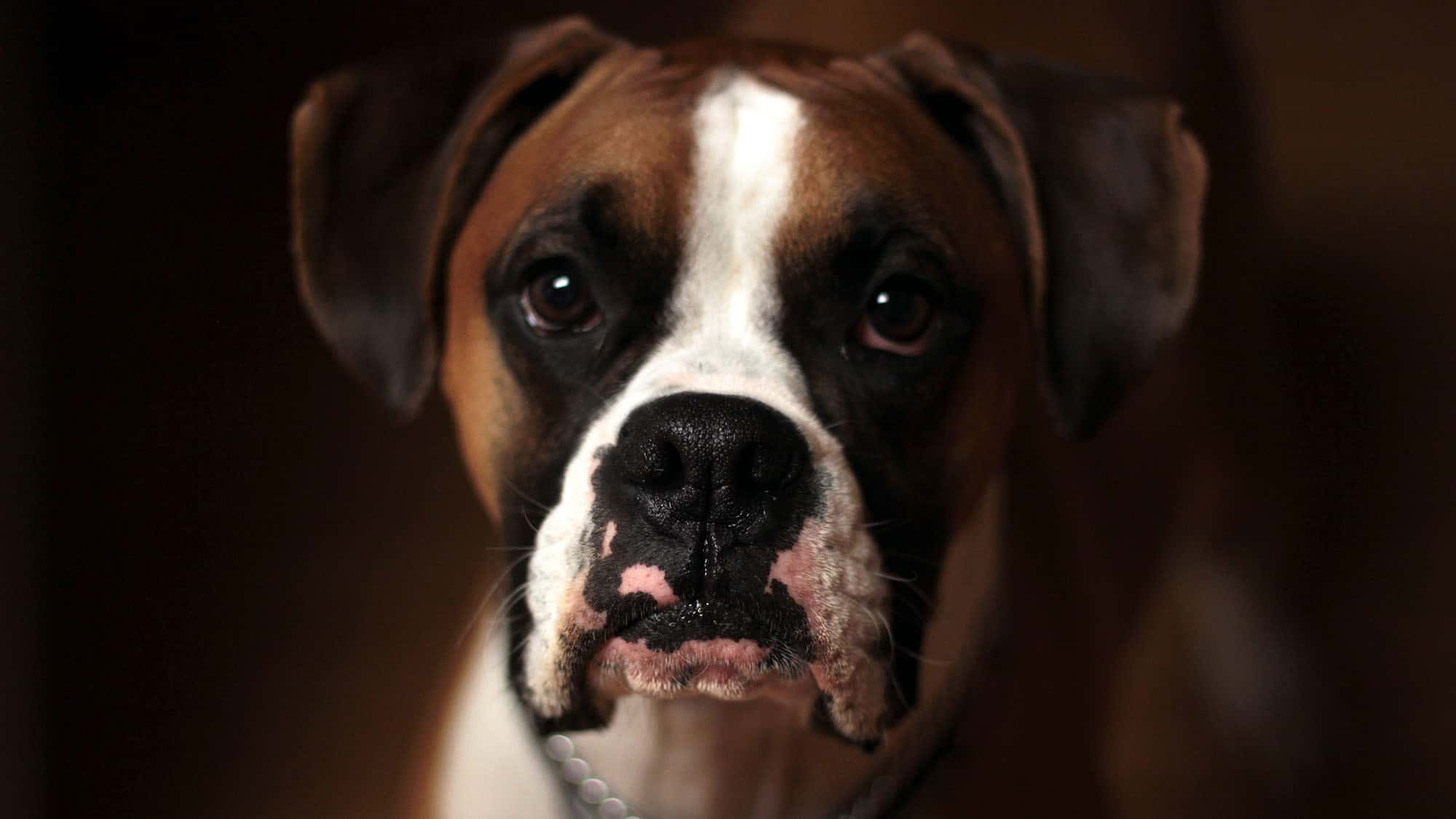 The Boxer dog is one of the most popular breeds in America. They are fun, active canines that love to run outside in wide open spaces. Despite their tendency for play, Boxers can also be quite easy going at home.

Another primary characteristic of the Boxer dog is their loyalty. All canines stick with their owners, but boxers go the extra mile in terms of protecting the home. That built in loyalty ensures a good relationship with any humans they trust.

Though all Boxers look alike, there are many different types of Boxer Dog. All breeds are similar at first glance, but they do differ in terms of coloration and place of origin.

For instance, the American Boxer, German Boxer, and European Boxer all have slight differences, as do the Black and White Boxer and Brindle Boxer. Even so, Boxer characteristics are so similar that they are lumped into one large category. 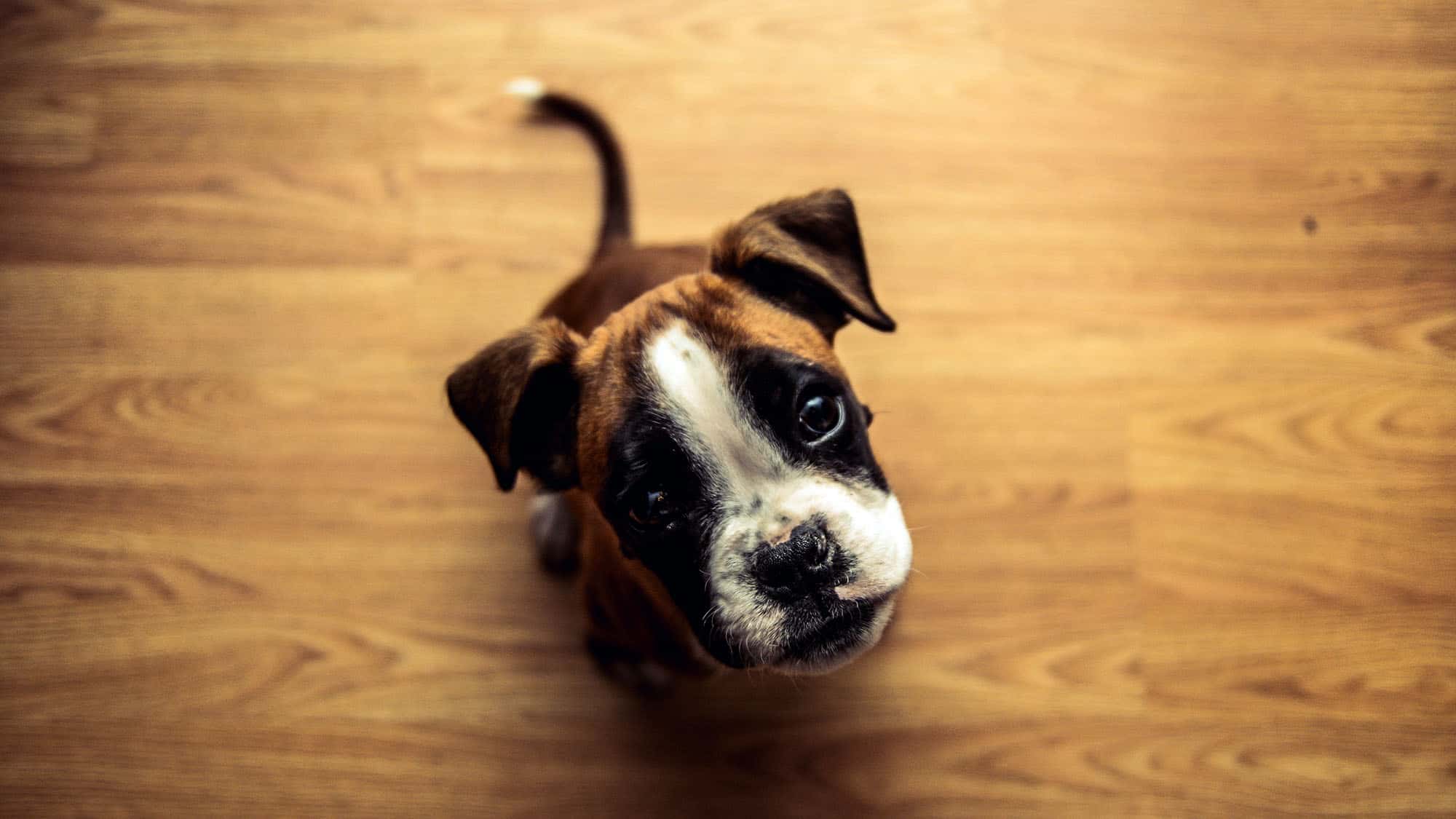 At their core, Boxers are extremely playful dogs. The breed is full of energy and loves being outside.

That tendency makes them extremely friendly dogs. While they are not always quick to get comfortable when first introduced to a new home, once they settle into a space they are quite affectionate.

The breed is also incredibly loyal. They will actively defend their house and prefer to be in the presence of their owners when possible.

That trait, while important, means Boxers need quite a bit of attention. Be prepared to spend a lot of time with your Boxer Dog to make sure they get a necessary amount of attention. Leaving them alone too long can cause them to become irritable or destructive.

Boxers can yip or growl at times, but they rarely bark too much. They typically only make a lot of noise if someone they do not know is approaching their house.

Boxers like to run, but that does not mean they need an excessive amount of food to thrive. In asking “how big do Boxers get” it typically depends on their diet.

Typically, Boxer puppies require four cups of food a day up until they reach six months. After that, they only need two.

Good commercial dog food is more than enough to keep them healthy, but the best organic dog food goes a long way too.

Note that Boxers can have grain allergies. Always try to give them a grain-free diet with a lot of high, real-meat content. If you aren’t sure what is in your dog’s food, do your research, such as the breakdown in this article, and make sure they get a blend of essential nutrients.

Boxers have a short coat that requires minimal maintenance. That hair length means they do not require constant baths that longer-haired breeds need to keep clean.

Even so, it is still important to bathe your Boxer Dog every few weeks to keep its coat clean. That number can also go up if your pup likes to roll around in the mud or plays outside.

Remember, Boxers feel a strong connection to their owners and react based on their feelings. This is important for bathing because if you’re in a hurry or stressed, your dog may react by being difficult or on edge.

Always plan a bath ahead of time to ensure your dog is relaxed while getting clean.

Boxers also need their nails trimmed and should be brushed once a week with a rubber-tipped brush.

One of the key boxer traits is their energy. As a result, they need quite a lot of exercise in the form of both walks and play.

Taking your Boxer outside at least once a day is a must. Be sure to take them on long walks or runs when going outside. The dogs need quite a bit of exercise. Just going around the block once or twice won’t cut it.

A large backyard with plenty of space to run is best for a Boxer. That way, even on days where you cannot walk as long as they like, they are able to run as they please.

As they have so much energy, it is key to train Boxers early in life. They are much more receptive when they are puppies, and can become a bit more unruly as they age.

Socialization is always important with active dogs, and that is the case here.

In that same vein, try and incorporate exercise routines directly into your dog’s training to make it a healthy and fun experience. 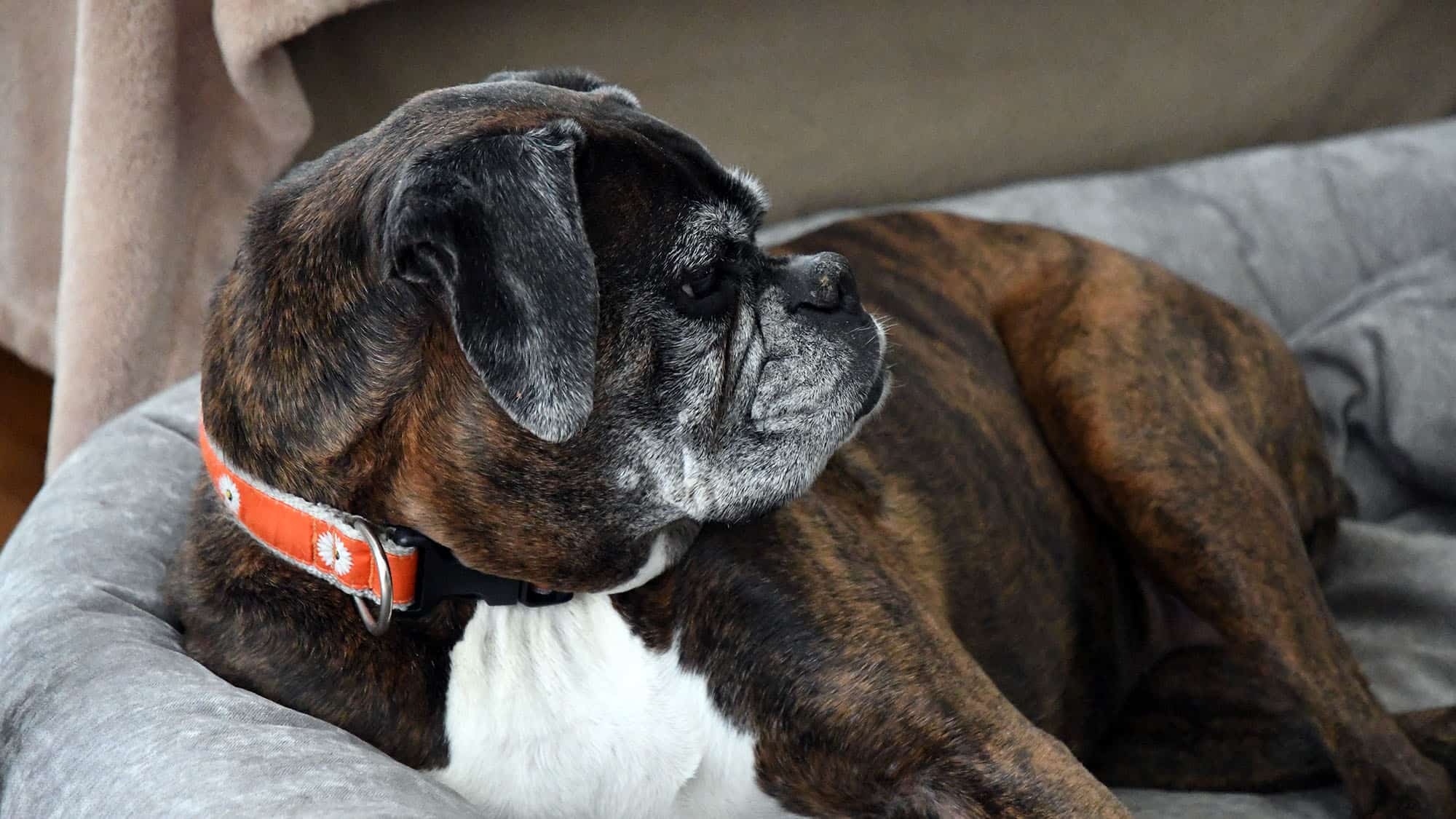 3. Common Health Issues of the Boxer

Many people may ask, “how long do Boxers live?” The Boxer life expectancy is commonly 10 to 12 years. Unfortunately, they do suffer from a series of different medical conditions that can have adverse effects on their health.

Boxers tend to suffer from heart problems much more than other dog breeds, which is the reason for the lower Boxer lifespan. One of the most common is a condition known as aortic stenosis.

That disease, which comes from an obstruction under the heart valve, can be handled if caught early or with regular check-ups. However, if untreated it can lead to sudden death.

Another common Boxer heart condition is known as dilated cardiomyopathy. Here, the dog’s heart is not able to effectively pump blood throughout the body. Like aortic stenosis, it can be lethal.

Boxers also suffer from an endocrine disorder known as hypothyroidism. Unlike other common diseases, it comes with a wide range of symptoms that make it hard to pin down.

Boxers are some of the most active dogs around. If you notice yours lounging more often than usual or actively resisting exercise, it is best to take them in and get them checked by your vet.

As with many other dog breeds, Boxers suffer from hip dysplasia. Canine’s with the condition tend to experience rapid degeneration of their hip joint, which can impair both running and walking.

If your boxer experiences pain in that region, it is best to take them to a vet. Medicine can help alleviate discomfort, and sometimes surgery is an option.

Boxers are one of the many dog breeds that also develop cancer as they age. They can develop quite a few kinds, including lymphomas, skin cancer, tumors, as well as general cancers of the heart, brain, blood, and spleen.

Always be vigilant in checking your dog for any odd lumps or growths on their body. Most are not cause for concern, but early detection goes a long way. 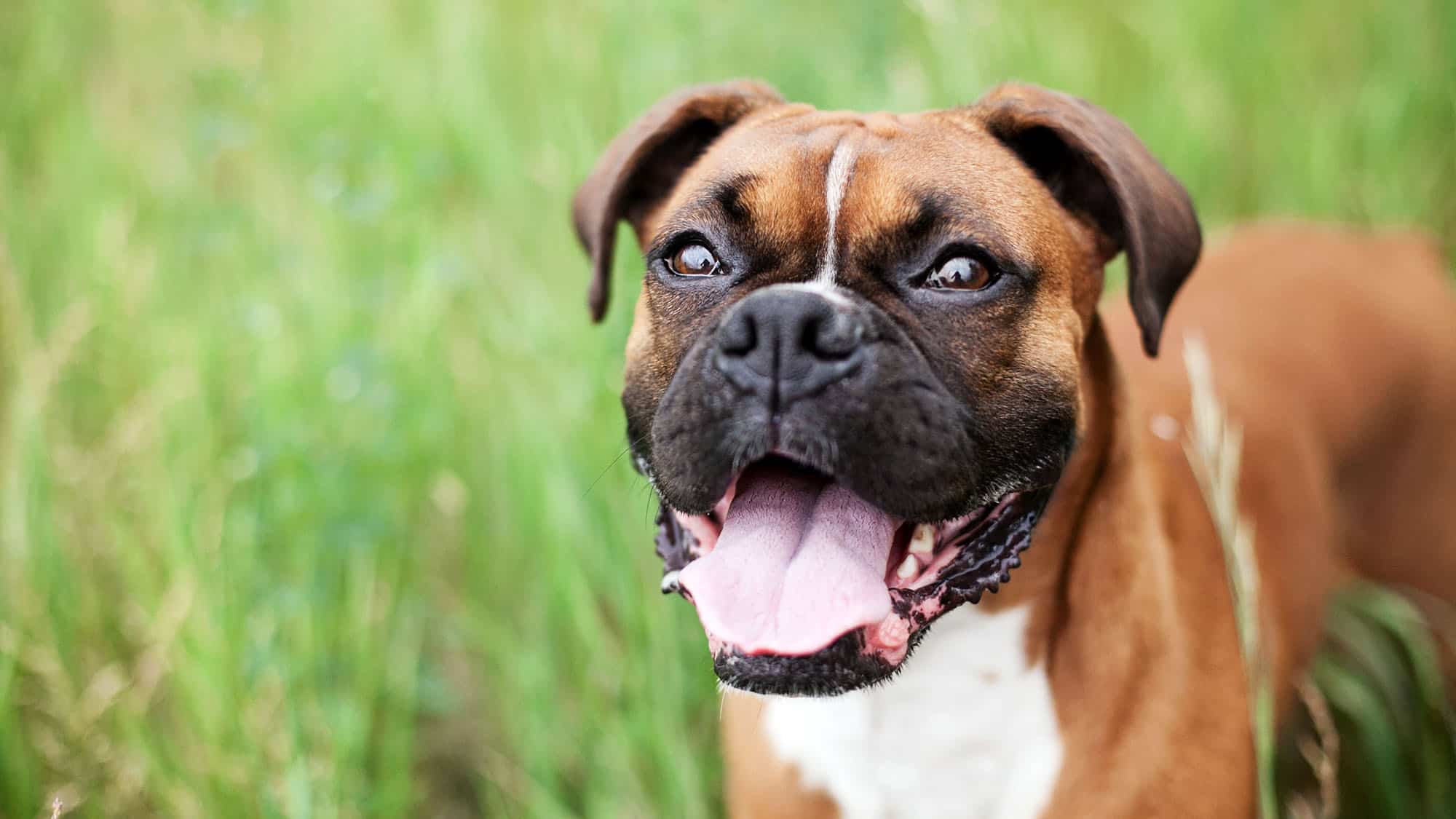 If socialized at an early age, boxers make for wonderful family dogs. The breed may be a bit too energetic for young toddlers, but they are quite compassionate and loyal towards older children they know.

The breed is especially great for kids who like to play outside, or ones who want to run around. Note that, despite their reputation, boxers also tend to settle as they get older. Middle-aged dogs are great around children of all ages.

Boxers play great with other dogs and even cats. However, if they are not properly trained while young, they can be a bit off standish or aggressive with dogs of the same sex. They will chase smaller pets if given the chance.

5. The History of the Boxer

The German Boxer first came about during Germany during the late 19th century. Though their origin is unknown, it is commonly believed they are descendants of the Mastiff, Bullenbeisser, and Bulldog.

First used for blood sport, they soon became a working dog in slaughterhouses and other similar establishments. Butchers used them for various odd jobs both in the field and at the store, and they were typically in charge of guiding cattle from the countryside into town.

The breed’s loyalty made them local favorites, but they did not take off until after World War 1 when they gained popularity in the United States.

The American Kennel Club first recognized them in 1904 and they became a national breed from that point forward. That then allowed them to transition from a work to a household dog. Their fierce loyalty and fun-loving demeanor have kept them there ever since.

6. The Regular Expenses of Owning a Boxer

Purebred Boxers tend to vary wildly in price, as do Boxer mix puppies. Some breeders charge for around $800, but they can go as high as $2,800.

As boxers are so popular, they can be found all over the country. Even so, there are a few key organizations committed to finding them great homes.