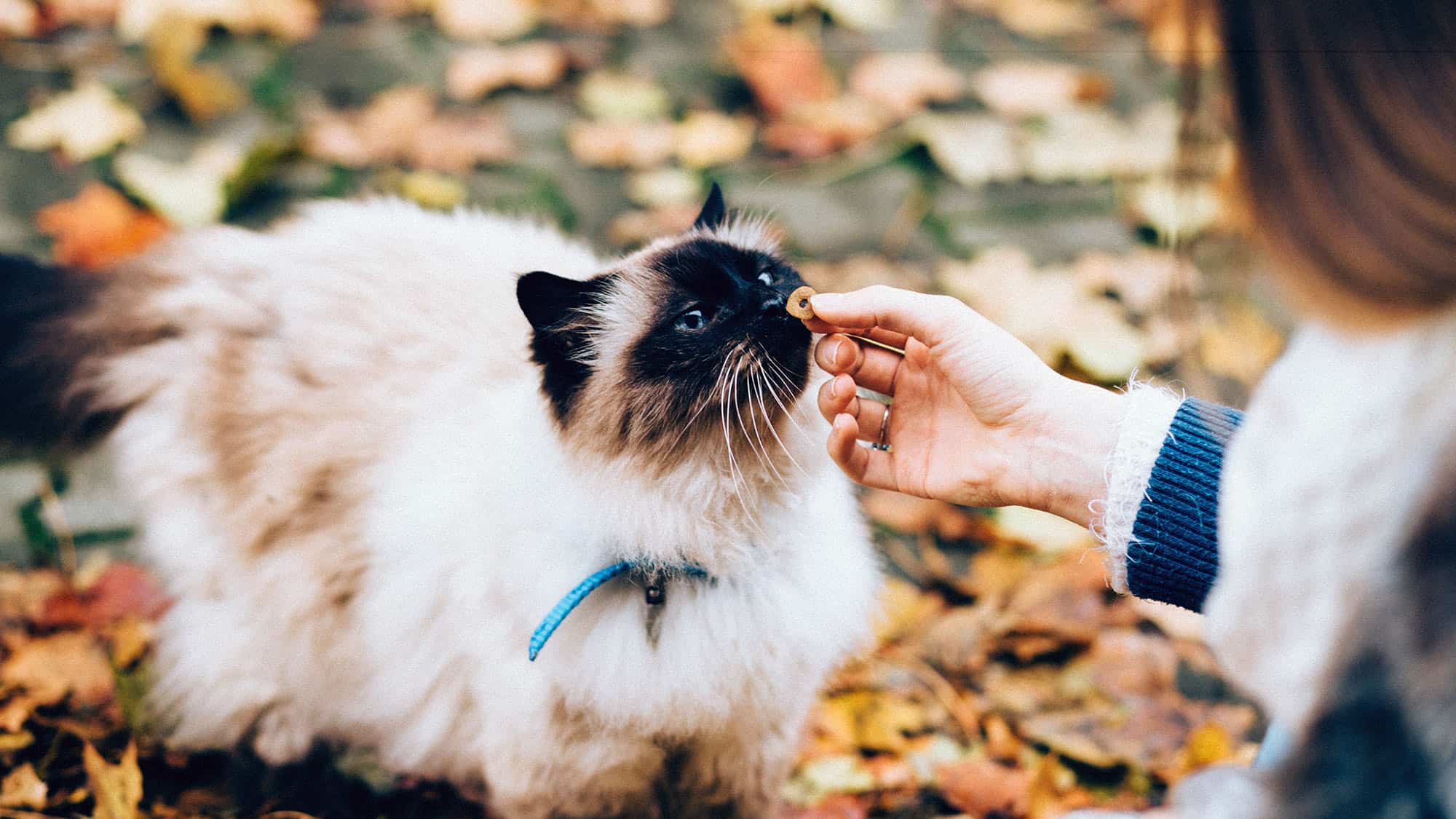 One of the most revered cats in the world, Birmans are sacred in Burma. The breed spent a lot of time as temple companions before spreading out to other parts of the world. They are best known for their bushy fur and sweet disposition.

Great for families of all sizes, Birman Cats are a social breed. They get along with adults, pets, and children.

The Birman Cat temperament is one of affection. Unlike many other breeds, the felines actively nuzzle and cuddle those they love. That connection is so strong that they do not do well on their own. While some breeds are independent, Birmans need to interact with their owners on a daily basis.

The cats can also be energetic, but enjoy relaxing in warm or sunny spots. That mix means they are relatively low maintenance as long as they have some type of energy outlet.

Other Names: Sacred Cat of Burma 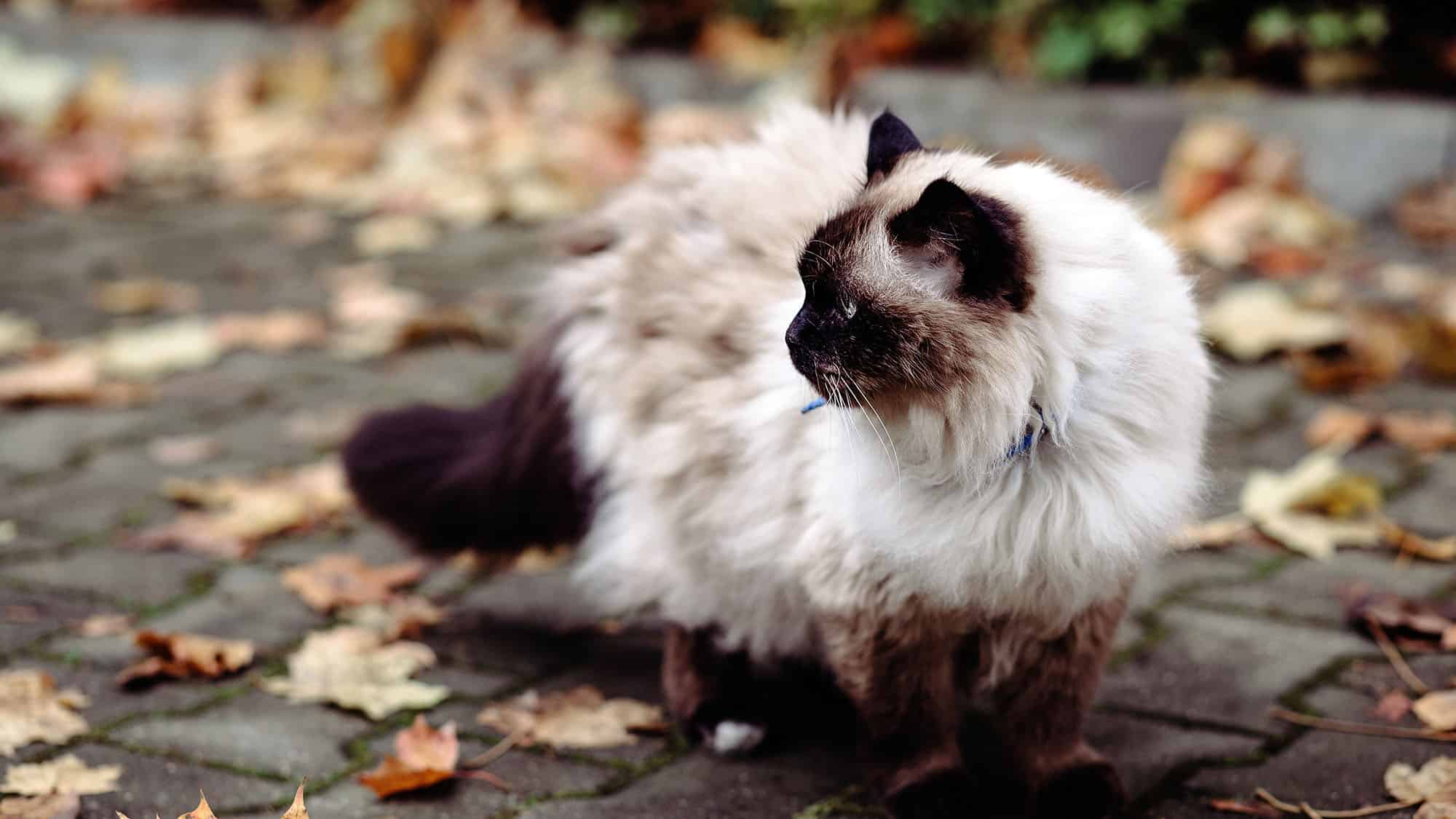 The Birman Cat personality is marked by a gentle disposition. Few cat species show affection towards their owners in the way Birmans do. The breed loves to cuddle and will spend extended time in your lap.

Many cats love to be on their own, but that is not the case with Birmans. The frisky felines need a lot of attention, making them great pets for large families that can dote on them each day.

Birmans tend to be calm as well. You are likely to find them lying down on the couch or stretched out in a warm spot around the house.

Despite their need for attention, the cats are quiet. However, if they want something (especially food) they will let you know with their soft, chirp-like voice.

2. How to Care for a Birman Cat

Birmans are not picky eaters, but they do better with certain foods over others. Always choose premium brands that mix vegetables with quality proteins.

Moist and oily foods, especially ones without any grains or fillers, are great as well. Just avoid a. raw food diet. While some breeds thrive on at-home meals, such options can cause digestion problems for your Birman.

The felines should get two medium-sized meals a day. However, as the cats are prone to obesity, always watch their weight and adjust accordingly.

Birman cats are known for their lush, fluffy coat, which is why so many owners ask “do Birman Cats shed?” However, despite their full topcoat, the cats have no undercoat. That makes grooming them quite easy.

Two brushings a week is more than enough to keep your Birman looking fresh during the colder months of the year. Increase that to three or four times a week when it gets hot and they begin to moult.

Though Birmans are clean, a monthly bath helps prevent dirt build-up in their coat. It is also a good idea to wipe their ears once a week and clip their nails if they ever get too long.

Birmans are calm, but they are also energetic and social. That means, no matter how often they sleep in their favorite spot, the felines need to run around every now and then.

If your Birman is an outdoor cat, they will be able to run around on their own. If they live inside, it is best to play games with them.

Do not feel pressure to exercise your Birman. Most of the time they will let you know when they want to play.

Birmans are intelligent cats with an inherent need to please their owners. That means you can train them with a little work and determination.

The cats love to spend time with you, no matter what you’re doing. As long as you make your training sessions fun they will stay engaged then entire time. You may see it as business, but to them it’s all play. 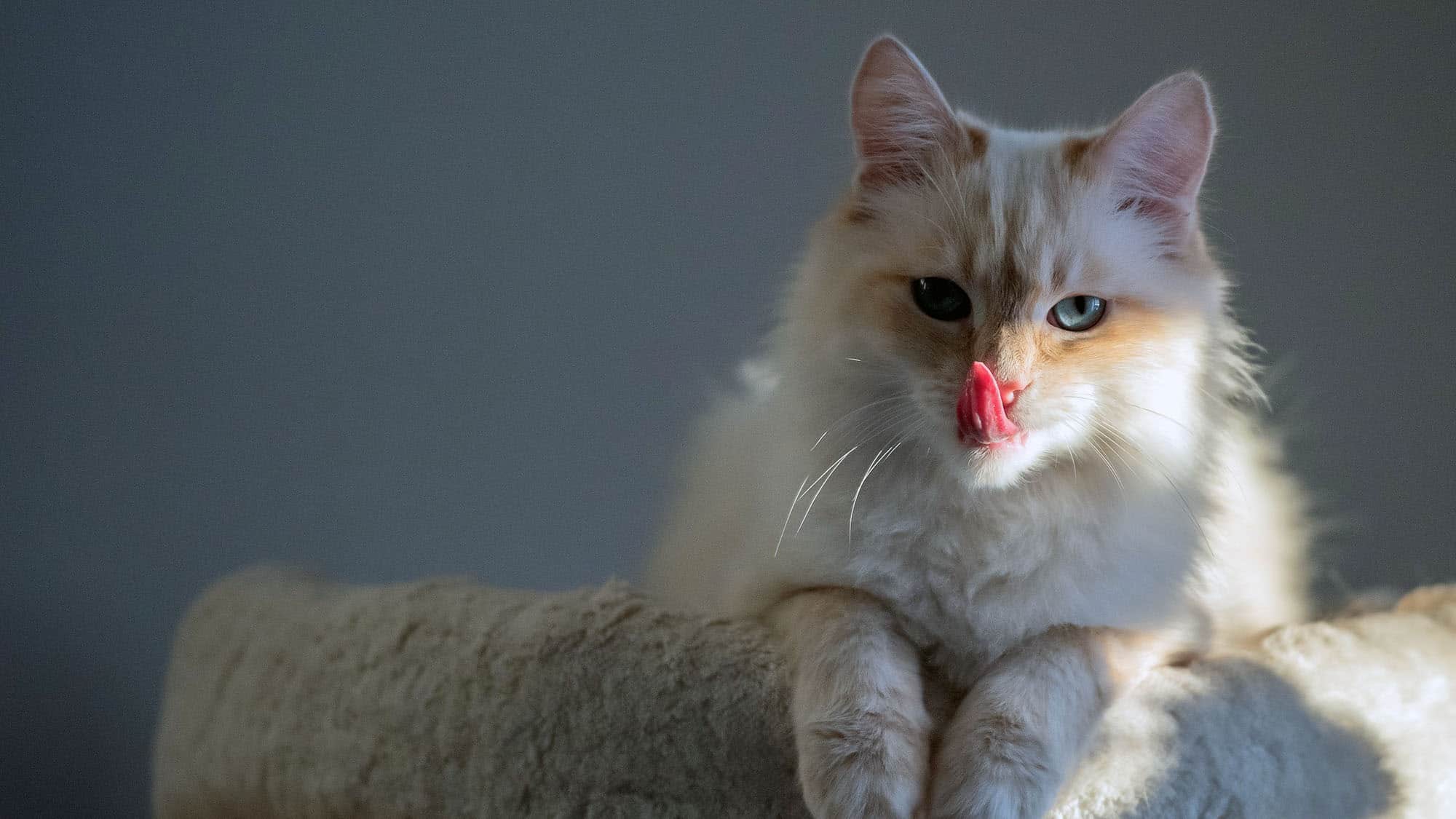 Birmans can live a long time if their health is in order. To ensure that happens, it is important to understand the different ailments that negatively affect the breed.

Overeating is without a doubt the largest threat to the normally long Birman Cat lifespan. The breed is denser than similar species, which makes them prone to obesity.

That is why exercise is so important with the breed, and it is also why you must always stay on top of their diet. It does not take long for a Birman to gain weight.

If you see your cat putting on pounds, take the necessary steps to cut them back. A vet can also help you come up with a personalized diet plan.

Hypertrophic cardiomyopathy is extremely common across all cat breeds, and that includes Birmans.

The condition causes the heart walls to thicken in a way that increases the muscle’s size. Such a change affects the entire body, and can lead to a range of health conditions. Some cases are quite mild, while others are much more severe.

HCM is a genetic condition. A quick trip to the vet with your kitten will tell you if they have it or not.

Birmans are also prone to kidney disease. This issue tends to manifest as the cats age, but it is present in kittens as well.

For that reason, it is important to get your Birman screened while young. Any impaired function that shows up on blood tests can be noted, giving your cat a better quality of life.

It also helps to know your cat’s hereditary lines before taking them into your home. That knowledge, along with using a trusted breeder, will lower their chances of kidney disease. 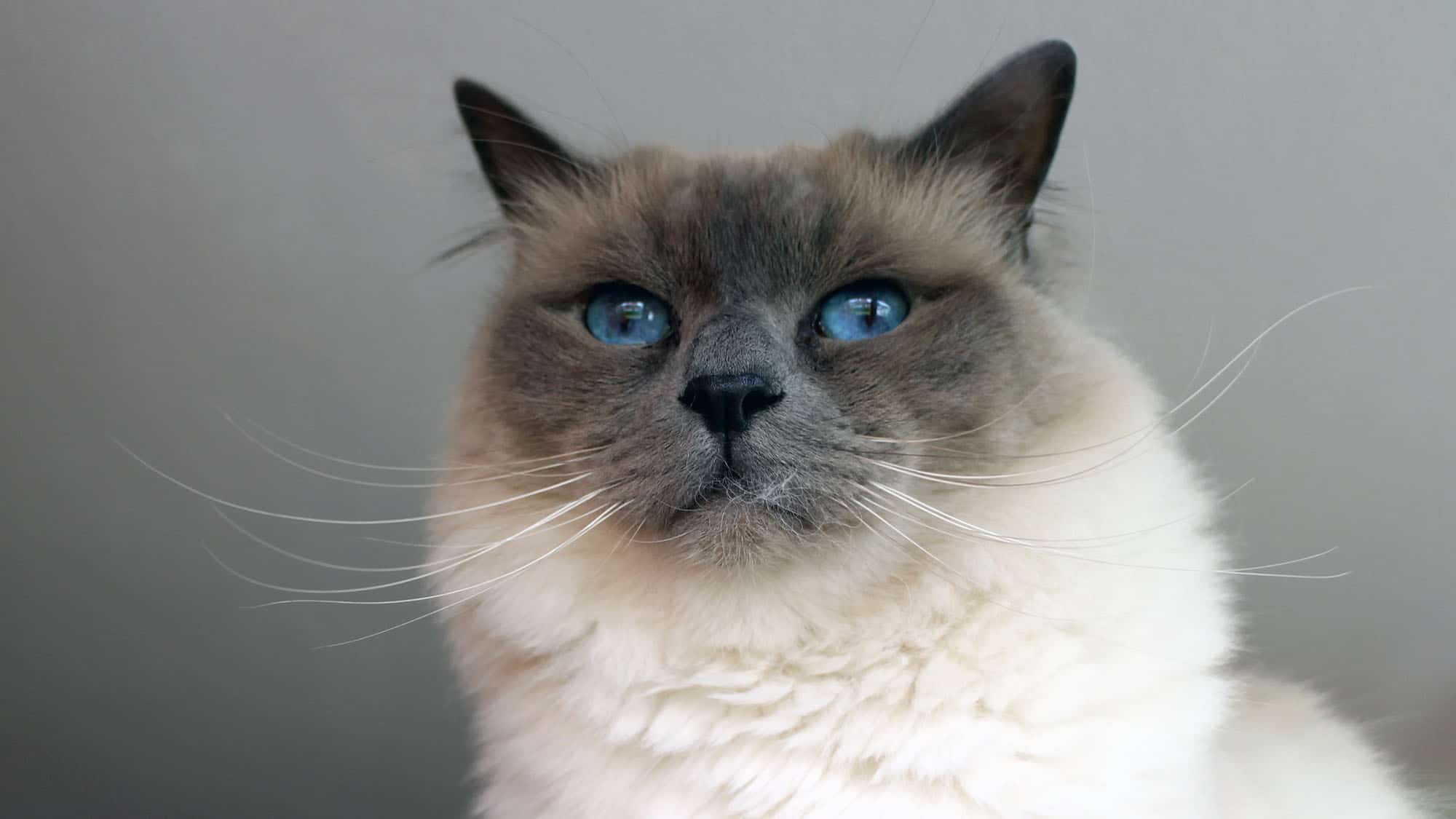 The Birman’s affectionate nature extends to both children and pets. Kids do extremely well with the breed because the cats can keep up with constant playtime. They thrive on the attention as well.

As they are gentle, Birman Cats also bond with children. You are just as likely to find the felines running around with your kids as you are to find them curled up together.

The cats’ constant need for attention is so powerful that they love having another pet in the house. In fact, an extra playmate is a perfect way to keep them busy.

Birmans do well with both dogs and cats. There will be no problems if you raise them together. However, if introducing a pet to your Birman later in life, always do a slow introduction to give them a chance to get used to each other.

5. The History of the Birman Cat

While no one is sure where Birman cats first came from, they have been revered in Burma for a long, long time. Many believe they originated as temple companions for priests before moving out to the rest of the world.

Though no one can prove that one way or another, records show the cats came to Nice, France during the 1920’s. The French immediately took to the loving breed, which made them popular throughout Europe.

Birmans were also completely wiped out during World War Two, but they bounced back after the end of the war thanks to different cross-breeding efforts. Seal Point Birmans came about first, quickly followed by the Blue Point Birman, the Black Birman Cat, and the White Birman Cat.

6. The Regular Expenses of Owning a Birman Cat

Birman kittens typically cost between $400 and $600. However, there is a bit of wiggle room depending on where you look.

There are quite a few Birman Cat rescue groups that dedicate their time to bringing the breed into good homes.