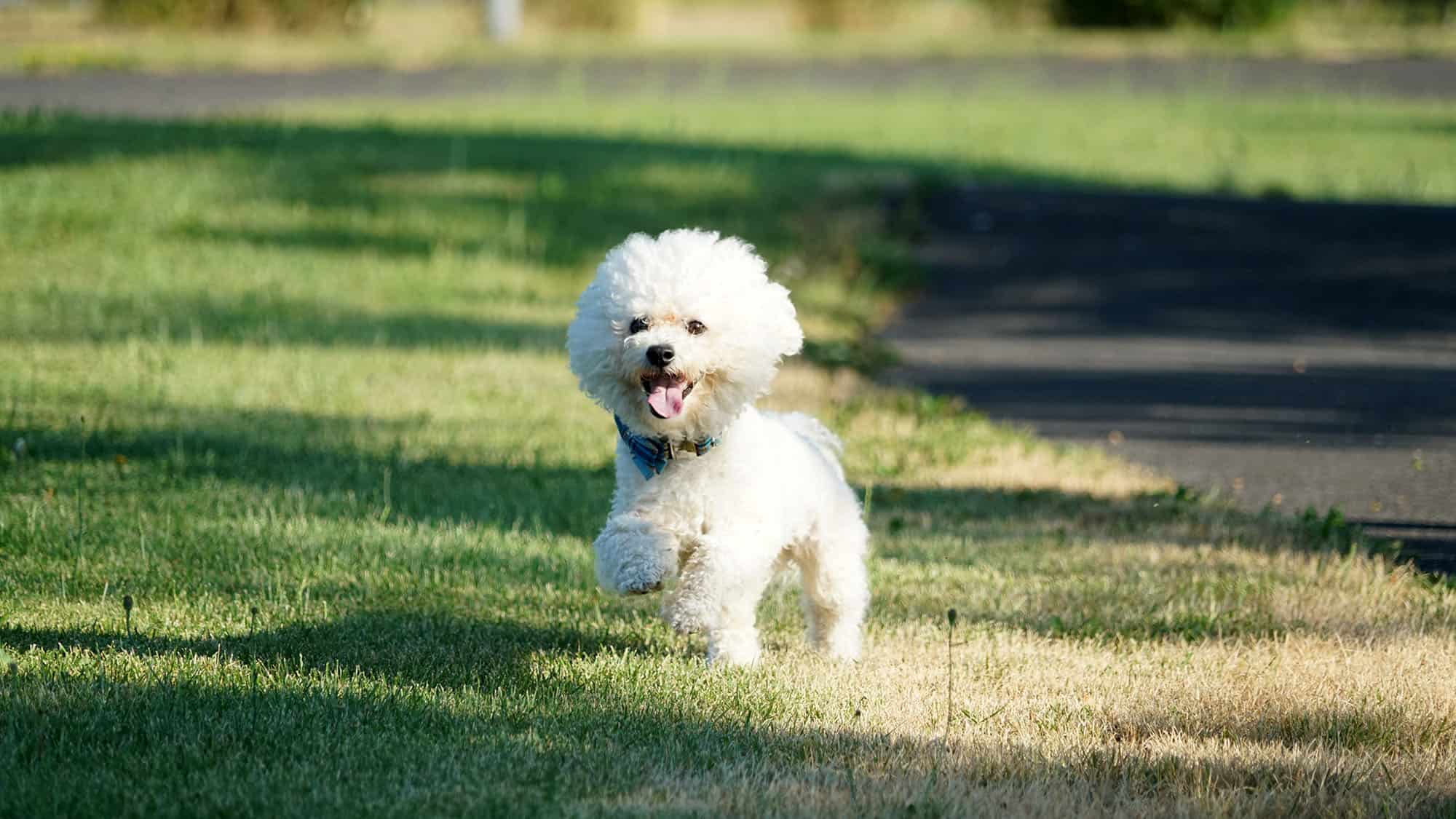 Bichon Frises are happy, intelligent dogs known for their playful nature and adorable appearance. The toy breed is incredibly friendly and quite affectionate, two traits that make them perfect house pets.

The dogs love humans and are quite co-dependant. It is common to find them cuddling with their owners. While their skittish nature can make them a bit too jumpy around small children, they play well with older kids and adults.

Used as entertainers, the dogs are also quite easy to train. They quickly learn all sorts of tricks and have no problem following orders. Just be sure to use positive reinforcement, rather than negative, with the small breed.

Bichons do not need as much exercise as other breeds. Even so, they still enjoy being outside and like brisk walks. Dog parks are particularly great places for the breed because they enjoy the company of other animals.

A Bichon Frise is the perfect dog for any owner who wants a loyal housepet that they can shower with affection. 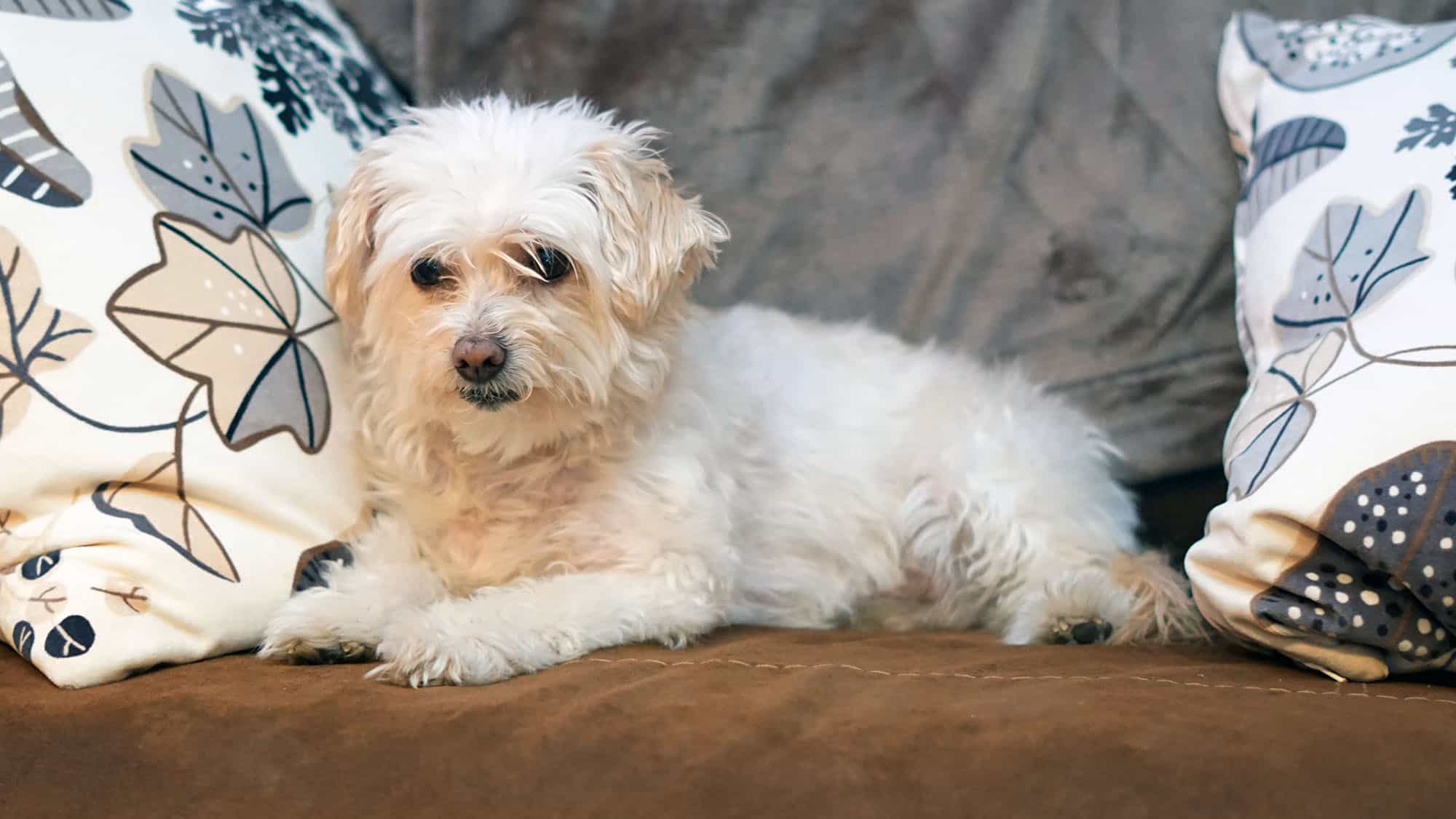 Bichon Frises are one of the friendliest breeds on Earth. The pups were first bred to entertain humans, and they carry that in their blood to this day. They love being around their owners and enjoy spending time with the entire family.

Playful and carefree, the dogs can be a bit jumpy at times. They are prone to a few dependency issues like small dog syndrome. However, if you give them attention, buy them a special dog crate for separation anxiety, and are careful about spending time with them they should significantly calm down.

Bichons are gentle creatures that love to lounge around in small dog beds like the ones in this article. As they are so connected to their owners, the dogs tend to feed off your energy. Understand that they can be hyper or extremely lethargic based on the feeling in the room.

2. How to Care for a Bichon Frise

While Bichon Frises do not need a lot to eat, it is always good to monitor your dog’s diet. That will not only prevent obesity, but cut back on some of the more common Bijon Frise health issues, like back problems and allergies.

Balance is key here. Bichon Frises operate best on two meals a day packed full of different nutrients, vitamins, and minerals. That can be the best dry dog food like high-end kibble, or you can go with wet options. Mixing both types works as well.

Just be sure that your Bichon Frise gets their protein from meat like poultry, beef, and fish. Most of the best dog food for small dogs comes with those foods. They also tend to have healthy fat, which helps Bichons keep a healthy coat.

Bichons are adorable, but they can be difficult to care for if you aren’t experienced. Research how to groom a Bichon Frise before bringing one into your home.

Bichon Frise puppies have a thin coat that does not require frequent brushing. However, their top coat comes in as they grow. During that time, you should brush them at least once a day to prevent both tangles and mats. Then, once their fur fully grows in, you can limit it to twice a week.

Also first brush your Bichon before a bath. From there, wet them down in the tub and apply shampoo to their fur. Rinse it out, and dry them off with either a light blow dryer or towel.

Such baths should occur at least once a month, but it can be more if your dog likes to play outside.

You should also regularly clip down your Bichon Frise’s nails when they grow too long and keep their fur in check. If you aren’t sure how to trim their coat, the clippers in this article will give you great results.

As high maintenance as their coats are, Bichon Frises are one of the most hands-off dogs when it comes to exercise. The breed is quite playful by nature, but they do not need the same amount of running as larger breeds.

Typically, Bichon Frises need to be out and about for 30 minutes a day. That can come in the form of walks or running around the house.

As they have such a strong attachment to their owners, the breed loves to play games like fetch and tug-of-war as well. They should get outside when possible, but that works as a stand in.

Bichon Frises are extremely responsive to all types of training. They do great with general obedience training, and can quickly learn all sorts of tricks.

Just be sure to use the proper methods. Though Bichons are small, it is often wrong to treat them too gingerly. Constant doting will cause your dog to be entitled or standoffish.

That being said, Bichon Frises do not do well with harsh training. It is better to use a reward-based system to keep them in line.

There are many ways to train your Bichon. Always do the proper research before you begin. 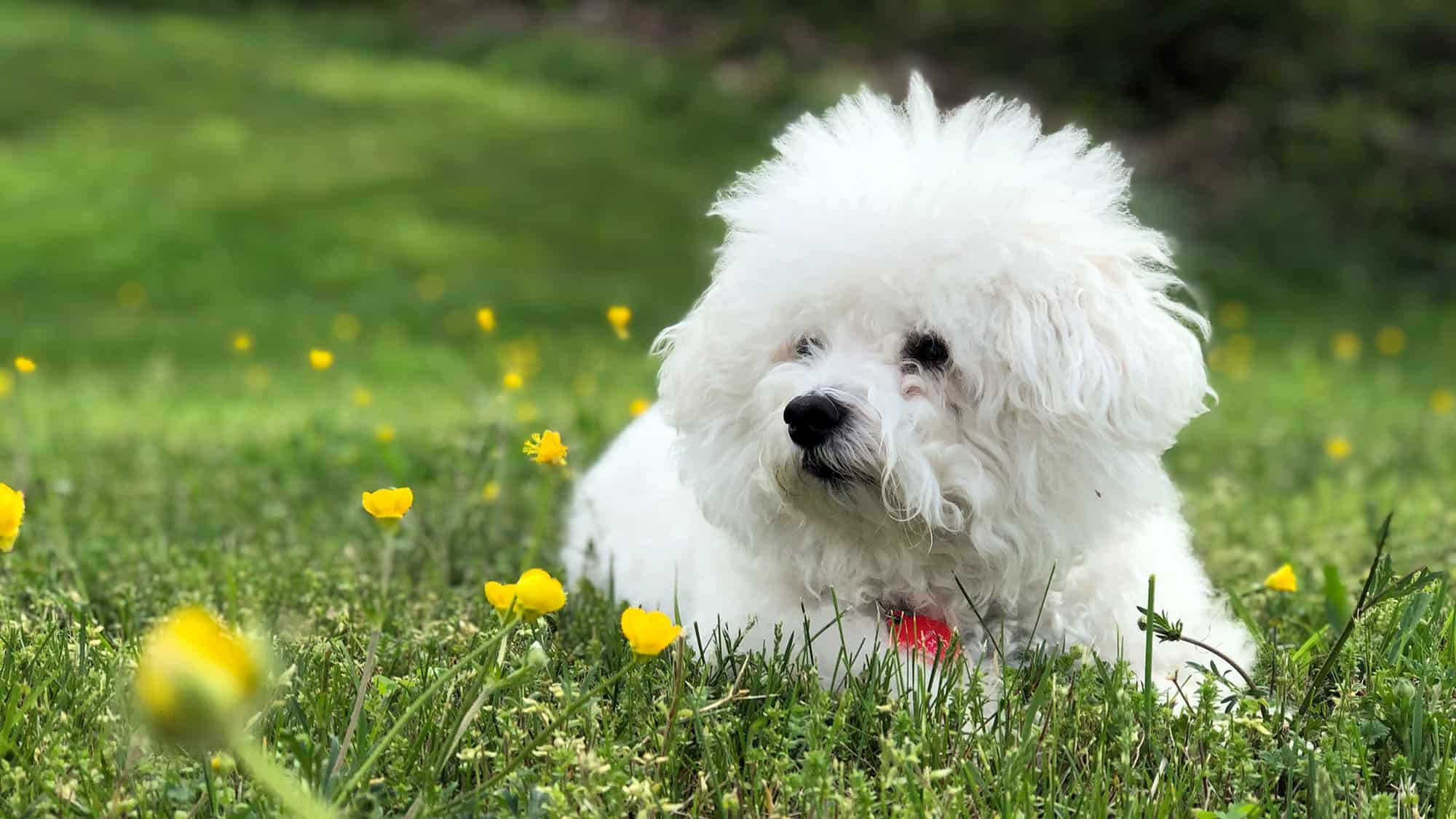 The Bichon Frise lifespan sits between 12 and 15 years, which is much higher than other breeds. They are generally healthy animals, but they do have a few issues that can pop up from time to time.

One of the most common problems within the breed is patellar luxation. The condition occurs when the knee joint slides out of its proper place. That shift causes a lot of pain for Bichon Frises, and can restrict their movement as they age. If you see your dog in clear pain when trying to move, it is best to get them checked to prevent arthritis from setting in.

Kartagener’s syndrome is a condition where mucus steadily builds up in the respiratory tract. Though the disease is rare for most canines, it is quite common in Bichons.

The syndrome is marked by frequent respiratory infections. If your dog suffers from such symptoms, it is important to take them to a vet and get them the antibiotics they need.

All Bichon Frises, from the White Bichon Frise to the Black Bichon Frise, are susceptible to allergies. The breed can suffer from food or general allergies, which then leads to sneezing and coughing. Flea bites can become a problem as well.

While most allergies are minor, they can become more serious over time. Always check to see how often your dog scratches certain parts of its body.

Bichons also tend to suffer from general gum disease. It is important to keep your pup’s teeth clean through regular brushings. That will prevent both plaque build-up and infections. 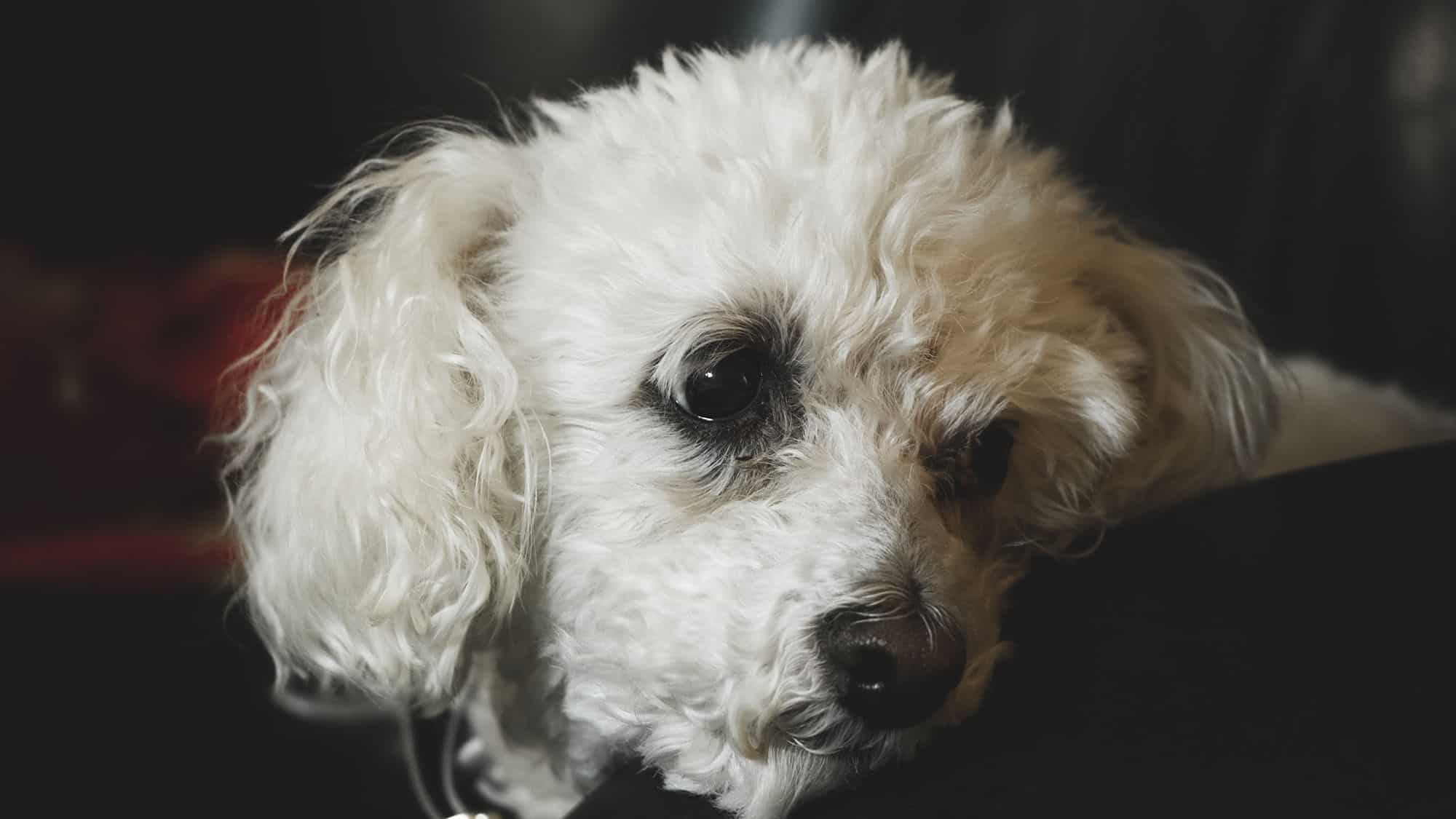 Bichon Frises’ gentle personality makes them great family pets. However, the small dogs are not the best breed to have around small children.

Bichons can become injured during roughhousing or tough play. In addition, the breed may nip or bite at kids if they become hurt or threatened. For those reasons, is best to supervise your toddlers or young children while they are around your Bichon.

However, the small dogs do enjoy the company of other breeds. Though they are not the best around smaller pets like rodents, Bichons tend to get along with other large animals as well.

5. The History of the Bichon Frise

Despite their French name, Bichon Frises originated in the Mediterranean sometime during the Middle Ages. Shortly after, they were brought to Italy and quickly gained popularity among the royal families of Spain, Italy, and England.

The dogs retained that favor until the 1800’s, when they began to spread out to common owners and performers. Their numbers began to decline throughout the start of the twentieth century, but quickly bounced back after World War 1 thanks to the efforts of French breeders.

From there, the breed moved to America during the 1950’s. They were a quick hit in the states thanks to their natural energy, the long Bichon life expectancy, and their loving demeanor.

Today, they are mixed with many dogs to create breeds like the Glechon and Bichon poo. That is because even a Bich Poo full grown keeps the adorable look Bichon look.

6. The Regular Expenses of Owning a Bichon Frise

Bichon Frises vary wildly in price depending on the breeder. Puppies can go for as much as $2500, but also as low as $250. The average sits around $600.

Bichon Frises are extremely popular dogs, but there are still a few Bichon Frise rescue groups that dedicate their time to finding them a proper home.