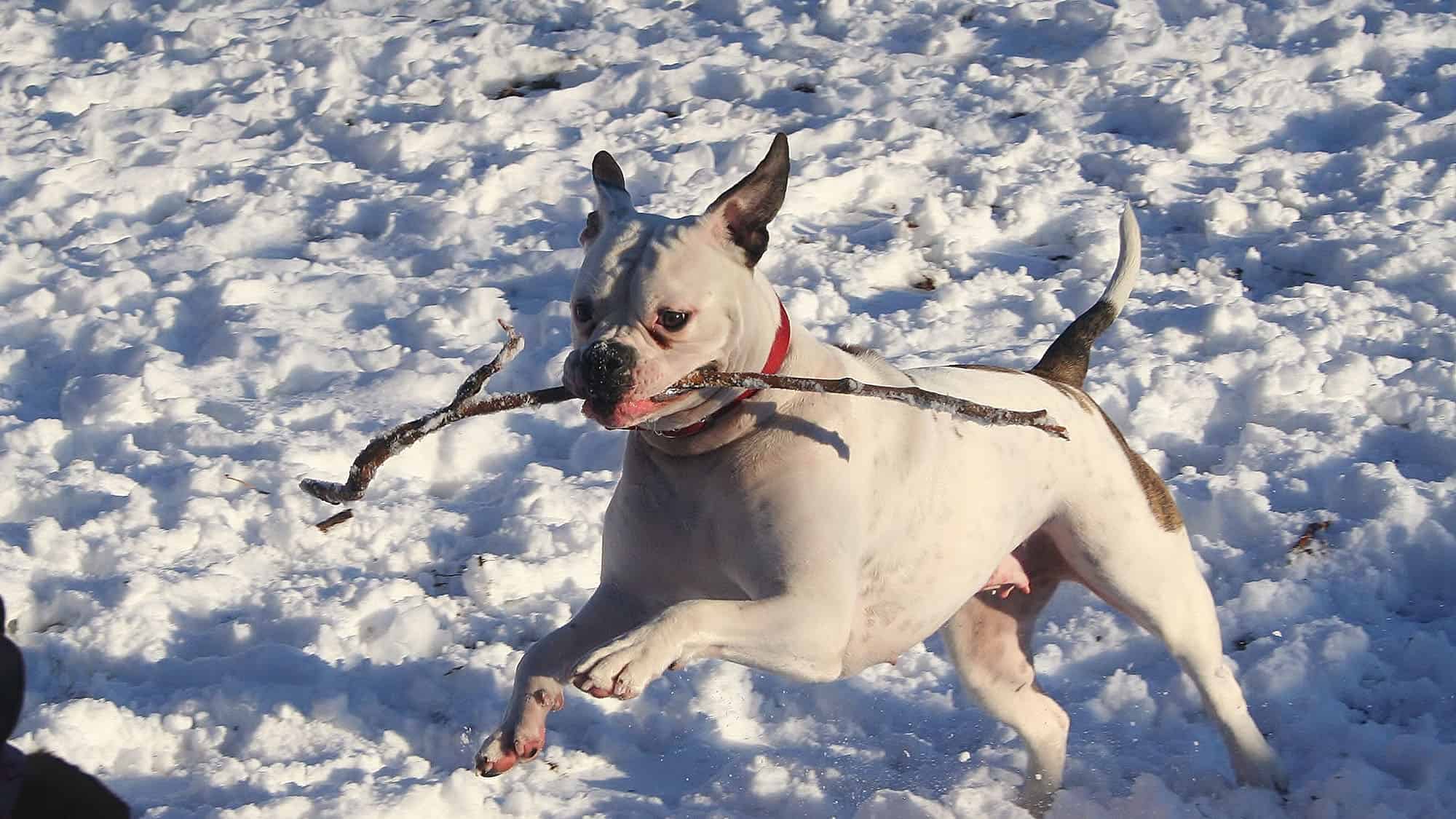 American Bulldogs, contrary to popular belief, are much different than their English cousins. Many associate the breed with short, stocky bodies and smushed-faces. However, that is not the case.

That confusion could lead you to ask “What does an American Bulldog look like?” The answer is a more stretched out version of the English one. Though they have the same relaxed temperament and gentle personality, the dogs are much bigger and have a lot more energy.

Though many people associate bulldogs with being lethargic or quiet creatures, the American is a strong, active dog that is quite easy to keep happy.

To better understand the bulldog breed, it is best to research all different types. This article, along with this breakdown, should help towards that end. 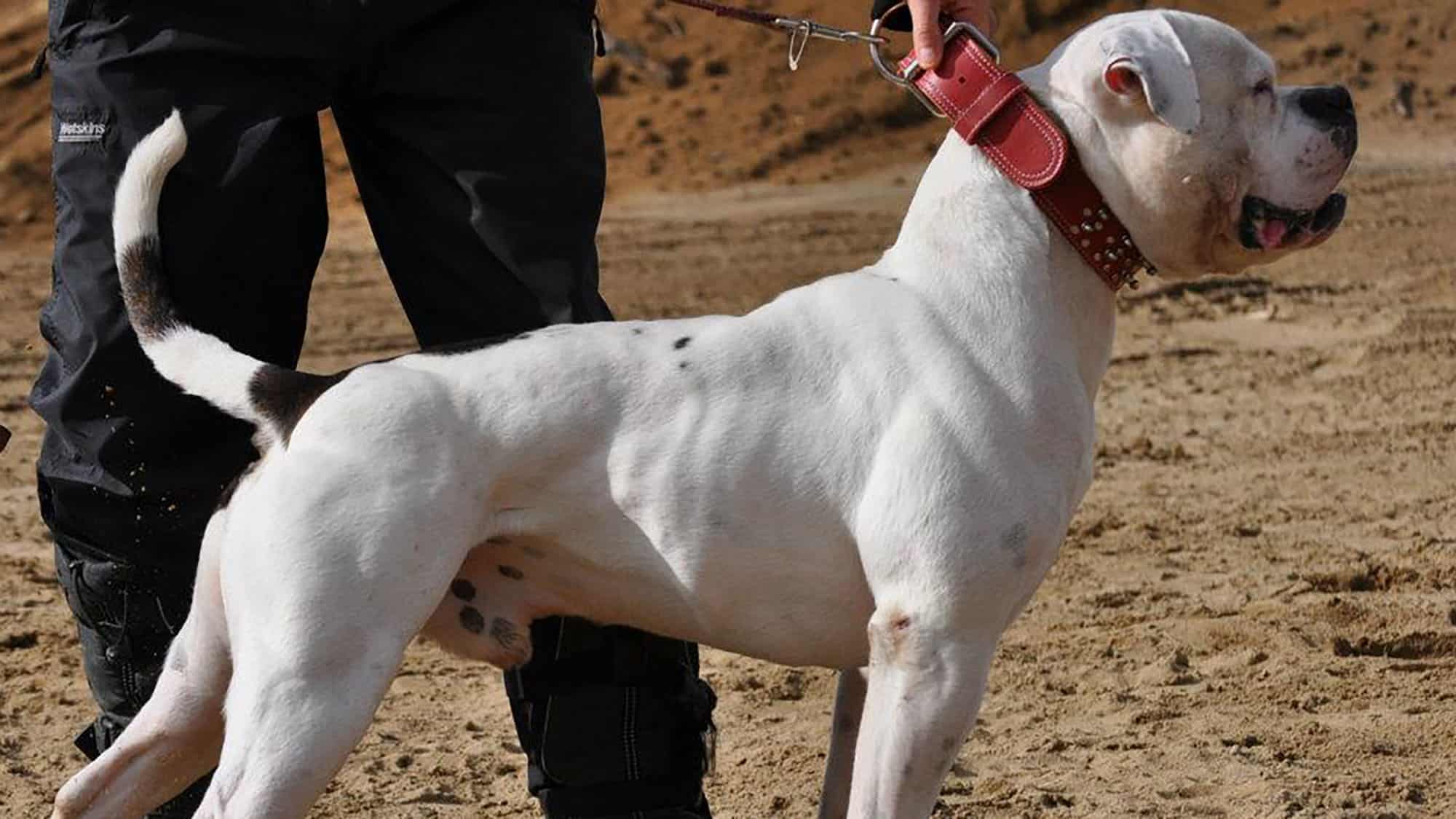 Despite their muscular frame and large size, American Bulldogs are quite friendly. The gentle giants get along with both adults and kids to the point where many consider them to be large lap dogs more than anything else.

The canines are protective by nature, a trait that leads them to distrust strangers, but they get along with any humans they are exposed to early in life.

Just be aware that they are alert animals that will not hesitate to lash out at anything they consider to be a threat.

The breed is also headstrong and loves to act on its own. That can lead to problems if they are not raised properly. However, obedience training early in life makes them one of the most well-mannered and loyal breeds around.

2. How to Care for an American Bulldog

American Bulldogs are large, active animals that need a diet to match their frame. Protein is incredibly important here. The best dog food for the American Bulldog has meat as the main ingredient, but also tends to be low in carbs to prevent weight gain.

Adding fresh proteins to your American Bulldog’s diet can also go a long way towards ensuring they get the nutrients they need. Just consult with your veterinarian first to ensure you’re giving your dog the best diet possible.

The breed has a short coat that is quite easy to maintain. Simply brush your pup with a rubber grooming glove or soft-bristled brush once a week to remove any dead hair that may have built up in their fur.

You want to bathe your Bulldog roughly once every month or so. That frequency largely depends on how often your dog gets outside, as well as how much they run around.

Just be sure to use special canine shampoo. Other types can cause issues to the breed’s sensitive skin.

American Bulldogs love to run. So much so that, if not given proper exercise, they will often tear up your house and yard. To avoid that, take your dog out for about an hour each day.

The breed loves long walks, but they also enjoy playing games like fetch or tug-of-war. Parks and hiking trails also suit the dogs by giving them plenty of space to run.

While many large dogs are content with just being outside, this breed needs to be active at the same time. Do not think a simple walk will be enough.

Run them around while on the leash and make sure they exert a good amount of proper energy. A set exercise plan can also go a long way.

Despite their affection, the dogs are headstrong animals that love to be in charge. That won’t be a problem with proper planning, but it can become an issue if you don’t start teaching right away.

Always begin obedience training early in your pup’s life. Positive reinforcement goes a long way with the breed, so long that it’s consistent and firm. They actively love treats and will work hard to meet your demands if rewarded.

Do not waver with your bulldog, and never give in. Once they recognize you as the leader, they will quickly fall in line. 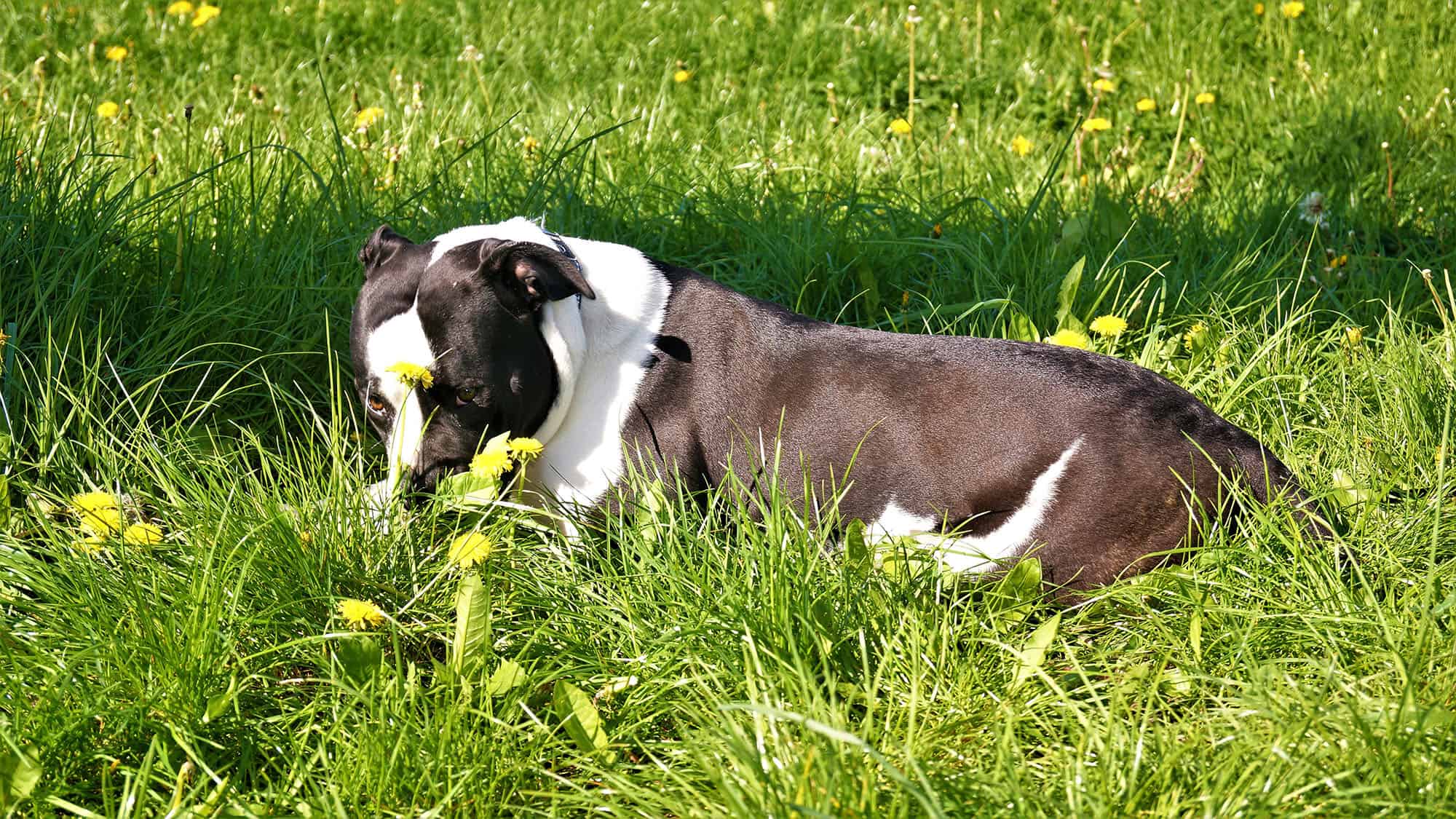 The American Bulldog lifespan is quite long. Even so, it is best to stay on top of their health and avoid some of the more serious issues that pop up in the breed.

As with most large breeds, purebred American Bulldogs are prone to hip dysplasia. The condition occurs when the hip joint doesn’t develop in a normal way. That then causes the bones to steadily break down over time.

Dysplasia is typically noticeable within your dog’s first year of life. It is marked by lack of movement, loss of muscle mass in the thigh area, as well as a swaying gait. If your bulldog has any of these symptoms it is best to take them in for an X-ray.

Bulldogs also tend to contract an issue known as hypothyroidism. This arises when the pup is not able to produce certain enzymes, which then greatly lowers their metabolism.

Dogs with the condition tend to lose weight quite quickly. They also lose hair on their neck, chest, sides, and legs. Though hypothyroidism is a permanent condition, it can be mitigated with a specific hormone replacement administered twice a day.

Many large dog breeds are susceptible to bone cancer, but American Bulldogs are particularly susceptible. Nobody is sure why, but it is something to always be on top of when raising the canines.

The disease takes four distinct forms; chondrosarcoma, fibrosarcoma, osteosarcoma, and hemangiosarcoma. Out of those four, osteosarcoma is the most common form for the breed.

Though cancer is hard to detect in all forms, it sometimes manifests pain and lameness. X-rays are recommended if you see any such issues in your pup. 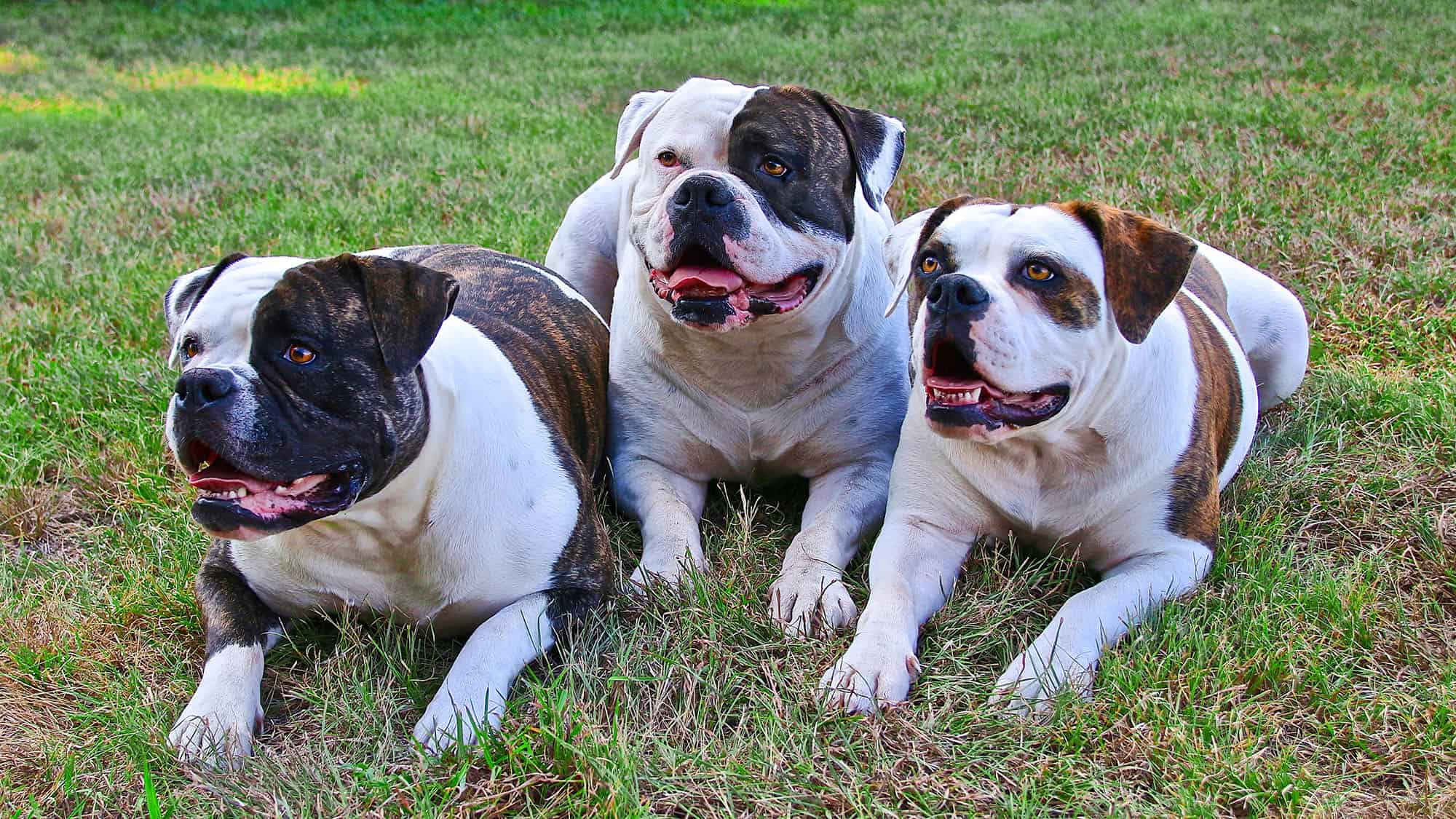 The Bulldog’s loving nature makes them great with children. They protect kids and enjoy running around with youngsters of all ages. As they are so sturdy, they can run around for quite a long time without getting tired or worn down.

However, it is important to remember they are strong, excitable animals that can set off by a screaming or laughing child. Always supervise your bulldog when they are around smaller children.

The breed, due to its protective nature, does not get along with strange dogs or cats. Bulldogs can be quite territorial with other breeds and do not like inviting other pets into their home.

However, they do make an exception to any animals they interact with during their first years of life. If you want another dog, it is best to raise it with your bulldog rather than bringing it in later on.

5. The History of the American Bulldog

There, they found a home with farmers, who used them to hunt and fight off feral pigs. The loyal pups gained their reputation as protectors before their calm demeanor allowed them to steadily transition to more traditional house pets.

However, despite the spike in popularity, the breed almost completely disappeared during World War Two. If not for the work of a few select breeders, they never would have made it. It is at the time following the war where the canines split into the Bully and Scott styles we have today.

Though both lines still exist, most modern Americans come from a mixing of the two lines. That is why the breed took so long to catch on, and why it did not become officially recognized by the American Kennel Club until 1999.

6. The Regular Expenses of Owning an American Bulldog

American Bulldog breeders typically sell puppies for around $800. However, that can go up to a few thousand dollars in some places.

American Bulldogs are loving creatures, but they are not as well known as other types. That is why some choice organizations help them find homes.